“I Tried The Blood Plasma Facial — Here’s What Happened”

Because celebs don't have dibs on the best bloody facials...

"I Tried The Blood Plasma Facial — Here's What Happened"

Because celebs don’t have dibs on the best bloody facials…

So, what exactly is a Blood Plasma Facial? Well, technically it’s not a facial in the traditional sense of the word. PRP (Platelet Rich Plasma) Therapy purports to rejuvenate the skin by injecting your own blood plasma under your dermis, to stimulate cell growth and collagen production. And it’s become quite a sought-after non-surgical procedure.

It promises to improve complexion and texture and restore lost facial volume. Bonus: Because your own platelets are used, there’s no risk or allergy or rejection of the treatment.

First, the therapist took a few photos, under direct light (gasp) so that she had some “before” pics to compare later. Then a skin-numbing cream was slathered over the areas that were going to be injected, numbing the top layers of my skin.

Next step: Your own blood is drawn — about four vials — and placed in a centrifuge, which separates the platelet-rich plasma (the clear fluid) from the haemoglobin (the red stuff). The plasma is then injected under the skin. Yup.

READ MORE: Brace Yourself For The Most Insane Blackhead Removal Video Yet

I was prepared for a few injections, thinking it would be roughly one or two injections per area of the face and neck. What I was not prepared for was the amount of times the needle went in. I lost count after about 20… And that was just in the forehead. On one side.

While the top layer of skin is numbed pretty well by the cream, each injection can be felt going under the dermis into the deeper layers. Some areas are naturally more sensitive than others — like the sides of the nose, or around the eyes — and, I won’t lie, I did feel a fair amount of pain.

I then had plasma injected into my neck and décolletage, plus the backs of my hands. I found that the worst needle pain was in my face and hands.

Check out the video here:

Most people will have mild to moderate swelling after the treatment. There were raised bumps all over the injected areas. My face looked as thought I’d been stung by hundreds of bees, or had a terrible allergic reaction to something!

The next morning most of the swelling had gone, though, and I had two or three tiny bruises on my cheek and neck.

My décolletage still had several bumps though, and I looked as though I’d been bitten by mozzies. Luckily, those disappeared after a couple of days.

These pics were taken immediately after the procedure: 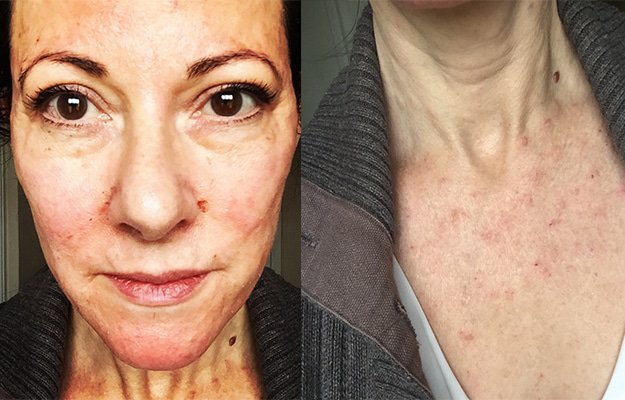 Unfortunately, I didn’t see any signs of improvement in my face, although in my post-treatment follow-up consultations a few weeks later, the therapist took more photos and and said she saw a definite overall improvement in skin texture. I’m still not so sure about that. I have an intimate relationship with each line on my face, and as far as I can tell, they’re all still there!

Because collagen takes up to three months to occur, the final results can differ from person to person. Much depends on other factors, such as stress, diet and the Big Evil: smoking! (If you smoke, you are not producing fantastic collagen to start with, so your skin won’t bounce back as it should.)

Would I do it again?

I say no now, but ask me again in 10 years and I might reconsider!

The therapy is supposed to be fantastic for people suffering hair thinning and loss. A wonderful fix for women who wear tight braids often, which can result in permanent hair loss.

For more info on the procedure, email info@genprac.co.za.

Want more? This is how Kim Kardashian West got her stretch marks removed.