Teething Toys — Should You Worry About Mould Growing Inside?

All parents will know the über-popular ‘Sophie The Giraffe‘ toy. For those who don’t, it’s a popular (and adorable) teething aid that’s 100 percent rubber and free of nasty chemicals like phthalates and BPAs (often found in plastic products), which makes it totally safe for toddlers… until now.

Last week, Sophie made the headlines when several upset parents reported that they found mould growing inside of the toy.

The reports began after paediatric dentist Dana Chianese told Good Housekeeping that she noticed an ‘off’ smell coming out of the hole in her son’s Sophie the Giraffe. “I decided to cut into Sophie out of curiosity and discovered a science experiment living inside,” she said. “Smelly, ugly mould living in my infant’s favourite chew toy!” 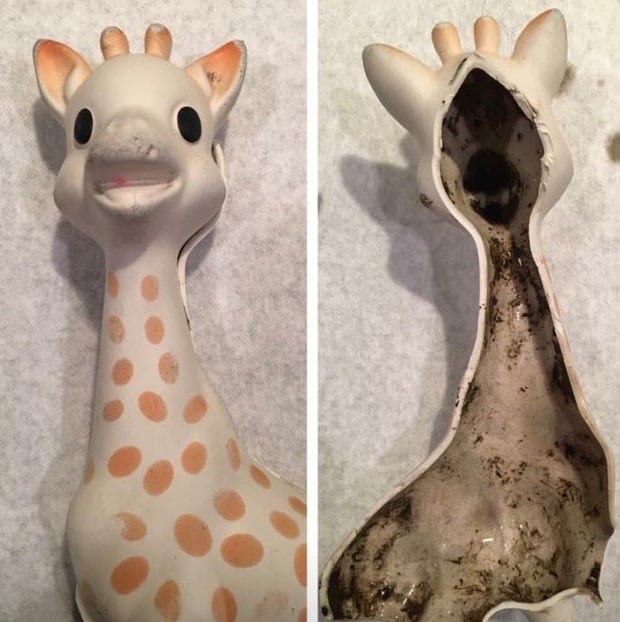 Chianese says she always cleaned Sophie according to instructions. The instructions state that parents should use hot, soapy water and a damp sponge to clean the teether, but should never submerge it in water.

After Chianese’s post went viral, similar accounts and photos started cropping up, with many parents questioning whether they bought an authentic Sophie toy in the first place.

In theory, long-term exposure to mould can affect a babies health. Mould is typically inhaled and can impact a child’s respiratory system, causing a runny nose and a cough. It can also lead to vomiting and diarrhoea, or cause a rash.

But, if your child inhales or swallows mouldy material on a toy once or twice, they will most likely be perfectly OK.

READ MORE: 6 Things To Know If You’re Pregnant And Exercising

It’s important for parents to remember that children’s toys with tiny holes can trap moisture — and mould generally thrives in damp, dark environments. Parents should keep an eye on chew toys that have any suspicious spots lurking on the outside. And, if the toy doesn’t smell A-OK, it’s probably a good idea to toss it. Toys should be kept out of damp conditions as much as possible and be sterilised regularly according to the toy’s care instructions. It’s also a good idea to put an ‘expiration date’ on teething items that you feel could potentially harbour bacteria.

So, although the news about the mould in Sophie and other teething toys can seem scary, you don’t need to rush to the hospital in a flat panic.

Looking for more info on how to keep your baby healthy? Here are our top eight tips for keeping your baby happy and healthy.