Not all heroes wear capes ?.

Not all heroes wear capes — some dominate in sport. Here’s a look at 10 sporting moments where women have transformed the industry.

Think back to 2008. Beijing. In the Paralympics and Olympics, Natalie du Toit made history as the flag bearer for the South African Olympic and Paralympic teams. In fact, she won all five events she entered in the Paralympics. Natalie also won the Whang Youn Dai Achievement Award, which is presented at every Paralympic Games to the swimmer who best exemplifies the spirit of the Games and inspires and excites the world.

Caster was only 18 years old when she aced the 800m run, scooping a gold medal in the 2009 Berlin World Championships. The champion created a serious buzz as she set a record for the fastest time that year. Her amazing sporting moments haven’t stopped since then…

Serena Williams – a.k.a GOAT (greatest of all time) – played against her twin sister Venus and won the Australian Open while eight weeks pregnant in 2017.

Saray was the first black African woman to conquer Mount Everest – the highest point in the world. She previously made an attempt to summit in May 2017, but was forced to turn back due to an injury. She went up again two years later and did it!

To pursue good and noble deeds just cannot disguise the fact that its only in our strengths that we ought to focus, not waste the power of our intentions buried in self redemption from our weaknesses. Who really cares for our mediocrity except mental amputees. So, focus on your strengths in 2019 because at your very worst, you’d still look amazing. #Recycledquote #Gladiatormoves2019 #browngirlsclimb #sisterhoodofthemountain

The USA women’s team dominated at the 2019 FIFA World Cup. The team used their victory to draw attention to equal pay and civil rights.

The Proteas netball team played in their first World Cup in 24 years and made the country proud by winning a silver medal. 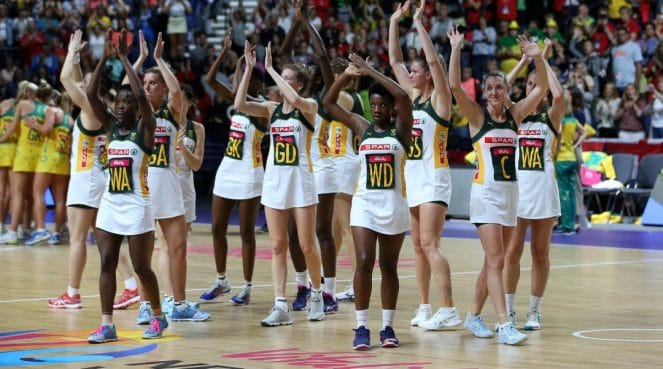 Banyana Banyana made their first World Cup appearance, playing Nigeria in the final of the Women’s Africa Cup of Nations. They also qualified for the 2019 World Cup in France.

Chloe is a professional Long Drive Golf competitor from Somerset West in Cape Town. Never heard of Long Drive? It’s all about who hits the golf ball the furthest. Chloe recently claimed the championship title for scoring a 347-yard (317m) drive. One of those epic sporting moments.

READ MORE: Why Are SA’s Sportswomen Not Getting The Recognition They Deserve?

Three-time Olympian canoeist Bridgitte Hartley was the flag bearer at the 2019 Africa Games in Rabat, Morocco. Bridgette and Donna Hutton dominated in their 200m canoe race, scooping their second gold medal as a team.

This years 12 th African Games – Jeux Africains Rabat 2019 was definitely a team affair, not only for me but all the Canoeing South Africa athletes! The most exciting thing was to see by how much all the african nations have improved! We lined up for the first time in African history with 5 female K4 boats & 8 men’s K4 boats! I have always wanted to be showered with Gold Confetti too! ? The races in which I competed In were K2 500m & 200m as well as K4 500m! ?

Twenty-year-old Naomi Osaka played against her idol Serena Williams and won her first Grand Slam title at the US Open this year.