Exactly How To “Eat By Colour” To Maximise Your Endurance

Brenna Coupland is not your average trail runner come personal trainer; in fact, she’s not your average anything. From cycling through Africa (just to get to know her new home), to cycling pretty much everywhere (she doesn’t own a car), there are many stories associated with this inspirational human. Currently, she’s racing and training for the toughest one-day event in the world: Ironman.

READ MORE: Here’s How To Really Train For A Triathlon Without Burning Out

Brenna is originally an Ultra marathon runner. “From 2015 to 2016 I was running ultra marathons so regularly that I suffered from pelvic stress fractures,” she says. This was diagnosed in 2017 and all running came to a holt. “I had to take up swimming and cycling to stay fit,” Brenna explains. A naturally competitive person, Brenna signed up for a triathlon, the Walker Bay Extreme in April 2017 – and was instantly hooked. “I immediately entered my first Ironman 70.3 event in Durban for the following June, but my big goal was to train for the Ironman Canada 2018,” she explains.

“I’ve been working with a coach for the past four months,” Brenna says. “Annchen Clarke of 3YO Training Camps in Stellenbosch sets up my programme and we work together to set my goals and then achieve them.” In a typical week, Brenna has one full day of recovery, then the rest is taken up by a mixture of all three disciplines (swim, bike, run) and strength training (usually two days).

READ MORE: Your Easy Triathlon Training Plan And Tips To Crush It In Just 12 Weeks

Currently rest is on the cards as Brenna has just completed Ironman Canada, coming in just short of a podium position in fourth place. “At the moment it’s a lot of Netflix and nutrition,” she jokes, “but I’m getting ready for the Ironman 70.3 World Championship in Port Elizabeth on 1 September.”

“Ironman Canada on 28 July 2018 was my first full-distance Ironman,” Brenna begins. But Durban 70.3 in June 2017 was her first Ironman event. “This is half the distance of a full Ironman,” she explains. Although all the triathlons are beginning to blur together, what really stands out in her memory is the feeling of crossing the famous red-carpet finish line for the first time. “The support and raw energy that greets you as your feet touch that red carpet for the first time…” Brenna reminisces, “I knew I hadn’t just finished a chapter in my story – I was opening up a whole new book!”

Even when you’re racing at such an intense level, it’s still a challenge. “Each race is always, and should always be, the hardest race I’ve ever done,” Brenna says. “My philosophy is that it never gets easier, I just get stronger.”

“I eat all the things,” Brenna jokes. Like most active people, Brenna loves a good meal. “I love food and I see nutrition as one of my secret weapons in endurance sport,” she adds.

The morning starts with a good ol’ cup of coffee with soy or 1% milk. Breakfast is a puffed rice cereal with yogurt and flax seeds, a little peanut butter and hemp powder. Lunch is either chicken or tuna, but always accompanied with tons of veggies. Dinner is a similar affair.

READ MORE: Exactly How To Find The Right Exercise For Your Goals

“On race day, I generally eat the same things,” Brenna says. “During race week, though, I like to eat by colour. At the beginning of the week, I get in as many greens and rainbow foods as I can. I want to get in as much fibre and vitamins as possible to keep me healthy and strong as I taper. By mid-week, my diet becomes more orange (pumpkins, carrots, butternut and sweet potatoes to increase my carb stores). One to two days before the race, my diet is mostly white (potatoes, rice, bananas, corn cakes and lots of water).” 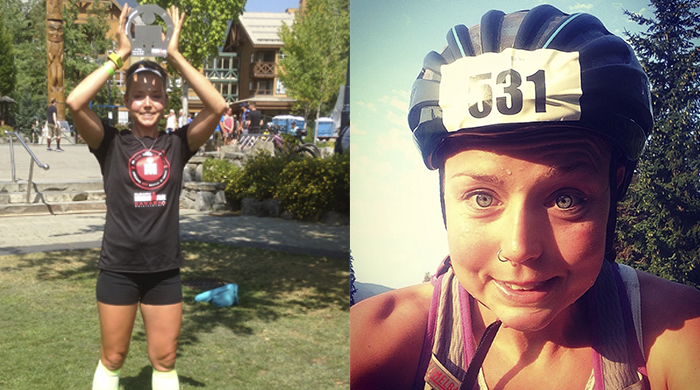 On the horizon are also some other crazy races, one being the Canadian Death Race, a 125km trail run. “I placed fourth in 2016, couldn’t return in 2017 because of my injury, and I had to skip this year as well to race Ironman. I’d like to try and win this race, but we’ll see,” Brenna adds.

READ MORE: This Woman Is About To Run A Gruelling 251km Race

But there’s only one big dream when it comes to Ironman. “I’m going to grab that tape one day,” Brenna concludes. As one of the most humble, down-to-earth people I know, she still has ambitious goals that she constantly works towards. “Within three years, I’d like to cross the finish line of a full-distance Ironman in first place – and grab that ribbon.”