I love putting my body to the test. When I missed the 24-hour mountain bike race at Oak Valley this year, I knew I had to find something to make up for it – and along came the Cableway Charity Challenge. I’d heard about the race before, but I’d never competed. And, as usual, I left everything to the last minute. Here’s what went down…

To take part in the Cableway Charity Challenge, you need to commit to a number of laps and pledge to raise R2 500. I decided to go with four laps because I wasn’t sure what to expect (FYI: there are people who do double that). Then there was just the matter of convincing family and friends to part with some cash dollar in the name of charity. And I’d left myself two weeks in which to raise this amount.

READ MORE: This Is Why Your Knees Always Hurt When You’re Running Downhill

The challenge is in its 10th year and this year the charities were CoolPlay, Paedspal and Centre for Play and Learning. Ten percent of proceeds go to another organisation close to my heart: Wilderness Search and Rescue. With a little bit of nagging, the sponsors came rolling in and suddenly I was officially entered for the event. No backing out now!

The Day Of The Cableway Charity Challenge

The day arrived. The weather was perfect and a beautiful sunrise greeted me as I arrived at the start line. Not sure of refreshment stations, I showed up with my hydration pack filled with Tailwind Endurance Fuel and as many bars and bananas as I could squeeze in. I needn’t have worried – the organisers made sure we had every kind of sustenance we needed.

READ MORE: These Speed And Power Drills Will Improve Your Running

The first lap begins at the Cableway Station and follows the Tafelberg road all the way to the beginning of the Platteklip climb. All 200 runners lined up, filled with excitement and nerves. I started my STRAVA app and followed the bunch. I’d forgotten that it’s actually a fair distance before the Platteklip climb. But, excited, I pushed myself to get close to the front. I’m way too competitive for my own good. Everything is a race – even doing the dishes.

Platteklip – this beautiful beast of a climb really does go straight up. The Cableway Charity Challenge website says it’s 800 double-sized steps going up. I didn’t bother to count. At first I tried a bit of jogging, but eventually, it slowed to a steady, slow climb (I’ll blame the people in front of me).

When I finally reached the top, the view was worth the climb. Clouds covered the entire city bowl, but it was sunny above them. I ran across to the Cableway Station where the cable cars take the runners down to the base to begin the climb all over again. Lap one complete. 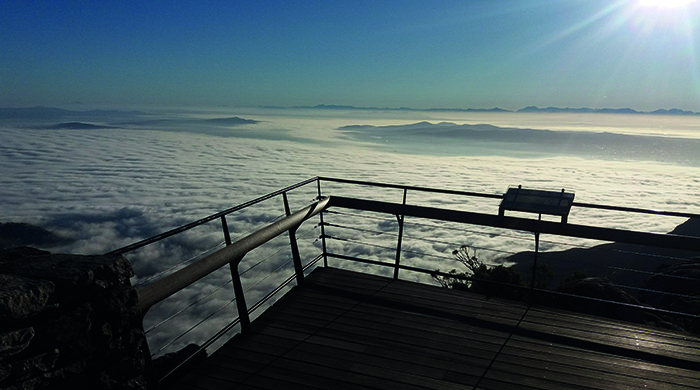 The second lap took a slightly different route. After passing through the designated athletes’ lounge and getting a lap ticked off on my number board, we proceeded back out to the mountain. Instead of the Tafelberg stretch, it’s straight up to the contour path that joins up with Platteklip.

The second lap was the hardest for me. Knowing I had so many more laps to do and already feeling tired, I wondered if it would be possible. But this is where the other competitors helped me out. I met such fun, interesting people on that climb – there really is something unifying about group suffering.

READ MORE: What Burns More Kilojoules: Running Inside Or Outside?

At the end of lap two, I decided to do five laps instead of the four I’d committed to. Why not give my sponsors one extra lap for their kind donations? My legs put up a bit of a fight, but in the end, we all agreed. Five laps.

After a few bites of a bar and water (lots of water!) I ventured out again. By this stage, I knew the routine and was in the zone. I always find that once you do something enough times, your body accepts its fate and just keeps powering on. What are a few burning muscles and the odd ache and pain?

READ MORE: 6 Running Pains —And How To Treat Them So They Never Come Back

My brain distracted itself from the process by digging up the strangest memories. I began thinking about a project I did on Table Mountain in primary school – I’d called it Mount Table. If you can have a Mount Everest, surely there can be a Mount Table?

Lap three done. Legs burning and dodging tourists, I made my way back to the Cableway Station to start again.

By the time I began lap four, it was around 12 pm and the mountain was swarming with tourists. I knew that some of my buddies were waiting for me at the top this time, which motivated me more than anything to keep climbing. That… and the thought that after this I’d be doing my last lap.

READ MORE: 5 Ways To Trick Your Body Into Running

It was rejuvenating to meet up with my friends and take a few pics. I spent a while chatting, then managed to get them into the much shorter athlete’s queue for the cable cars – they were my support crew, weren’t they?

At the bottom, one of the guys I’d been running with had succumbed to the temptation of free beer. I almost did too, but I’d committed to five laps, and I never quit before I’m finished.

The Fifth And Final Lap

This lap was easy. I took my time because I knew that every section was for the last time – the climb to the contour, the contour path to Platteklip, then Platteklip to the top. I even ran the final stretch across the top to the Cableway Station.

It was three o’clock and I was tempted to try a few more laps – I mean, it only ended at 6pm. But I had errands to run and opted out.

I got down to the base and said a sad goodbye to my new trail buddies and the incredible organisers. But it’s only goodbye until next year. This is definitely a race I’ll be doing again.

If you want to add the Cableway Charity Challenge to next year’s goals, check out their website.