"I'd walk with my friends and struggle to keep up... Little did I know I'd be running Comrades a year and a bit later!"

We all have that one friend who never stops moving. For me, that’s Carla Du Toit. This Duracell Bunny will be up at 4am for gym, or keen to run after 8pm – and plenty in between. Does she sleep? Who knows…

She’s been like this since I met her, so it came as a shock when she told me she’d actually been a bit on the chubby side during high school, and that she hasn’t always worked out. What? This girl who’s run Comrades three times? Naturally, I had to get her to share her inspirational story.

Carla grew up doing little exercise – some netball here and there, but it wasn’t part of her routine… yet. When she moved to Stellenbosch for varsity, she made new friends who worked out daily. Also, Carla didn’t own a car at that stage, so she needed to do a lot of walking to get around.

READ MORE: The 4 Best Ways To Ease Into Exercise If You’re Plus-Size Or A Beginner

One of the first friends Carla made at uni was addicted to daily workouts and running. Keen for a challenge, Carla signed up at the local gym. A routine-lover, she went all-in. “I would walk to the gym every day and do a workout,” Carla says. Not really knowing how all the machines worked, she experienced the same struggle we all go through as beginners. “My first spinning class almost killed me!” she adds. Ironically, she’s a qualified spinning instructor now.

As winter approached and the days got shorter, Carla had to run home to get back before dark. “The running became part of my workout and I really enjoyed it,” she adds. Her fitness buddy had a 7km run planned and invited Carla to join. This suggestion was met with a little nervous excitement. “I couldn’t imagine running 7km!” But she did it – and it felt amazing.

“I moved back to KZN half-way through second year,” Carla says, “When I got to the airport my Dad didn’t recognise me!” Carla knew she’d lost some weight, but she hadn’t realised how much. Her friends back home were blown away by how incredible she was looking.

READ MORE: Even One Minute Of Running A Day Can Be Good For You

“There’s no gym near my house in KZN,” Carla adds,”but I wanted to keep up what I’d started, so I signed up for a 10km race that was coming up.” While she ran the 10km, she got chatting to a running group. They invited her to join them for their morning runs… at 4:30am. And she did. 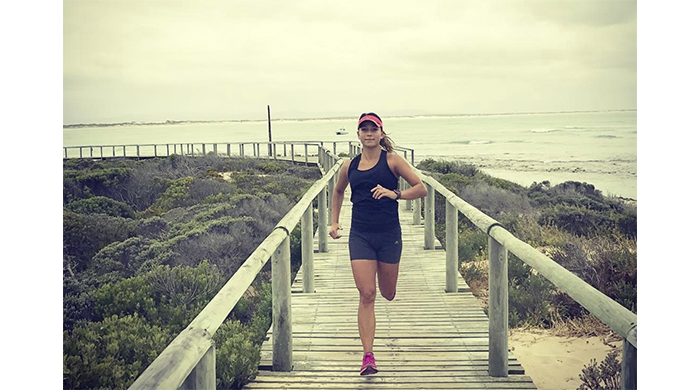 “I remember the exact place I committed to Comrades,” Carla says. “I told Paul from the running group (he’s completed Comrades many times) that I was in. He wanted to know if I meant what I said,” Carla says. She really did. She was all-in for the training and that 110% commitment.

READ MORE: When Should You Run An Ultra Marathon?

When D-day (or C-day) finally arrived, Carla had put in the hours, blood, sweat and beers. She ran with a couple of the running group members and all was well until she fell on the 80km mark. “I was so exhausted, I just lay there and cried,” she says. In such a heavily attended race, lying on the ground is not ideal – or safe. “Paul pulled me up and shouted at me,” Carla remembers. “He told me to keep f#cking running and that I was going to finish.” Some tough love, but it was the reason she ran those last 10km and made it across the line.

“I cannot put the feeling [of finishing] into words!” She exclaims. “It is literally where the term ‘tears of joy’ originated.” Kinda makes you want to run it too, doesn’t it?

“Anyone Can Do It…

… If you truly commit!” This is how Carla feels about most things in life. If you want it badly enough and put in the effort, the goal can be achieved. Carla has completed three Comrades and is chasing her fourth. Of her many inspiring running achievements, she’s also proud of her sub-5 Two Oceans Marathon. But she’s only getting started – there’s so much more to squeeze into this one life.

Feeling inspired? Here are 10 things you should know before running your first marathon.