What happens in the box...

It’s that special time of year, when the Women’s Health team dedicate three months to upping their fitness in the WH Staff Fitness Challenge. We’ve done so many different things in the past few years, from boxing and swimming to S.W.E.A.T. 1000 and yoga, so this year, fitness editor Wanita Nicol challenged us to do something that scares us.

First of all, most new exercise scares me. I never feel like I’m going to be good enough and am always worried that I’m going to make a fool of myself. And if you had to wrap all of that fear up into one exercise regime? I got to CrossFit. The competition, the weights, the bright fluorescent lighting – what’s not scary??

So it was with a wildly beating heart that I entered CrossFit District Six in Cape Town at the beginning of the challenge. Luckily, it wasn’t at all how I imagined it. Here’s what I learnt:

1/ Each Class Runs With The Same Basic Programme

To be quite honest, I didn’t actually know exactly what happens in a CrossFit class, until I did one. All I knew was that at some point I would be expected to somehow manoeuvre a heavy barbell from the floor to over my head without concussing myself (otherwise known as a clean and jerk). 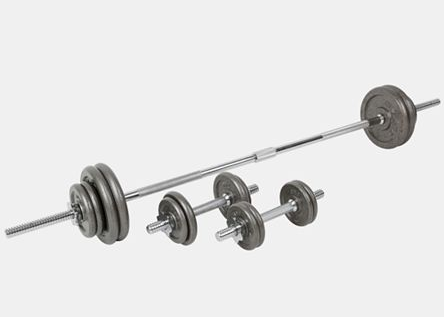 What actually happens is that each class is divided into sections: a warm-up, two or three exercises, conditioning and a cool-down.

The warm-ups are comprehensive and focus on making sure all the muscles you are going to use in the class are fully limber. There are two or three exercises next, then you get to the conditioning part of the class (or workout of the day), which incorporates some of the exercises or moves you’ve done just before. Conditioning is where some competition comes in so you need to push as hard as you can. Finally, you’re given a suggested cool-down to take care of all those hard-working muscles.

READ MORE: 9 Best Calf Exercises To Give You Toned Legs Like No Other

We’v all seen the Instagram posts of buff fitsters deadlifting barbells that are literally bending under the pressure of the weights they’ve stacked onto them. Intimidating, right? Well, a good thing to remember is that everyone has to start somewhere. Those fit folk have not just started and have most likely been working on their strength and form for years.

All the exercises can be modified to suit your fitness level and the coaches are there to show new people exactly how to do each move, as well as give advice on what weights to use, and will correct you when you go wrong (this happens to me A. Lot.).

I also thought it would be intimidating to be in a class with such advanced CrossFitters, but it’s actually more inspiring and makes me want to work harder so that I can lift heavier and be as strong as they are.

As mentioned, there is some competition involved in CrossFit and it happens during the conditioning part of the class. It was the part I was most dreading about the classes, but luckily it’s not as intense as I thought it would be. You just have to keep track of your reps during the conditioning part of the class and the instructor will write it on the board at the end. No one’s running around trying to find out who did the best, it’s more of a way to know how you did in relation to everyone else (I know, it sounds like a competition, but it’s not that hectic) and how you’ve improved from previous classes.

4/ You Have To Be Good At Counting Reps

What I absolutely failed at in my first, second and third classes was counting my reps. And, as mentioned above, counting reps is important during the conditioning part of the class so you know how well you did. Sure, it sounds easy enough to count as you go, but I found that I was so focused on trying to complete a rep with proper form, my brain literally couldn’t contend with counting at the same time. It’s getting easier though, it’s just taking some getting used to.

5/ I’ve been Using Too Light Weights

So, I’ve been quite proud of myself for moving up in the weights section since I first started exercising a few years ago. I do lots of biceps curls, presses, triceps kickbacks etc and, in my mind, have progressed really well. Cue: heading to get some dumbbells at CrossFit and finding that the lightest weights are the weights I’d been using a few months before. What CrossFit has really taught me is that I can lift a lot heavier than I thought and should definitely be pushing harder – which isn’t hard to do at CrossFit!

Want more? Learn about the 10 most common terms you’ll hear at CrossFit.