10 Destination Races You Can Turn Into Awesome Vacations

Run to travel, or travel to run? How about you do both… at the same time.

Destination races are literally the perfect way to get in a workout AND still do some epic exploring. So, with that in mind, I’ve rounded up the world’s best race-cations… so you can add them to your calendar now (and start saving).

Why run it: It’s in our own backyard and a great way to take in the natural wonders that Cape Town has to offer. Out-of-towners can book a special UTCT travel package with Runcation, which includes extras like route recces, a tour of the Cape Peninsular and a Robben Island excursion.

Route Info: UTCT is the final race on the Ultra-Trail World Tour calendar. The races traverse sections of Table Mountain, Lion’s Head, Signal Hill, Orangekloof, Llandudno, Hout Bay, the Constantia Winelands, upper slopes of Kirstenbosch Nature Reserve and Devil’s Peak, which form part of the iconic natural world heritage site and one of the new Natural Seven Wonders of the World. The 21km race (introduced in 2018) is perfect for those who are just ‘dipping their toes’ into longer trail races. The course heads out along the lower jeep and single tracks of Devils Peak (hello, views for days!) and then swiftly turns into a climb at Newlands Ravine. Those running the 35km will head into the belly of the beast — Table Mountain — with a steep, vertical climb at Platteklip Gorge. On the home stretch, you will be rewarded with incredible views of the City, the Atlantic Ocean, Table Mountain and Lions Head. The 65km and 100km races are tough with 3100m and 4300m worth of climbing. There will be ice-cold beers waiting for you at the finish line! 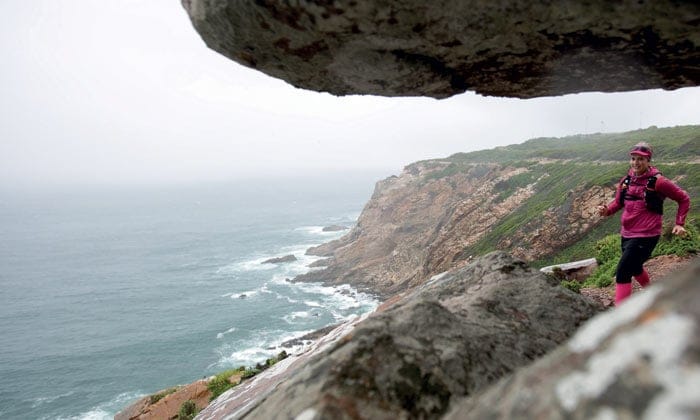 Why Run It: This is perfect for those wanting to get into stage racing, without being intimidated. It’s the ideal opportunity for a weekend away, running in areas you wouldn’t normally be allowed access.

The Nitty Gritty: The Oystercatcher takes place from 25-27 September 2020. The weather should be mild but you’ll probably need some warm and wet-weather gear. On day one you run from the reserve to Gourits River mouth on jeep track and coastal hiking paths. Day two takes you to Boggoms Bay on the coastal trail. The last day winds from Dana Bay to the finish via the St Blaize hiking trail, where dolphins are regularly sighted. Head to TriSport for more info.

Why run it: It’s the ultimate way to have an active island holiday and see Mauritius in all its natural splendour. An ideal honeymoon for fit couples; a treat for anyone who likes a bit of luxury with their running.

Route Info: Designed by one of the leading French trail running specialists, the UTRB takes runners through the most breathtaking regions of the island – from mountains and forests to cliff edges and pristine beaches. The 10km race, Trail Du Souffleur, is relatively flat and follows the coast along unspoilt beaches, past blue lagoons and rugged cliffs. You’ll get a hero’s welcome at the finish at the five-star Shandrani Resort & Spa, where you can opt to stay. The Trail De La Perruche – the 47km course – connects the lush central mountainous region to the wild beaches in the South, passing tea plantations and sugar-cane fields. The big daddy – the Seven Colors Trail – is named after the seven variations of red, ochre and purple dunes you pass along the 120km route. While conquering the island’s wildest peaks, you’ll climb 9 000m!

Why Run It: If you’ve ever wanted to see one of the New 7 Wonders of the World in its original state, this is the best way. The views and photo ops are stop-in-your tracks breathtaking.

Route Info: The race covers an authentic, less touristy section of The Great Wall and surrounding villages, just a few hours’ drive from Beijing. Both the marathon and half marathon start at Yin and Yang square before venturing out to the Changcheng Highway where you run on road. You’ll then be introduced to the seemingly endless steps of this historic landmark, before heading south to the villages. At the 13km mark, the half marathon route splits from the marathon. While 21km runners head to the finish, marathon runners face the Great Wall a second time! All runners who don’t reach the steps leading to the wall (34km) within six hours aren’t allowed to continue. If you’re a marathoner you’ll tackle a few more ascents before the final downhill to the finish, where you can revel in the fact you conquered 5 164 ancient steps!

The Nitty Gritty: The next race takes place on 16 May 2020. The weather is hot and humid with temperatures reaching 30°C, so make sure you wear light clothing, sunblock and take a cap! There are water stations every four kilometres. Choose between a six-day package (about R20 259) or seven-day package (about R21 647), which both include daily tours of Beijing, accommodation and food. Check out Great-wall-marathon.com for more info.

Why Run It: The races start at the foothills of the Alps and finish in the beautiful medieval city of Città Alta in Bergamo. Think mountain views for days, Alpine air, ancient cobbled streets… plus all the pasta you could ever dream of!

Route Info: These races are high up in the north of Italy and trust me when I say that the terrain is pretty damn “hilly” (I’m from Bergamo, so I would know). The 20km race, Bergamo Urban Trail, takes you on a route around the hills of Città Alta and you’ll get a magnificent view of the modern city bellow. The Marathon Trail Orobie — the 42km course — takes you all the way from the town of San Pellegrino, winding its way through mountains, streams and over hills until you reach Città Alta. Those running the 70km Gran Trail Orobie course will head out from the Val Brembana, making their way up through mountain passes (there’s a total of 4 000m of ascent) and down into the valleys below. The big one — Orobie Ultra-Trail — will have you climbing a total of 9 500m and takes an average of 38 hours to complete! The 140km race only takes place every two years.

The Nitty Gritty: The next 140km Orobie Ultra-Trail is scheduled for July 2020. The weather is usually hot this time of year and temperatures often reach over 30°C. Don’t be fooled by the heat though — thunderstorms are pretty common too, so make sure you also pack in a waterproof jacket. For more info head to orobieultratrail.it. 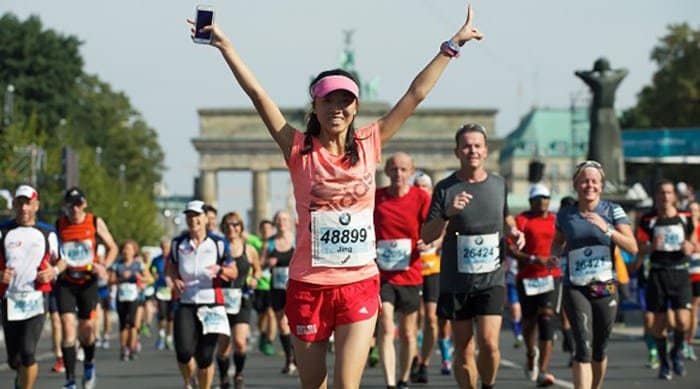 Why Run It: This race is great for first-timers and the course is known as one of the fastest marathons in the world, so aim for a PB! Also, if you’re into Rollerblading, you can compete with 8000 others on the same course a week before the run.

Route Info: The Berlin Marathon, established in 1974, is one of the World Marathon Majors — along with Tokyo, Boston, Chicago, London and New York. The most marathon records for men and women have been set at this event, as it’s a very flat, low-altitude course. On 30 September 1990, after the collapse of the Berlin Wall, athletes were able to run through the Brandenburg Gate (a symbolic selfie spot, above) for the first time and celebrated running through both halves of a newly unified city. Landmarks include Potsdamer Platz, Reichstag and the Berlin Cathedral. An emotional race for many — expect tears.

The Nitty Gritty: The race takes place on 27 September 2020. The weather is usually very mild, being autumn. Plus it’s worth staying on for Oktoberfest! Visit Bmw-berlin-marathon.com for more info on the race.

Why Run It: If you’re a fan of Indiana Jones and ancient history, this is the best tour you’ll get!

Route Info: Starting in the ancient city of Petra in Jordan, this Arabian adventure takes runners through the arid desert and lunar-like mountain landscapes. It’s pretty hilly — the marathon ascends 1 200m and descends 1 100m. Soon after the start, you’ll be navigating tombs, caves and monasteries carved into the mountainside. After passing the Petra Archaeological Park, it’s time to hit the desert. Half marathoners take a direct route through the riverbed of Siq Al Bard, while marathoners loop around the hilltop before heading back to tar. The bonus: while 21km runners go straight through the village, the 42km passes mystic rock formations that few tourists get to see. It doesn’t get easier though — there’s another five-kay climb — but the views make it worthwhile.

The Nitty Gritty: The next race is on 5 September 2020. It’s pretty damn hot and the route offers little shade, so lightweight, light-coloured clothing, high- SPF sunscreen and a cap are essential. There are also no clothing restrictions — women are allowed to wear shorts and tank tops. You can purchase a five-day, five-star tour package, which includes your race entry, for around R12 419. You can book your entry on Petra-desert-marathon.com

Why Run It: If you’re looking to go a bit off the beaten track, then this one is for you.

Route Info: You’ll run through the mystical Torres del Paine National Park in Chile, which is home to mammoth electric-blue glaciers and the jagged, snowcapped granite peaks of the Paine mountain range. While the marathon is run on roads, it’s not exactly a road race — the “roads” are rough gravel jeep tracks and some sections have stony terrain. It’s not hilly by most trail runners’ standards, but definitely challenging for those who spend most of their time on tarmac. The half marathon starts at Pudeto and the full at Porteria Serrano, but they both finish at Porteria (entrance) Laguna Amarga.

The Nitty Gritty: Race day is 5 September 2020. Because it’s not peak season, you won’t have to fight it out with tons of tourists; however, the weather tends to be unpredictable and the wind can roar, so be prepared with the right kit and mental agility for these conditions. The cost for both the 21km and the 42km is between R3 094 and R3 913. Check out Patagonianinternationalmarathon.com.

Distance: 383km over five days (this isn’t a stage race).

Why Run It: Perfect for adrenaline junkies and extreme ultra runners. You’ll run through some of Utah’s most stunning… and seriously challenging terrain.

Route Info: The race is the brainchild of ultra-runner and host of Humans of Ultrarunning, Candice Burt. The Moab 240 is a solo, non-stop race which takes on average about five days to complete and is basically a once-in-a-lifetime epic adventure. You’ll traverse canyons, two mountain ranges, and stunning red rock mesas, surrounded by Canyonlands and Arches National Parks.

The Nitty Gritty: As this is a non-stop multi-day event, it’s VERY physically and mentally demanding (runners often experience hallucinations and sleep deprivation on the course). You have to keep in mind that you are running through a desert and will be exposed to the elements — like extreme heat in the canyons and cold, windy (even snowy!) conditions in the mountains. FYI — This race is definitely not for newbies or for the faint-hearted. The Moab 240 takes place on 9-13 October 2020 and the cost for entry (this excludes flights etc) is roughly R17 959. Head to Destinationtrailrun.com for details and other adventure races.

Why Run It: It’s Disney World… do you really need another reason?

Route Info: You can literally run this race like a real-life Jedi (dress-up is encouraged). The course — which runs right through three of the Disney theme parks — promises loads of ‘intergalactic surprises’ and you’ll definitely run into a few of your favourite characters along the way. The galaxies most coveted medal awaits you at the finish line.

The Nitty Gritty: Race festivities take place over the weekend of 16-19 April 2020. There is so much to do and see here, so it’s worth taking a proper break and extending your stay (an amazing holiday for the whole family, too). You can book race and holiday packages via rundisney.com.