Because when celebs share, we care enough to let you in on the secret…

Competitive horseback rider, volleyball player and foodie — perhaps not the first three terms that come to mind when referencing 2016’s Model Of The Year, Gigi Hadid, but this Reebok global ambassador is fitness personified. “My mom wanted me to be a volleyball player and ride horses so that I had this confidence in myself that had nothing to do with what I looked like. So that I knew I was a hard worker,” explains Gigi. And this confidence is exactly what she falls back on when the going gets tough in the body-obsessed world of modelling.

Boxing. “For me, mentally, boxing gives me the community aspect and I like getting better and getting stronger. Working out isn’t just about how you look, it’s about what makes you proud on the day and what you’ve gotten better at. It has a huge impact on your mental stability and your ability to find self worth in other things,” explains Gigi.

The low-down on her training 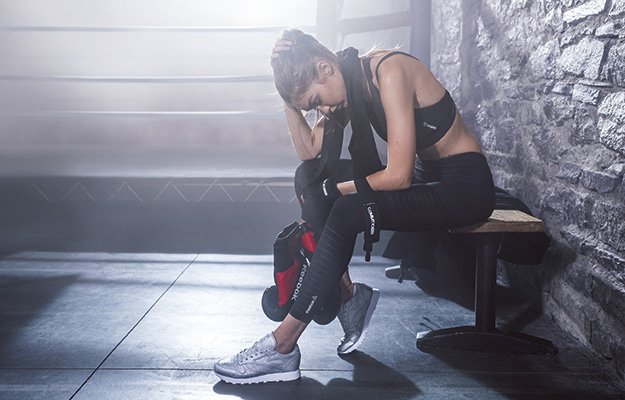 She’s been training with Rob Piela — founder and creator of Gotham Gym in New York City – for three and-a-half years and her abs-of-steel, lithe, toned arms and serious self-defence skills are testament to the programme’s success. But for a globetrotter of this level, staying healthy and fit is not always easy.

When Gigi is in NYC, she trains for an hour every day with Rob and his team. “You have to find people who motivate you,” says Gigi affectionately of her Gotham “big brothers”. “I want to go to the gym because I want to be a better boxer, to improve on what I’m doing – to be proud of my athletic ability. That’s what motivates me.”

Depending on what Gigi needs at the time, Rob tailors the focus of the training sessions, but in between all the boxing fundamentals are bursts of callisthenic and functional moves. “At the moment she isn’t looking to lose any weight, so we don’t do too much cardio. But it all kind of goes according to how she’s looking and feeling. A typical strength-training programme — I imagine — would bore her. She’s very athletic and likes to be challenged.” And Gigi affirms this: “I think it’s really important to change your diet and workout because when you get static, especially bodywise, muscle memory at the end of the day turns into your body not changing.”

The irony behind those abs…

When asked if Gigi struggles with any part of the training, Rob says “She doesn’t baulk at much, but if I had to pick something, abs are probably the toughest for her.”

Rob’s top workout move? Donkey kicks because they work your legs, butt, core and lower back! And when it comes to applying your boxing know-how in the real world of self-defence, Rob recommends using your elbows. “If you punch someone, you’re likely to break your hand, but your elbows are pretty safe and you can really hurt someone.”

And, not that it’s something we haven’t heard before (although we can always do with a reminder), Rob is an advocate for consistency. “Don’t push yourself too far or too hard. Stay in the groove. The people who are always in the best shape are the ones who are consistent with their training. Being consistent gives you good awareness of your body and the more aware you are, the less likely you are to get injured. And with boxing or any type of exercise, if you’re not doing it with good form, you can be at risk of getting injured. Unlike people who go really hard, killing themselves, and then you don’t see them for three weeks. Understanding your body is the most important.” And don’t forget to stretch!

If you’re a jet-setter like Gigi or struggle to get to a gym, here are Rob’s top exercise anywhere moves for your abs, arms and butt…

“They’re the best bang for your buck,” says Rob. Studies have shown that the bicycle crunch is a lot more effective than the basic crunch because it targets your lower abs as well as your obliques. 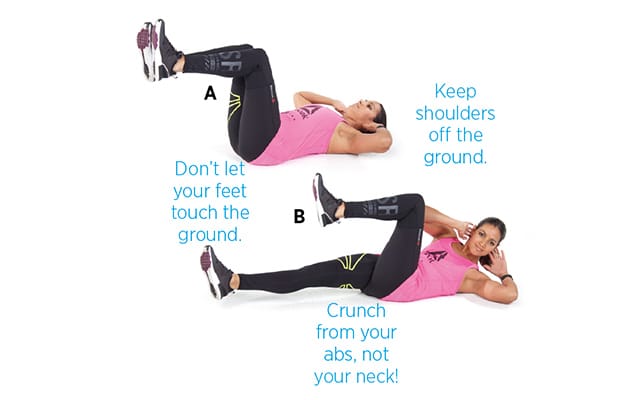 Lying on your back, bring your knees up to form a 90-degree angle and keep your hands at your temples, elbows out (A). Crunch up and twist to touch your right elbow to your left knee, while extending your right leg straight in front of you (B). Reverse the movement and repeat on the other side. Continue alternating.

“Resistance bands are so easy to travel with,” says Rob. 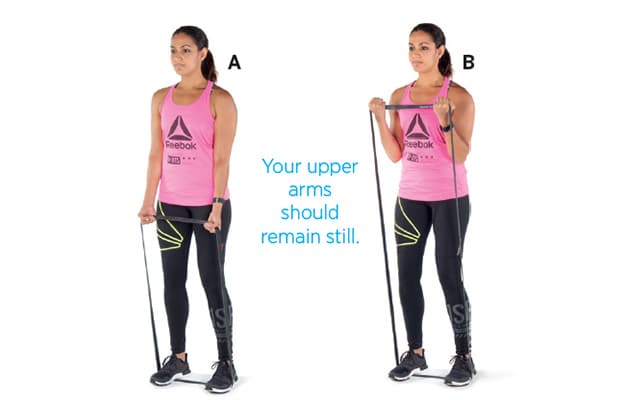 Stand up straight with your feet hip-width apart, knees slightly bent. Place the band securely under your feet and hold it down by your sides, palms facing forward (A). Brace your tummy muscles and curl your arms up towards your shoulders without swinging them (B). Make sure you keep your elbows tucked in at your sides. Return to start in a slow and controlled manner.

This move tones all three of your butt muscles: gluteus maximus, rectus abdominis, latissimus dorsi. “They’re very good for your glutes and they don’t build your quads too much, the way squats do,” says Rob. 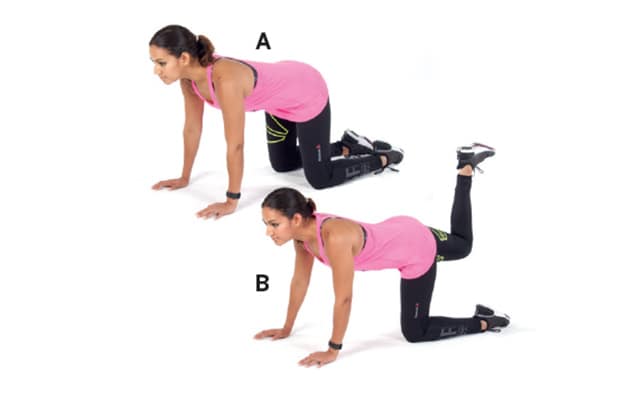 Get on all fours so that your hands are directly under your shoulders and your knees are in line with your hips (A). Bracing your tummy muscles and keeping your knee bent, lift your right leg up behind you until your thigh is in line with your body and your foot is parallel to the ceiling (B). Lower back to start and repeat with the other leg. Continue alternating.

But wait, here’s the best part…

Need an emergency shred?  We asked Gigi’s trainer Rob Piela how to slim down and tone up in just two weeks…

1. “See a nutritionist to work out how to reduce your kilojoule intake.”
2. “Up the number of hours that you exercise.” It’s all about input vs output.
3. “Do more cardio for the simple fact that you burn more kilojoules. I love running… But running is not for everyone. I think skipping is great too — it can slim your legs up a bit more. Rowing is also great. You can do whatever you like that brings your heart rate up to a certain level.”

what should you eat?

Rob’s advice on workout nutrition pre-workout: “Go for carbs, something like oats.”

Post-workout: “If someone is looking to build lean muscle, they must take in some sugar afterwards and some protein to help rebuild the muscle. A smoothie is pretty ideal because it’s an engineered balance of carbs, fat and protein. I don’t personally like smoothies because I like to actually eat, so I would have a quinoa salad with salmon, for example.”

Gigi Hadid also recently opened up about her brave battle with the little-known thyroid condition, Hashimoto’s Disease. So, what exactly is it – and what does being a sufferer mean for Gigi?