“I Am Unapologetically Myself — I Am Not Defined By My Weight”

A shocking personal account of how little models eat – and how to regain your power in the industry...

Mia Kang is the happiest she has ever been and looking as gorgeous as ever. Now a Muay Thai  force to be reckoned with, it’s crazy to think that not so long ago she never dreamed that she would be able to do a push-up, let alone have abs.

In an exclusive interview she told Women’s Health the rollercoaster ride her life has been and how Muay Thai ultimately saved her life.

READ MORE: These 3 Women Are Living Proof That You Can Be Fit And Overweight

Entering the modelling world with the sketchy self-esteem of a teenager can’t have been easy going. “I was really alone as a kid so I just stopped eating. I didn’t know what I was doing,” she adds. For the next 15 years, Mia was sucked into the whirlwind industry of modelling. 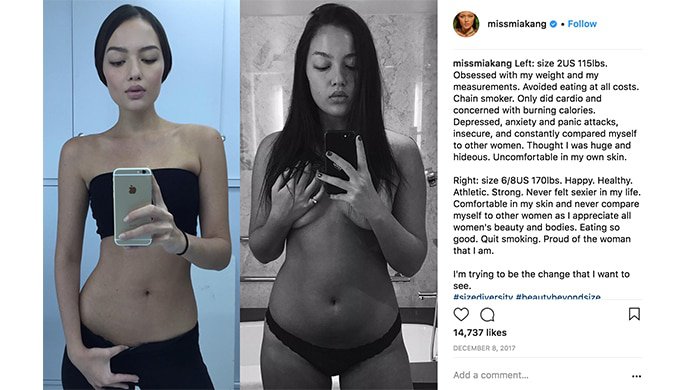 “Some Agencies Would Ask You To Starve…”

We’ve heard (and seen) that models hardly eat, but it’s even more shocking to hear a personal account of it. Mia admits that there were some agencies that wouldn’t pay you your weekly allowance if they were unhappy with your measurements. This way, you couldn’t afford to eat.

“I’ve also seen girls take mysterious diet pills, take narcotics, take sleeping pills for days on end… all just to lose weight,” she adds. Not quite the glamour life we’re presented with. “I’ve been asked to do impossible things, like only lose weight on my thighs or my upper arms.”

READ MORE: “I Suffered From An Eating Disorder You’ve Never Heard Of Before”

Mia got by on a diet consisting mainly of black coffee and Marlboro Light cigarettes. So it’s easy to understand how she became depressed and suffered from constant anxiety. “I was so insecure and unhappy. I was unable to be present and enjoy life because it consumed me,” she says.

Ironically, the girl that everyone wanted to be wouldn’t have wished her past on anyone. Mia had reached a point where weight and food (or lack of it), controlled her whole existence. “My body had had enough, my mind had had enough.” Something had to give. 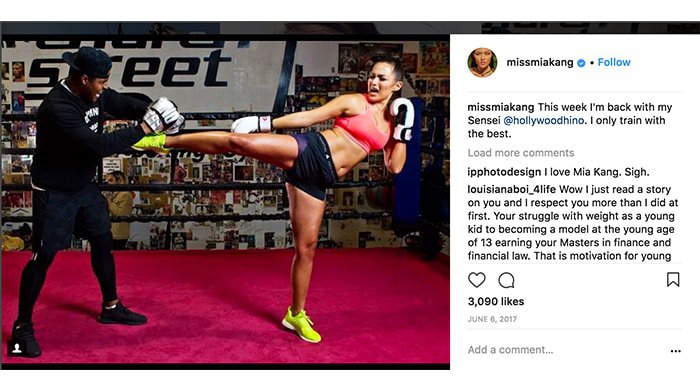 Mia has no idea why she walked into the Muay Thai gym on the first day. Maybe she needed to hit something to relieve some of the stress and pressure she was feeling. “Maybe I just wanted my butt kicked,” Mia adds jokingly.

READ MORE: Here’s Why This Body-Positive Model Shared Her Own Retouched Images

From that day forward began a gradual process of letting go of the old insecurities and discovering the incredible power her body possessed. “I wanted to eat more to have more strength. I wanted to have bigger hips and thighs for more power,” she says.

After spending so many years trying to be as skinny as possible, this newfound strength was a relief. “I have been missing out my whole life. We are so strong – it’s a shame to never be able to see what your body is capable of,” she concludes.