7 Weird Secrets From A Pro Ballerina

Behind the scenes at New York City Ballet

We went backstage at New York City Ballet and got a glimpse into the life of a professional ballerina. Here are some of the surprising things we discovered. No. 6 was a real shocker!

Last week deputy ed Wanita Nicol was swanning around (see what we did there?) with New York City Ballet for the launch of Puma’s Swan Pack collection – a collaboration with NYCB that hits stores next week. And yes, the same kit that Kylie Jenner posted pics of herself wearing on Insta. Fun fact: the version of Swan Lake that NYCB is currently performing has all the dancers, aside from the Swan Queen, in black. Because, as choreographer George Balanchine pointed out, there are black swans too. Watch a sneak peak here.  After the show we headed backstage for a guided tour by NYCB ballerinas Mimi Staker and Olivia Boisson.

Here are some of the surprising things we learnt.

1/ A ballerina’s pointe shoes are custom made just for her.

If you ever took ballet at school, you’ll have memories of being dragged off to a musty shop where some stern once-was-a-dancer grabbed your feet in a vice grip and shoved them into shoe after ill-fitting shoe. None of that for the pros. A ballerina’s shoes are crafted to fit her feet exactly, accommodating all their unique peculiarities. 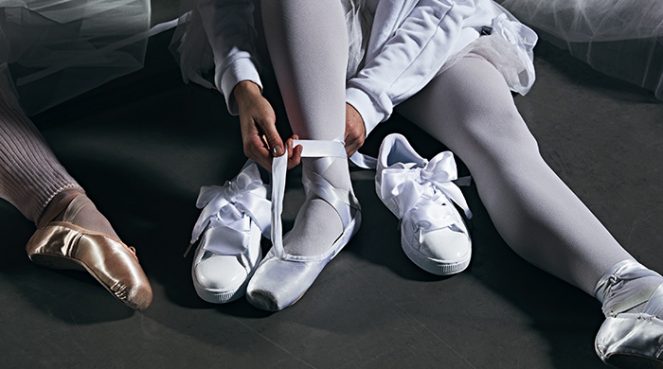 The crazy thing? Those beautiful bespoke shoes take such a beating during performance that most often they’re binned at the end. “Some ballets, where we’re not on pointe as much, we might keep a pair of shoes beyond one performance, but most nights they’re done,” says Mimi.

3/ Before a performance, ballerinas bang their shoes against a wall.

Pointe shoes look delicate, but on stage they can sound like an unwelcome visitor hammering at your front door. And no one wants that kind of noise disturbing their ballet experience, apparently. The solution? Hammering the shoes against a wall softens the blocks, making them quieter.

Ballerinas also bend and fold their pointe shoes, scuff the soles to make them less slippery and stomp on Rosin, a type of tree resin, to give the shoes more traction. Finally, they sew themselves into the shoes so they don’t slip off.

Ballerinas do their own hair and make-up. “We get a lesson when we first join the company and then we’re pretty much just left on our own from there,” says Olivia. Layers of cakey make-up prevent the ballerinas from sweating on stage, while dramatic eyes, lips and cheeks make their faces visible under the lights.

The pressure of being on pointe can cause short nails to become in-grown. Also important: calluses to help a ballerina’s feet withstand the demands placed on them. No pedis then. 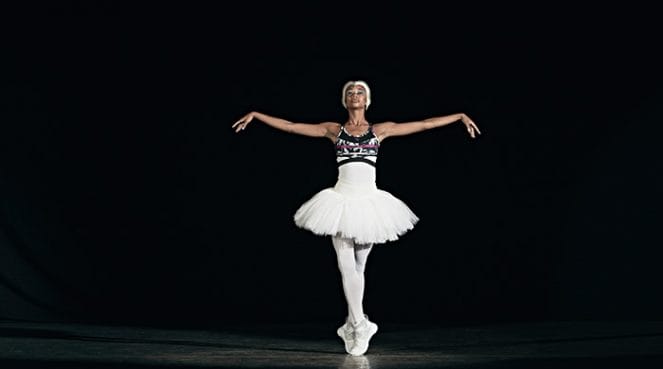 7/ Ballerinas eat carbs. Lots of them.

“It’s a myth that dancers don’t eat. We have to keep our bodies fuelled,” says Mimi. “You can’t go through a day of not eating. We wouldn’t be able to do what we do.” Mimi’s diet is almost disappointingly normal, including oats or egg on toast for brekkie. She’s not a fan of smoothies though. “We need something more substantial,” she says.

Looking for more on ballet and what it takes to be a dancer? Steal Misty Copeland‘s tips to success, plus a look at our favourite fit dancers.