“I Started Skipping A Few Minutes Every Day. This Is How It Transformed My Legs”

I have calf muscles for the first time in my life!

I’ve always had skinny calves. At school I lived on my bicycle. I’ve run, lifted weights and done calf raises on the stairs. I even gained 10 kilos of love-chub as a newly-wed. And through it all, my calves remained disappointingly stick-like.

These are the only boots that don’t gape over my skinny calves. They’ve been re-soled four times.

Then, a few months ago, my husband bought me a skipping rope, claiming that skipping is one of the best forms of exercise out there. (I mean, he’s right and I knew that, but I hated skipping and I didn’t want to do it.) Part of the gift was that he would teach me to skip. Yay. Fun times for everyone.

READ MORE: This 15-Minute Skipping Workout Will Transform Your Arms And Abs

So off we went to the garden, where I was put through skipping drills until I reached the point where I could skip in public without threat of death by humiliation. (There was also an enormous sense of accomplishment and much high-fiving, but for the purposes of this story: ag shame, poor me.) 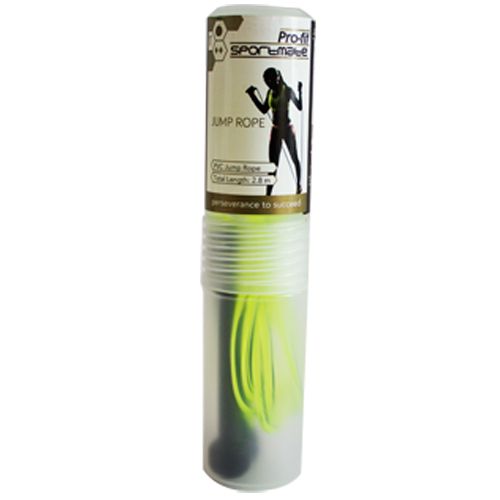 This Sportmate Jump Rope is pretty decently priced at R59.95. You can get it at Dis-Chem

My first few days (okay, weeks… fine, months) were not my most graceful moments. I slotted skipping in between strength moves as active rest breaks for added cardio. The goal: 30 skips without tripping or getting tangled in the rope. The first time I made it to 20, I did a happy dance. So, really, I wasn’t doing much skipping at all. Probably around three minutes total a day, broken up into 30-second attempts.

READ MORE: Which Is Actually Better: Cardio Or Weights?

Eventually, I managed to work my way up to 60 unbroken skips a set – so maybe five minutes a workout – and that’s where I plateaued for about two months. What I wasn’t gaining in numbers, though, I gained in technique… I was no longer leaping high over my rope, terrified of getting a foot caught and face-planting into the gym floor. Instead, I was finally hopping lightly on my toes. And my calves took notice.

Confession: I’ve never been able to skip. Not even as a child. Too much rhythm and coord required. The last two weeks I’ve been working on it and, believe it or not, this is already a VAST improvement. Yes really. ? Yesterday @brynicol gave me this awesome rope for my birthday so now I have no excuse! ? 36 and learning new tricks ? #transformationtuesday #skipping #cardio #birthday #fitness #fitchick #strongnotskinny #gym #workout #36NewTricks

Muscles I Never Knew I Had

Building any kind of muscle definition was honestly the furthest thing from my mind when I started skipping. I thought of the benefits as cardio only; a do-anywhere alternative to the treadmill. In the beginning I wasn’t really hopping long enough at a time to feel anything in my legs. And when they did start burning later on, I was way too preoccupied with not falling on my face to pay much attention.

READ MORE: The Cardio Move You Can Add To Any Workout To Burn More Kilojoules

About five months after I’d started skipping, I suddenly became very concerned. I thought I’d developed elephantitis in my lower legs. They were looking weirdly swollen in a way I’d never seen before. And then I saw myself in a skirt. And I realised that what I had were calf muscles! Four months of skipping had not only taught me to skip and improved my cardio fitness, it had also, sneaky-like, toned my legs! Needless to say, the rope is staying.

Sun’s out, calf muscles out…