“How Sprinting Trimmed My Waist — And Got Me To The Podiums”

Six weeks into the training my body shape changed.

My running partner will be the first to tell you that I’ve never really “trained” for a race. He called my marathon training half-arsed and tells everyone I barely committed to real time on the road ahead of my first Two Oceans Ultra (56km) last year. Which, I reckoned, I was pretty disciplined about. We laughed (me mostly) about how my natural endurance ability allowed me to get away with only training when I wanted to – not when I had to.

I’ve never before had a real “programme” to follow. I love running, so I would often go out and run a 10km or 15km and pay no real attention to how fast I was going, whether I was consistent, where my heart rate was the whole time… I’ve also continued to practise yoga, when I’ve felt like it, of course, and I’ve been quite busy with cycling and mountain biking on the side too. So, you know, I considered myself “fit” and “quite busy”.

Cue this year’s #WHGetsFit challenge and deputy editor Wanita’s voice saying: “This year, you’ve got to level up.” For the past while, “levelling up” for me meant running further – longer distances. Now I was going to train my body to get faster at shorter distances. No more fat chats with friends jogging it out for three hours to reach 30km. No. In fact, my friends laughed when I told them what my proposed schedule looked like.

READ MORE: 10 Things You Should Know Before Running Your First Marathon

Running coach Sean Tait from Off The Mark designed a strict programme to help me get my 10km running time down to 45 minutes. (Because why would I set myself an easy goal?) When I started, I struggled to run a 10km in 50 minutes. I was sitting more around 52 mins. In fact, I did a 10km in one hour on 27 April, just before our challenge started. Granted, it was hilly and humid and in Nelspruit… But still, that was a true reflection of where my running was at. I was doing my usual morning runs at a pace of 5.30mins/km (I have Strava to double-check all my data).

I did a 5km time trial on 3 May to get an indication of how fast I could run if I pushed myself, which I managed at a pace of 4.51min/km. And it was hard! Sean’s programme focused on giving me a mix of sprint sessions, tempo runs and recovery runs. I’d run track sessions a few times before, but, in the past, I just tried to go as fast as I could without paying attention to consistency.

I even woke up and went for a run on my birthday. To be honest, I was a bit hungover, but I still went out there and ran a 6.5km at a 4.50min/km pace.

READ MORE: “I Lost Over 20kgs Because I Fell In Love With Running” 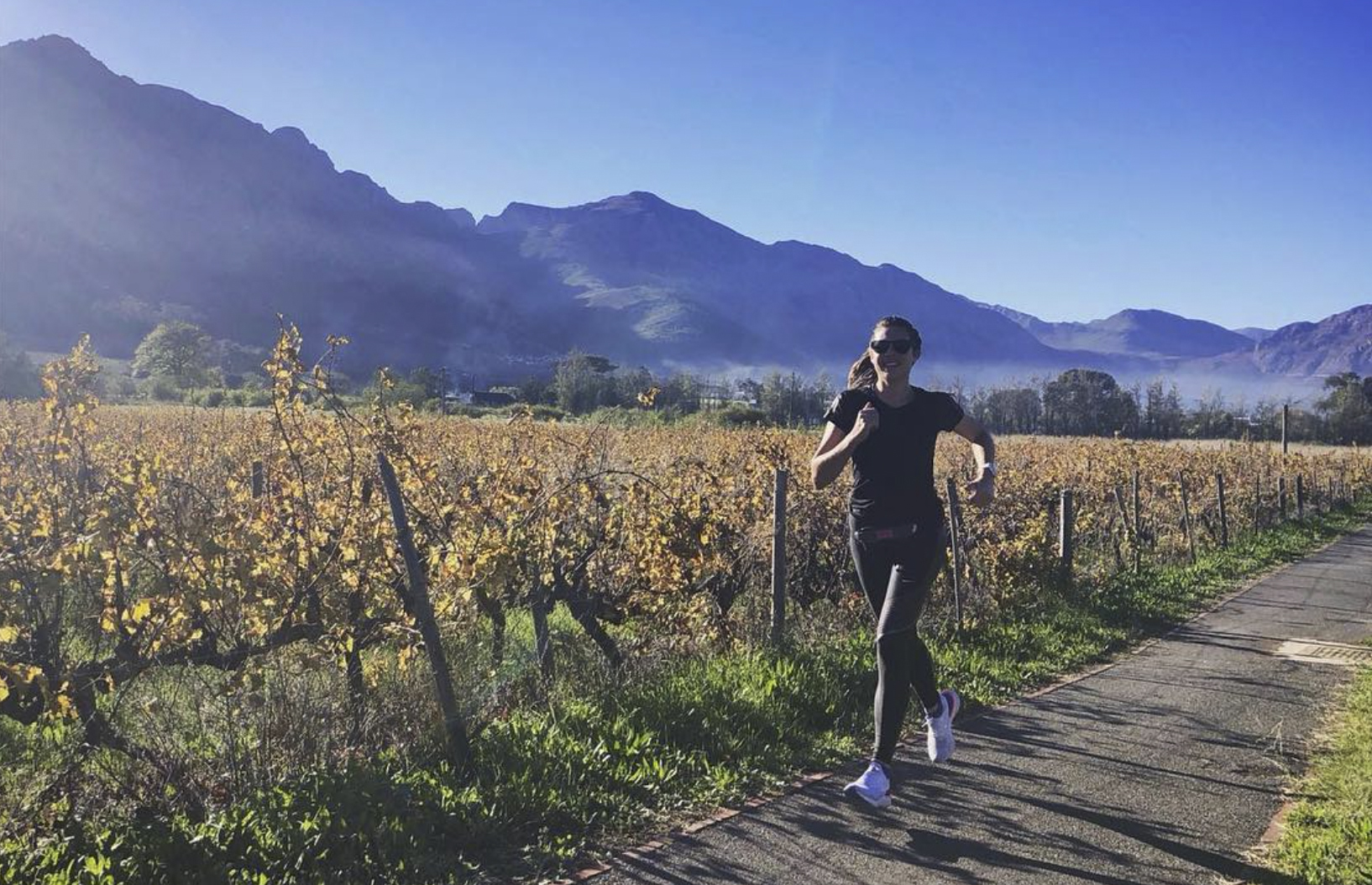 By 1 June I was running 12km in just under an hour – I was chuffed! My regular morning runs had an average page of 5.05min/km. And I felt fitter and stronger when I cycled as well.

Six weeks into the training by body shape had changed. My partner commented on how sexy I was looking, how toned my body was… It was like he had a new-found attraction for me. He also gave me lots of kudos for how hard I was working (but at the same time would tease me terribly if I missed a day in my programme). We enjoyed running together more, because we would run faster, at a pace that was more in line with his training.

During this process, I learnt two things about myself: 1/ I have something in me that wants to rebel against structure! I don’t like strict, rigid programmes. 2/ Those same programmes happen to be very good for me.

Come July and I had entered an event called the Knysna Big 5 Lite, which consisted of five multi-sport events held over a week: a 50km mountain bike race, a 50km road cycling race, an 11km trail run, a 24km MTB X obstacle course race and the Knysna half marathon. Not quite what my programme was training me for, but still, I ran the fastest trail run of my life with an average pace of 5.37min/km – which, for me, is quite fast for running off-road, and I finished the half marathon with a pace of 5.09min/km (1hour50mins). I was pretty strong with all the cycling events too. I ended up coming second overall in the Big 5 competition, which was amazing! 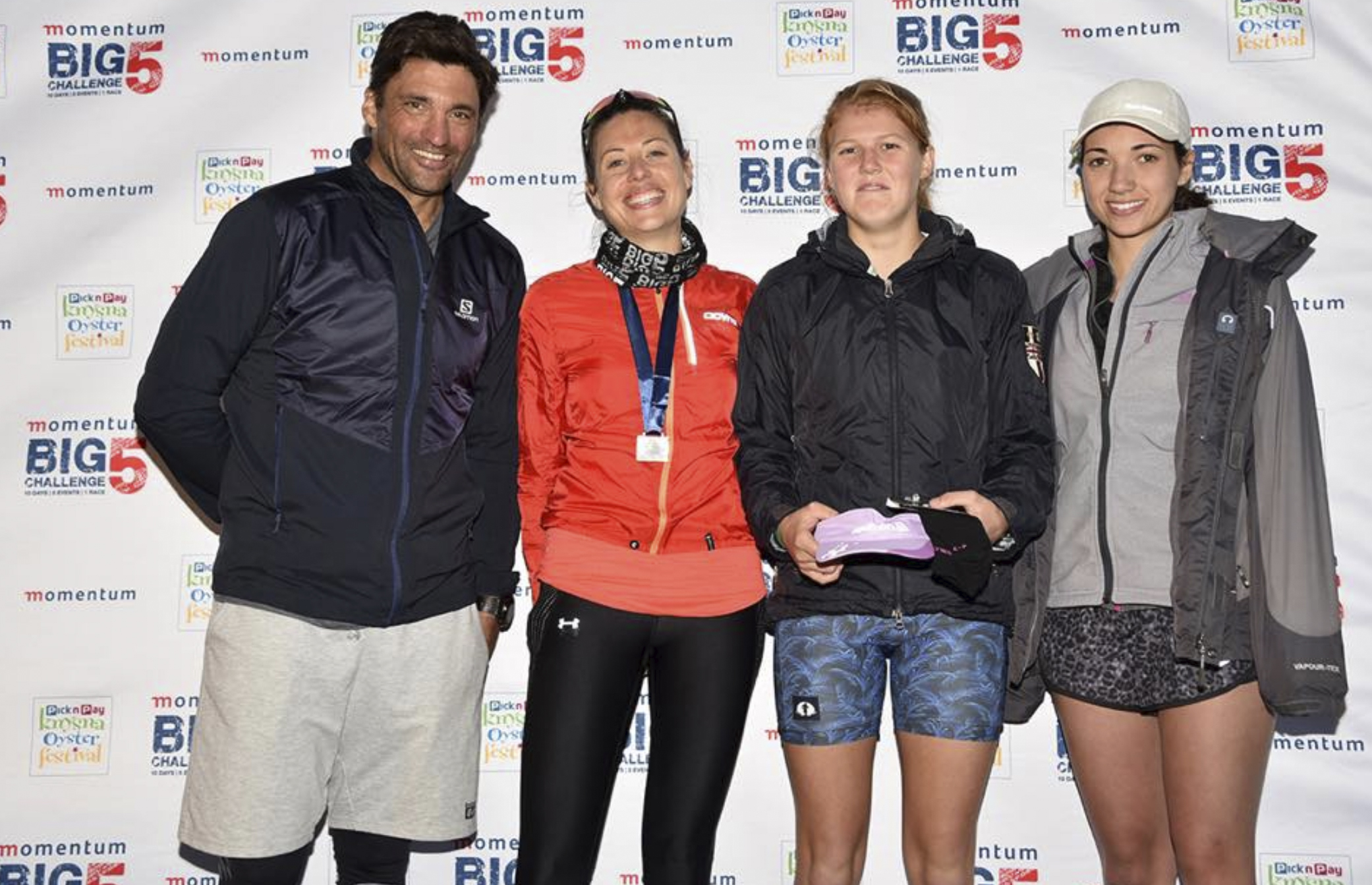 I was finding it challenging to keep up the cycling training and the running training – and I think I only managed to cycle and run twice in one day – whereas that should have been every Sunday’s plan. I made it a priority to get my running training done in the morning as I was much less likely to do it come evening. And I would practise yoga on some evenings to help keep my body stretched out and flexible. All that running and cycling will really tighten you up, which, in my case, would lead to potential injury.

On 4 August – at the end of the challenge – I ran the PPC Riebeek half marathon. It’s a pretty hilly half marathon with the majority of the steep climbs being on the second half of the run. Yet I managed to run the whole thing with a time of 1.47.57 (5.04min/km average pace). I was very happy. I could feel how all the training I’d done had paid off. What’s incredible to note here is that I ran this same half marathon last year when I was doing long-distance training and I ran it in about 2 hours and 10 minutes. 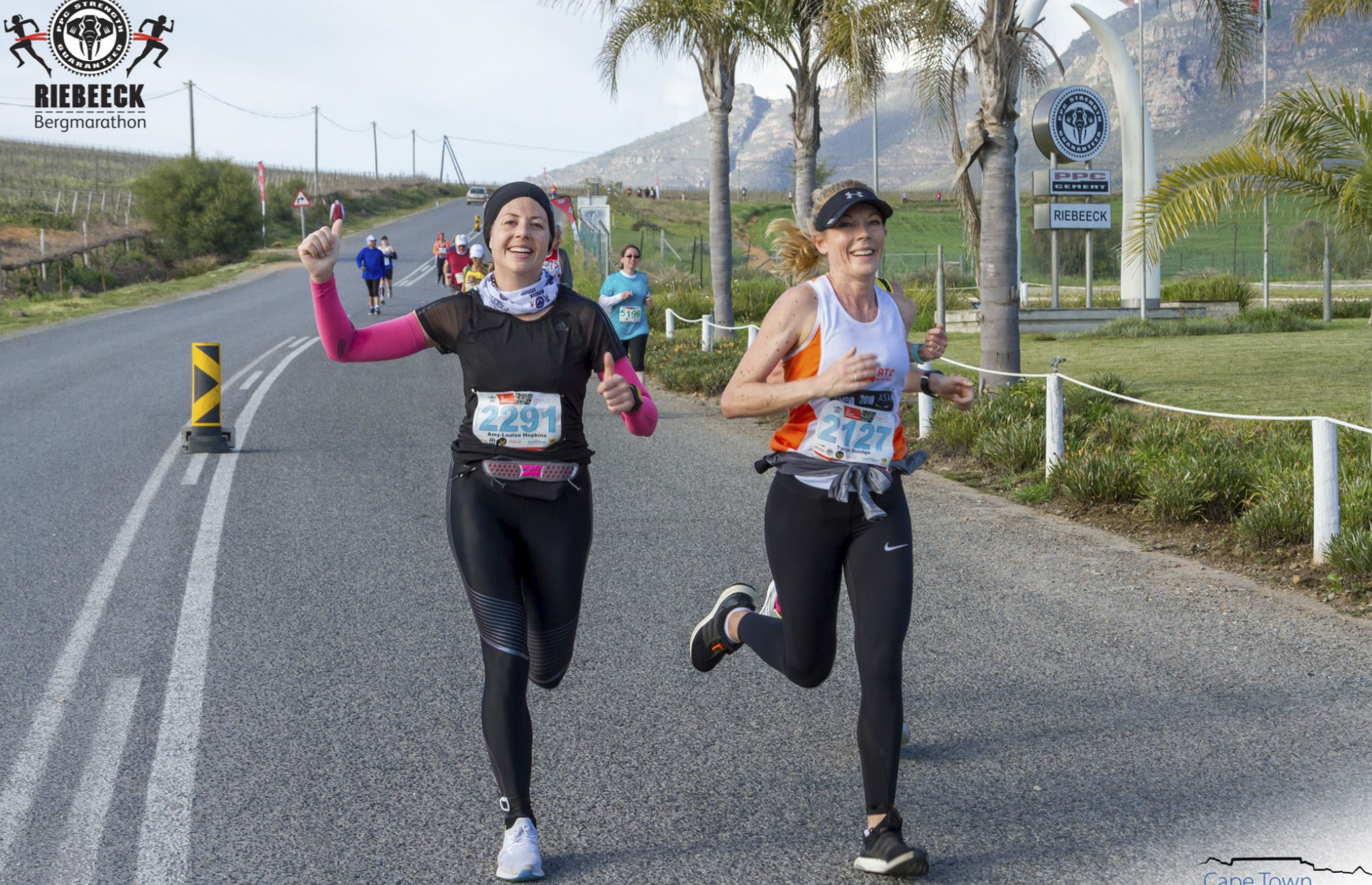 I was also starting to get a lot of compliments from people. I hadn’t really shed kilograms, but I was leaner – especially around my stomach area.  I started feeling a lot more confident and sexy too.

Then, the following weekend my partner and I entered a three-day mountain bike stage race in the Garden Route called the Stormsriver Traverse. We finished second Mixed Team overall. It was so great to be able to share that achievement and celebrate each other’s physical and mental strength. 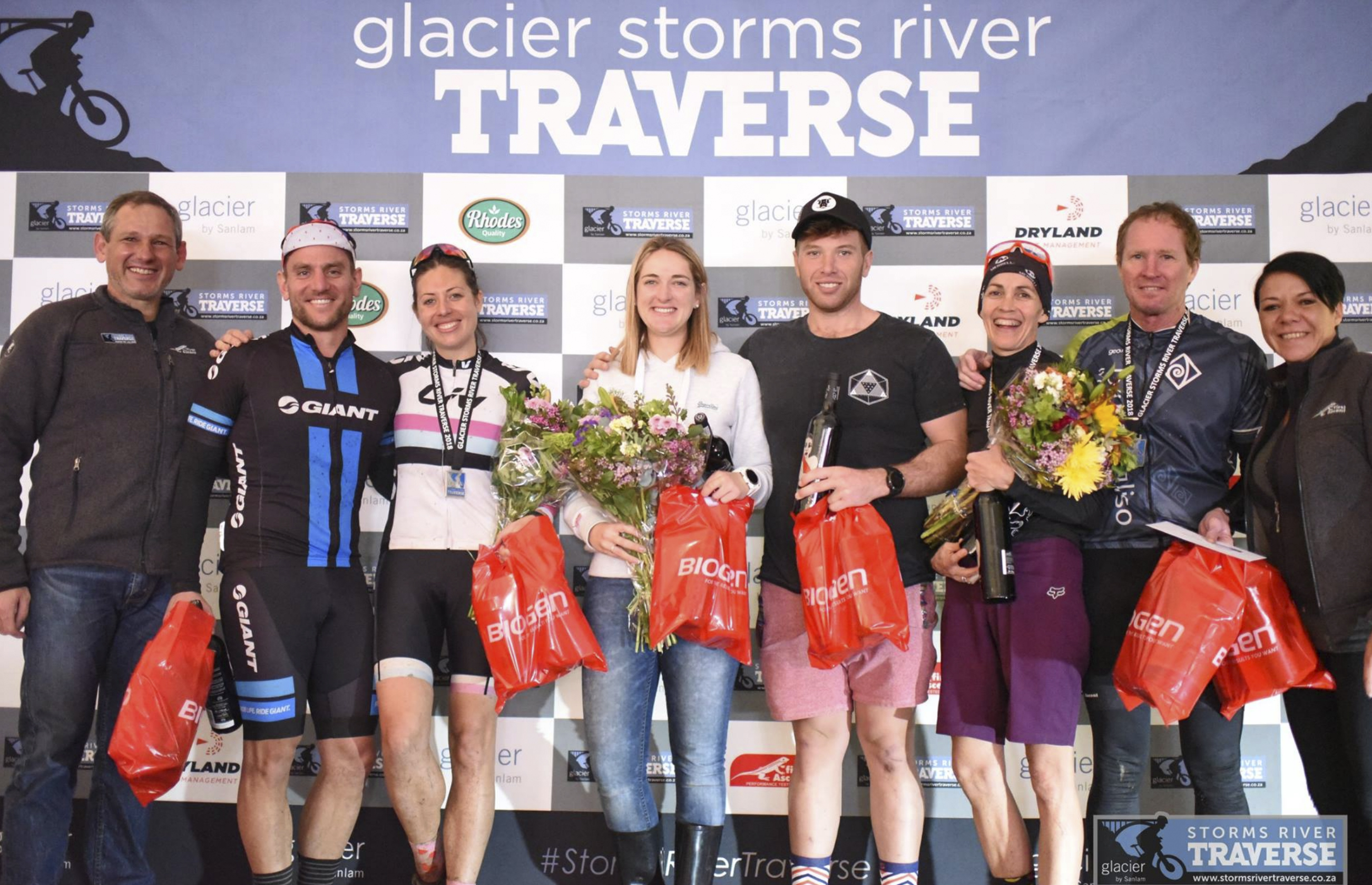 But my biggest takeaway from all of this is that consistency is key. Having a consistent exercise routine is good for me physically and mentally. I felt less stressed, less anxious and happier in general. In fact, taking “rest days” became difficult, because I wanted to exercise. But recovery is also important for the body, so I make sure I have one to two rest days a week. (Oh, and having a good fitness tracker really helps!)