How Many Kilojoules Are In Egg Whites?

It’s actually a lot less than what’s in a whole egg.

Egg white scrambles and omelets have long dominated the “healthy” or “fit” portion of restaurant and fast food menus.

Admittedly, they do have a lot going in their favour. Egg whites have no fat and are a banging source of fill-you-up protein, supplying 3.6 of the whole egg’s six grams.

Another perk: a specific peptide (which is a building block of protein) within the egg white has been shown in preliminary research to help lower blood pressure.

As for how many kilojoules are in egg whites? Just 71, as opposed to 301 kilojoules per whole, large egg. Meaning you can eat a lot of them for tons of filling protein, without going overboard on your kilojoules.

However, as you can see from the below, egg whites don’t contain much besides protein: 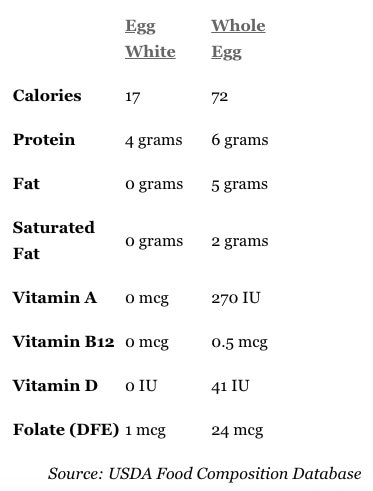 READ MORE: How Many Eggs Is It Really Safe To Eat Per Week?

“I say eat the whole egg. An egg white isn’t healthier than a whole egg,” says Dr Amy Goodson, a sports dietitian in Dallas, Texas. She explains that while people used to fear the cholesterol content in the yolk, “the truth is that eating cholesterol does not raise blood levels of cholesterol. The nutrient benefits of the whole egg are far more valuable,” she says.

There may be one time you want to go white only: “If you’re really trying to cut back on your calories, you can eat the egg white,” she adds—although she stresses that you will also miss out on key vitamins and minerals.

READ MORE: Should You Really Be Eating Raw Eggs?

But the whole egg is pretty good for weight loss, too. If you’re worried about the additional kilojoules or fat, know that some studies show that eating two eggs for breakfast as part of a healthy diet can help you shed kilos.

“The protein and fat content will keep your blood sugar stabilised and you feeling satisfied in the hours after consumption,” adds Goodson.

Count that as a major win for whole eggs.