You Would Never Guess These Fish Meals Were Vegan

Yep, that’s right. There’s a new fish in the sea and just like your friends, this one is fake. Joking! About your pals… But super serious about the fish. Say howzit to this plant-based piranha. Let allll the people eat fish…

An email recently floated into my inbox, inviting me to a lunch launch featuring fish-free fillets by the Fry’s Family Food Co. I can never say no to food, so obvs I said yes. The launch included an enlightening talk by Andre Rutishauser, the ship captain of Sea Shepherd, an organisation that fights illegal fishing.

Decked in my launch day boots and lippy, I Ubered across town to the glorious Harvest Café & Deli (another first for me). What an awesome spot. We were presented with prawn nigiri with wasabi mayo on arrival and it sure looked good. After placing an order for a freshly-pressed juice, I joined a table with two sushi-style edibles on my plate. Tentatively I took my first bite of the plant-based option. Wow. Yum, and are you sure it’s not fish? This battered nugget of joy did indeed taste fishy (in a good way!) and was highly enjoyable.

READ MORE: The 4 Best Vegan Foods To Eat If You’re Trying To Tone Up

Next up, a talk by Sea Shepherd captain. He told us a bit about what’s actually happening in our oceans. And the tale was sad. Not only are our seas being thoroughly exploited, targeted fishing (fishing for a specific type of fish), it turns out, ain’t so good at aiming. That means all your dolphins, sharks and turtles get targeted too. If they survive the crushing weight of the tuna in the nets, they’re lifted onto the deck and dumped back into the ocean. Few survive this trauma.

That’s just the tip of the quickly melting iceberg: there’s also human trafficking, child enslavement, illegal shark fin hunting… The list goes on. This is why Fry’s decided it was high time for a veggie option when it comes to fish.

READ MORE: 12 Restaurants In Cape Town And Joburg To Satisfy Your Vegan Cravings 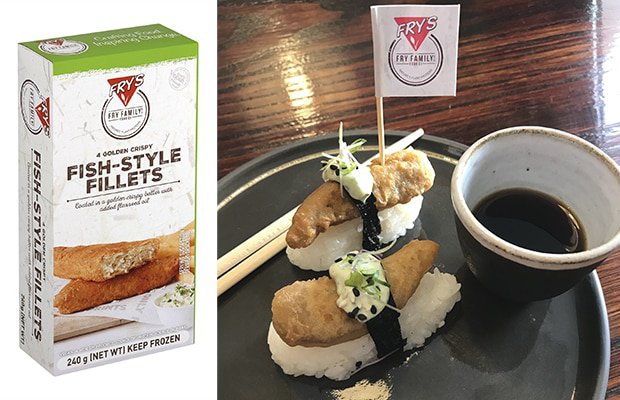 What’s in a fish?

It’s not fish – so what is it? It’s a healthy blend of veggie protein, wheat fibre and a few other grains, flaxseed oil, plus thickening and flavouring. These fillets look and also have the texture of a battered hake fillet. What’s more, they contain more omega-3 than tuna. How about that.

Fish-free. This means that anyone can eat these. Veggie, vegan or any seafood-related allergies? Looks like you’ve found your fish. You can get your hands on these babies at the majority of Spars and Checkers in the frozen section. Alongside the fish fillets, there are also prawn-style pieces. Give ’em a try.