‘Soy Protein Isolate’ Is In So. Many. Things. — But Is It Healthy?

Here's what experts have to say.

It’s in power bars, some breakfast cereals, and even the Impossible Burger: soy protein isolate.

You know what “protein” is. ✔️

But… the isolate part? And the three words strung together? 🤷🏻♀️

Soy protein isolate, a.k.a. SPI, isn’t as confusing as it sounds-promise.

Hate to be the bearer of boring news here, but soy protein isolate is quite literally just that: protein that’s been isolated from soybeans via chemical engineering. In order to do this, the soybeans are first washed with an acid and then neutralized in an alkaline solution, says Michal Hertz, a dietitian in New York City.

At the end of the entire SPI-making process, you’re left with a dry powder that’s about 90-95% protein and nearly carbohydrate- and fat-free, according to the Soyfoods Association of America. Because it’s such a protein powerhouse, this plant-based powder is typically used to enrich other packaged foods from protein bars to veggie burgers. Oh, and you can also blend it into smoothies.

READ MORE: 3 Myths About Soy That You Should Stop Believing Right Now

There’s no denying the fact that SPI is super-charged with protein, but beyond that, its nutritional profile is nothing to write home about.

Here’s a complete breakdown of SPI’s nutrition per 30-gram serving, according to the USDA:

Sure, when you just look at SPI’s numbers by themselves, they don’t seem too shabby. You’ll want to keep in mind that the acid-washing process strips out the nutrients like fibre, zinc, calcium, magnesium, and iron that you’ll find in whole soybeans, though.

There’s also a lot of stuff hiding in the powder that gets introduced during chemical processing, including metals like aluminium and hexane (and as a rule of thumb, Hertz encourages patients to limit the amount of metals in their diet because they can be toxic in large amounts).

Also a little eyebrow-raising: When SPI is being made, a spray-drying process follows acid washing-and that can lead to nitrites being introduced into the formula.

So, should you eat it?

Ehhh…pros caution against it. “I don’t recommend consuming SPI,” says Eliza Whetzel, also a dietician in New York City. “It’s highly processed and chemically treated, which has been shown to interfere with thyroid function and cause gastric distress.” 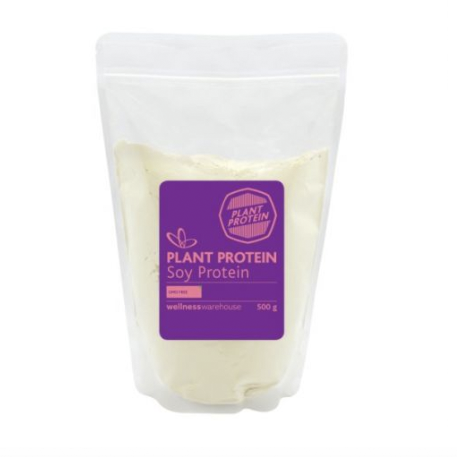 Those potential G.I. issues come into play because SPI has a higher level of something called trypsin inhibitors, or chemicals that mess with your body’s digestion, Hertz explains. So if you have a sensitive stomach, you’ll probably want to steer clear of SPI.

Is there a smarter substitute for SPI?

If you’re a fan of soy and a protein-seeking vegetarian, it’s going to be tough to avoid all processed soy products-they’re in so many things! But both Whetzel and Hertz recommend opting for organic non-GMO natural sources of soy when you can, like edamame, tofu, miso, and tempeh.

That said, soy, like pretty much everything, is best in moderation-no matter how you’re consuming it. If you’re looking for ways to step up your protein intake, mix it up with these expert-approved plant-based proteins: beans, legumes, lentils, nuts, and quinoa.