Here's what being a vegan taught me...

After getting back from a whirlwind trip overseas, my diet was a little off track. By a little, I mean a lot. On my Eurotrip, we basically ate whatever the cheapest option was. Read: lots of carbs and many Belgian waffles.

I kept telling myself that I’d just slip back into my healthy diet when I returned. But then I put that off for the next week, and then it became the next, next week… Eventually, my favourite pair of pants were feeling uncomfortably tight. And that’s even with my regular gym-going and running. It was time for a change. So why not switch things up completely and go vegan. Just for a week…

READ MORE: The 4 Best Vegan Foods To Eat If You’re Trying To Tone Up

So going vegan is not something anyone should just jump into without doing the proper research. It’s vital to follow a balanced diet accompanied with the correct supplements. Luckily one of my close friends, Nadia, has been vegan for a while. As she’s a walking vegan encyclopaedia, I decided to turn to her for advice. For everything. Our WhatsApp convos mainly consisted of me sending pics of food and asking, “Is this vegan?”

READ MORE: 7 Supplements You Might Want To Take If You’re A Vegan

Nadia also introduced me to my new favourite recipe website – minimalistbaker.com. One of the challenges I’d set myself was to do this within my usual budget (which is teeny tiny). I selected a few recipes that I already had ingredients for and made a list of the rest. The first meal I tried: 30-minute quinoa stir-fry. It was quick to whip up, it tasted amazing and I made so much of it that I had meals for a few armies.

One of the cool things Minimalist Baker does is add freezing-and-keeping advice. This meal: four days in a fridge and a month in a freezer. I meal prepped like a boss with some snacky options (dates and almonds) and a dairy milk alternative (I chose soy).

With the help of Minimalist Baker and Nadia, I soon had a bunch of meal options to keep me fuelled throughout the week.

But What About Going Out?

Okay, this is when it gets a leeetle bit tricky. I managed to dodge the tempting pizza when I went out for beers with some buddies. (I’d already had a vegan supper before heading out). But that is not always possible…

I headed to my parents for the weekend and, because it was Dad’s birthday, we headed to the local market to meet up with some friends for a celebratory supper. But search as I may, I could not locate anything vegan – except sushi, which I requested without the fish or mayo. So basically avo and rice. I didn’t really mind because I enjoy both ingredients, but it wasn’t quite as enjoyable as the actual thing. Wine helped too, of course.

READ MORE: 12 Restaurants In Cape Town And Joburg To Satisfy Your Vegan Cravings

So even though at times I was stuck between an unripe avo and a hard place, I still managed to find something that worked. I even (kind of) enjoyed the experience of really searching for something to eat, rather than choosing exactly what my tummy demands. 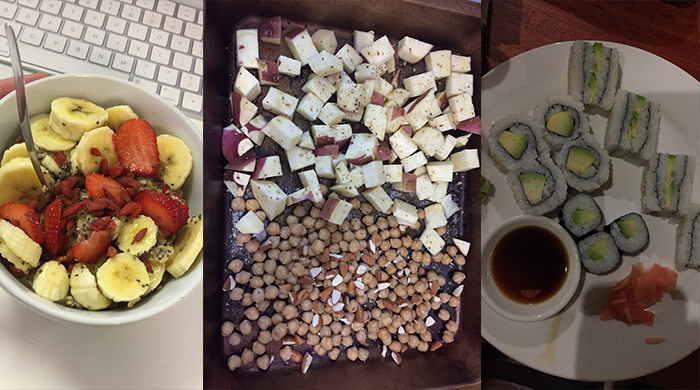 Ending The Week With 41km Of Trail

I reached the end of my vegan week around the same time I’d planned to do a 40+km run with Nadia and two other trail buddies. This would ultimately let me know how the diet had affected my body and how my energy levels were responding. There are, of course, easier ways of checking these things, but I was up for a challenge.

READ MORE: “I Turned Vegan And Was Finally Able To Lose Weight”

The day dawned fresh and drizzly. I packed vegan snacks to munch on, including avo cocoa biscuits that were super-gooey and yummy. Almonds, dates, bananas and naartjies were other options. We set off at a medium pace and I felt incredibly strong and energetic. I honestly felt like I could run forever.

When we reached the 20km mark, two of my friends decided to call it a day. I refused to throw in the towel. I was in for the long haul and still feeling good.

I walked and hobbled a little bit on the last few kays, but Nadia and I still managed a smile as we finally pressed stop on the smartwatch with 41km and 2 682m of elevation. An adventurous day definitely to be repeated! 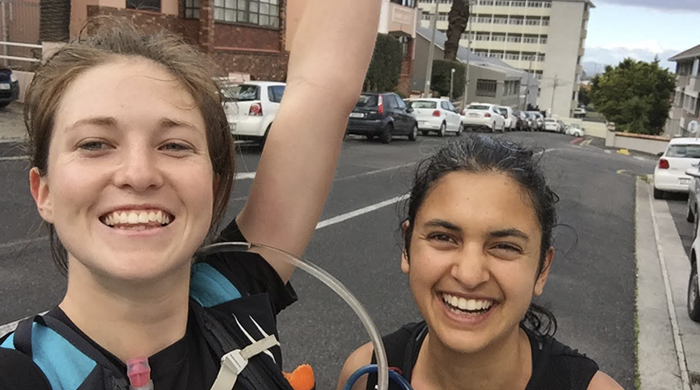 What Being Vegan Taught Me…

The main lesson I learned was that I simply need to open my mind a little when it comes to food choices. I’m used to grabbing the nearest edible thing when I’m hungry, but with a vegan diet, thought comes into the process. There are actually so many vegan options out there – and yummy ones too.

Although I don’t plan on becoming a full-time vegan (my love for biltong and bacon would never allow it), I do plan on incorporating my new-found foodie wisdom into my usual diet.

That’s not to say that I’m not up for the Vegan Challenge this October. I’ve signed and committed, so that bacon and biltong will just have to wait until November.