Should you be worried if you're on the Pill?

We’re all warned that there are side effects and risks associated with taking birth control pills, but besides wondering if your mood swings can be blamed on the pill, have you ever given it a second thought? No? Neither had Michelle Mardon. Hers was a rare case where a combination of birth control pills and extremely bad luck resulted in a liver tumour (hepatic adenoma) – a ticking time bomb that could have potentially killed her. 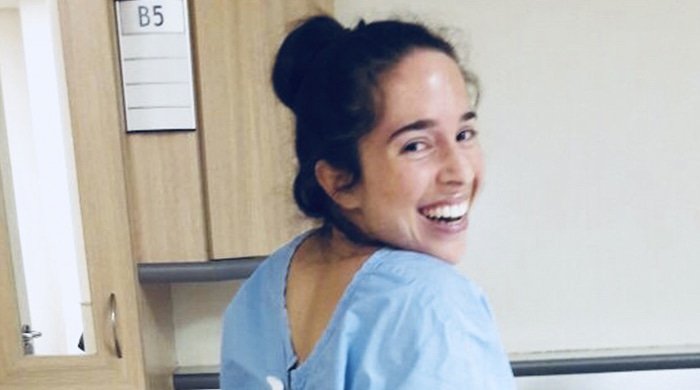 Michelle’s Story, In Her Own Words…

“My name is Michelle Mardon, I’m 30 years old and I’m from Durban. This is my story about how 13 years on various birth control pills gave me a dangerous liver tumour that I had removed last year. I hope to educate and help other women. It’s crucial to listen to our bodies, and be brave when the outcome isn’t what we hoped for…

“In August of 2016, having been nauseous with intermittent right upper abdominal pain for two weeks (this had been happening on and off for a year or two), my mother encouraged me to see my GP. The GP thought I may have gastritis and sent me for an ultrasound scan as we have a family history of gallstones. They found a large tumour on my liver instead.

READ MORE: How The Birth Control Pill Can Interfere With Your Body

“The following day, I saw a general surgeon, who booked me in for an endoscopy and CT scan. The endoscopy was clear. The scan revealed what we had feared: a hepatic adenoma. Adenomas are very dangerous when they grow past 5cm as this increases their chance of spontaneous rupture – they can burst and kill a person within 10 minutes.

“They also have malignant potential. My tumour was 5cm x 4.5cm x 4.7cm. Unfortunately, the adenoma was situated in the worst possible spot, on the porta hepatis, better described as the confluence of all the major structures of the liver. This meant surgery was high risk and the surgeon was hesitant to operate. 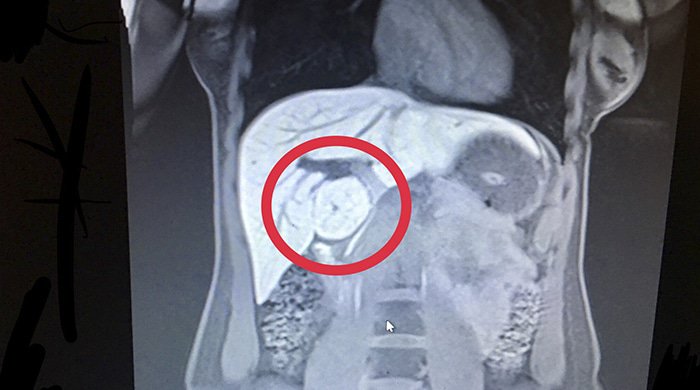 “The surgeon was also not 100 percent convinced of the adenoma diagnosis so he sent me for an MRI, the results of which confused everyone. The tumour now looked like a totally ‘safe’ lesion with no chance of turning into cancer, nor spontaneously rupturing. This is called a focal nodular hyperplasia (FNH). I was sent home with a script for pain meds.”

A Second Opinion… And Then A Third

“One month later, the pain and nausea having worsened, I sought a second opinion. The second surgeon asked me to stop taking birth control pills for six months. This would be followed up with an ultrasound scan to see if the tumour reduced in size without the presence of the pill. It didn’t and the surgeon didn’t see the need for such risky surgery to remove a benign, harmless tumour. I was sent home again, another script for pain meds in hand, and told to live with it.

“Six months later, I sought a third opinion. The pain, now a constant deep stitch feeling emanating from the the right upper side of my stomach to the back of my right shoulder blade. It was no longer something I was prepared to live with.

READ MORE: Exactly What To Do If You Forget To Take Your Birth Control Pill

“I flew to Joburg to see a liver transplant surgeon at the WITS Donald Gordon Medical Centre. He explained my symptoms. The tumour was strangling my gallbladder as well as partially obstructing my duodenum. This meant my food wasn’t passing through my stomach properly, nor was it being broken down thoroughly.

“’I don’t like the look of it and disagree with the diagnosis that it’s an FNH,’ he said. ‘But it’s major surgery and the decision to go ahead is up to you.’ Surgery would be five to six hours, involve a 25-30cm cut across my abdomen, three days in ICU and another 10 days in hospital. I’d need two months off work and six months to a year until full recovery.

“My final question to him: ‘Are you going to kill me Prof?’ His reply: ‘It’s not my first time at the rodeo.’ He ended up saving my life.”

“I Felt As Though I Were Sending Myself To The Slaughter”

“My surgery was scheduled for 8:30am on Monday 3 July 2017. I was wheeled into theatre without pre-meds, using breathing and mind distraction techniques to calm myself down.

“The op was complete after just three hours and I had no complications. The tumour turned out to be next to the porta hepatis, rather than on it – a miracle. The lab results proved that the tumour was indeed a dangerous adenoma caused by 13 years on birth control pills. It could have ruptured and killed me at any moment, had I left it.

READ MORE: “My Birth Control Gave Me A Blood Clot” — Here’s What You Need To Know 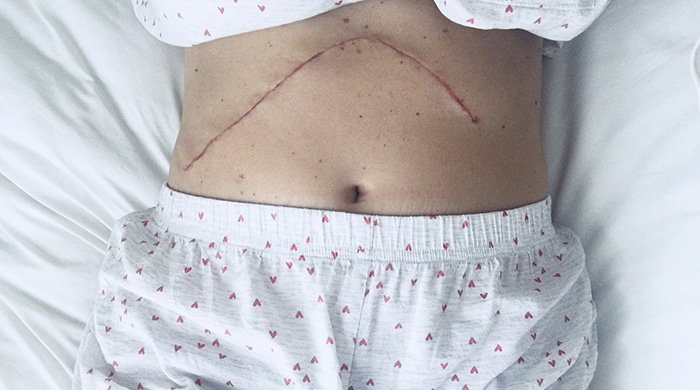 “Recovery was much better than expected. I’ve always been a fitness enthusiast and not being able run or gym, let alone walk properly, was trying at times, but six months post-op, I was pretty much back to normal.

“I now have a large 25cm scar that I wear proudly despite the looks it gets in the gym changing room. I’ve not only been given a second chance at life, I see life through an altered lens. To think I had been so image-conscious prior to this experience. Now I have a second chance to focus on what really matters, and a pretty cool scar to go with it.”

How Risky Is The Pill, Really?

“So, what are the chances of getting a hepatic adenoma from using oral contraceptives?” This was the first thing I ask Dr Graham Stapleton, who specialises in liver and pancreatic surgery – especially the removal of tumours of the liver and pancreas.

“They are extremely rare,” he begins. “A hepatic adenoma is an uncommon solid liver lesion seen mainly in women of child-bearing age. They were rarely reported before 1960. Oral contraceptives were introduced in the 1960’s, and after that the incidence of adenomas increased,” Stapleton says. “[Adenomas] are more commonly seen in patients using oral contraceptives with high dosages of oestrogen and for a long duration.”

But that’s not the only cause of adenomas. “They also occur with anabolic steroids, so we’re starting to see them in bodybuilders. A small study also suggests that being overweight or obese may cause an increase in risk. A fatty liver is a factor,” Stapleton warns. Hepatic adenomas are also linked to diabetes and glycogen storage disease.

“[Adenomas] develop from an interaction between gene defects and environmental changes, such as oral contraceptive pills,” he adds. However, the dosage of oestrogen in oral contraceptives nowadays is much lower than it used to be in the 1960’s.

Out of all the many patients that Stapleton has treated, he has only had one patient with a hepatic adenoma and this was due to obesity. “They are extremely rare,” he reiterates. Adenomas occur in less than 0.004 percent of the population that are at risk.

“There is about a four percent chance of malignant transformation and a one in four chance of rapturing and bleeding into the abdominal cavity,” Stapleton says. “Adenomas we do take seriously and we do take them out,” he concludes.