Who knew a simple sarmie could have such a drastic effect!

“This won’t hurt,” the nurse assures me as she swabs the back of my upper arm with sterilising alcohol. I don’t believe her. Sure, the thingamabob in her hand looks just like a regular plastic stamp, but I’ve seen what lurks in the middle — a needle I’d guess to be at least two centimetres long.

I’m not scared of needles, but I know for certain I’m going to feel this blood sugar monitor going into my skin. Alcohol dry, she gets it in position. I brace. There’s a click. And… nothing. Not even a sting. But where once my arm was bare, I now have a plastic disk attached — a FreeStyle Libre sensor to monitor my blood sugar. I don’t know it yet, but I’m about to develop a new obsession.

READ MORE: 11 Subtle Signs You Might Actually Have Diabetes

The FreeStyle Libre is a blood sugar monitoring device that measures blood glucose levels without you having to prick your finger. It’s a smooth plastic disk that sits on the back of your arm (up to you which one) where it won’t interfere with your life. Once it’s attached, you can exercise, shower and swim and it won’t budge. It lasts two weeks — then you’ll need to pull it out and replace it with a new one.

Once the FreeStyle Libre is in your arm, you can swim, shower and exercise freely.

To start measuring your blood sugar, you’ll need to download the FreeStyle Libre app (it’s free and works on iPhone 7 [OS11] and higher or Android Lollipop and higher). The guided set-up is quick, but there’s a 30-minute calibration time before you can start scanning. Then, all you need to do to check your blood sugar is scan the disk with the app like you would scan a QR code. It works through your clothes and you get an immediate reading, no finger prick required. If you don’t have a compatible smartphone, you can buy a specialised scanner for R990.

The FreeStyle Libre is aimed at diabetics — especially kids and those newly diagnosed, who may avoid measuring their blood glucose levels because of the pain that comes with a finger prick.

According to Dr Joel Dave, head of the Division of Endocrinology at UCT, a person with diabetes should be doing a finger prick at every mealtime and before driving. That adds up to around eight times a day for the average adult. Ouch. No wonder patients not checking their blood sugar is one of the leading reasons for diabetes complications. And considering those can include loss of a limb and blindness, you don’t want to mess around with this disease.

Scanning the FreeStyle Libre device is painless and easy. My only problem was remembering to do it, but you can set a reminder for the app to prompt you as often as you need. 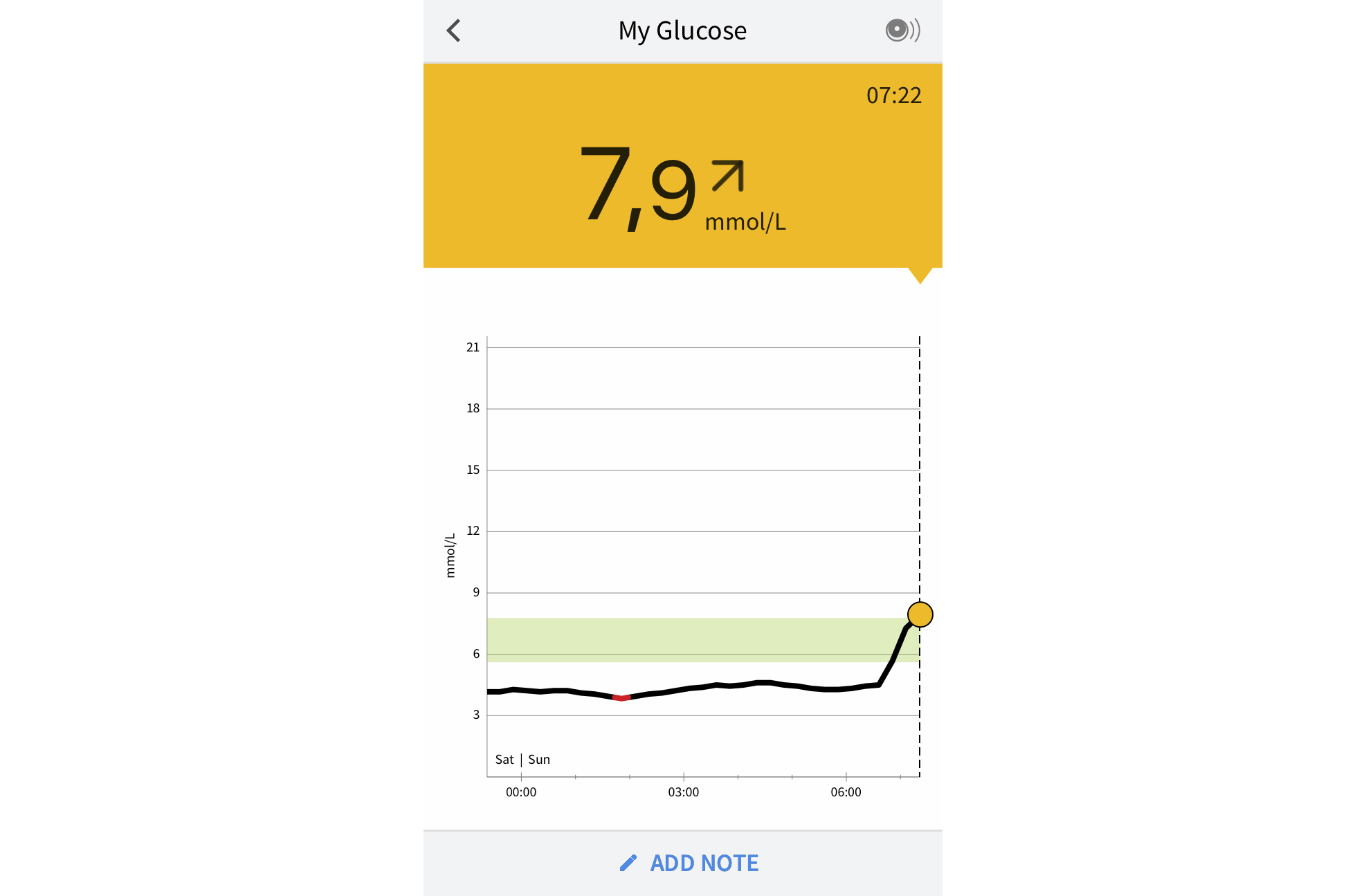 The highest blood sugar spike I had during the two weeks was 8.8mmol/L after having a carb-heavy meal and white wine. I was alarmed to see the effect it had.

READ MORE: Pregnancy Gave Me Diabetes. And I Had No Idea!

What it tells you

Like a finger prick test, an individual scan will give you your blood sugar reading in that moment. You can log what you just ate or how much you exercised. And that’s where my obsession came in. I was especially intrigued to see how a high-intensity workout would send my levels crashing. It explains the dizziness I often feel after HIIT.

But unlike with a finger prick, this device also tells you whether your levels are stable, going up or going down. If you’re diabetic, that info could help you avoid a low before it happens.

You’ll also have access to graphs that show patterns over time — if you’re diabetic, that’s useful info for both you and your doctor in managing your diabetes. I picked up that spirits caused my blood sugar to dip, but wine made it spike, as did most meals. 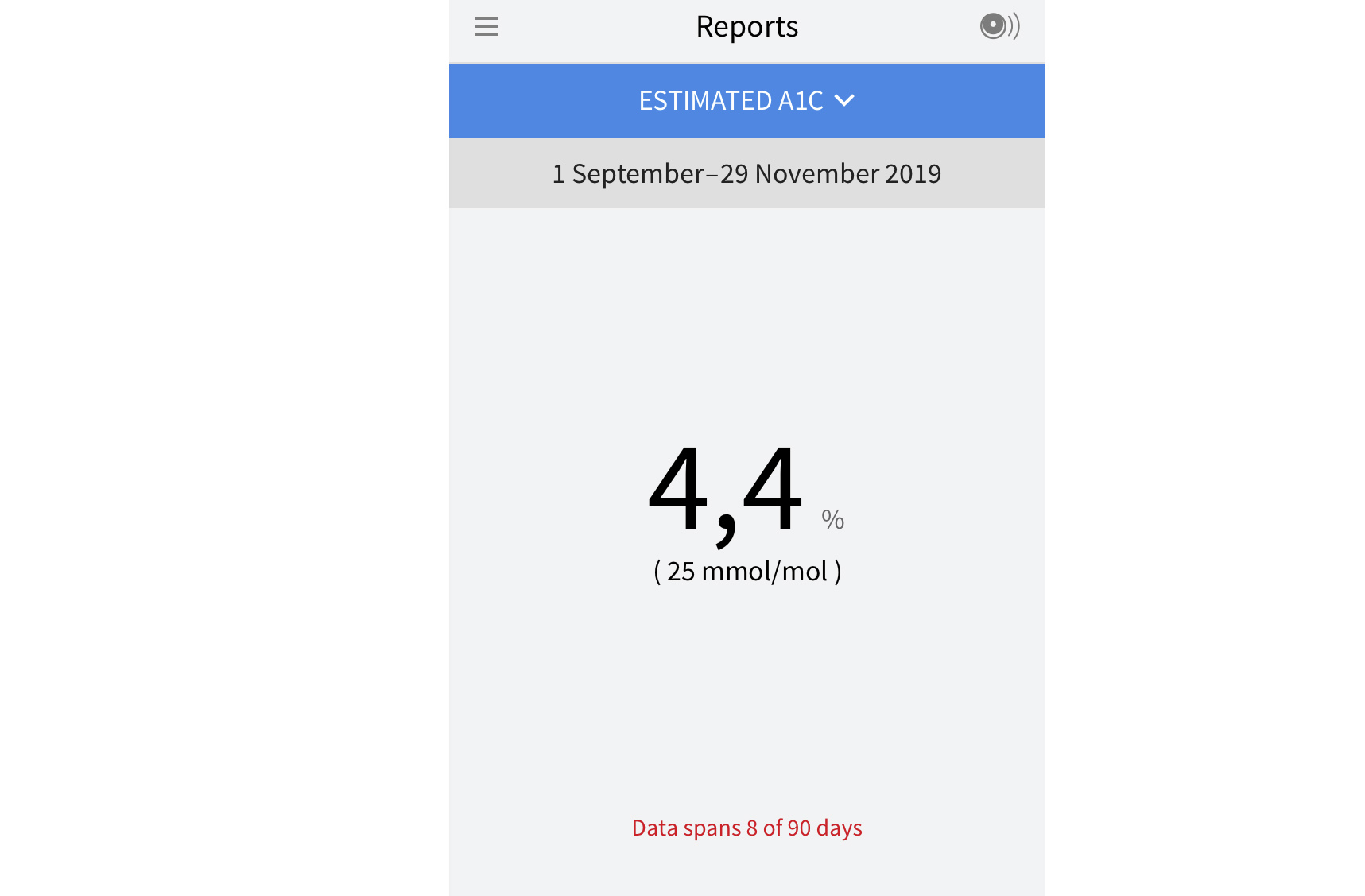 Over time the FreeStyle Libre can estimate your A1c – an average blood glucose measurement over three months. A reading higher than 5.6% indicates you could be at risk for diabetes. Higher than 6.4% means you might have diabetes. A normal range is between 4% and 5.6%.

Is it worth it?

This alternative to finger pricking doesn’t hurt and you can see which way your blood sugar is going, as well as what it currently is. Plus you get the benefits of seeing patterns develop. What it won’t do is alert you if you go into a low. There are devices that do that through continuous monitoring via a bluetooth link to your phone, but they’re more expensive.

The FreeStyle Libre costs R1 980 a month (R990 a sensor, replaced every two weeks). The catch: currently devices like this are not covered by medical aid, so if you’re disciplined about finger pricks, you may want to stick with them. And if you’re a diabetic who’s prone to sudden dangerous lows, a continuous monitor that sends out alerts may be better.

But if the pain and inconvenience of a finger prick are the only things standing between you and managing your diabetes, this is a good option.

Where to get it

I got mine fitted at the new FreeStyle Libre walk-in centre at M-kem in Bellville, Cape Town. You can also order the device online and fit it yourself.