So, Um, Why Is My Discharge Brown?

There comes a time in most women’s lives when she looks down at her underwear and wonders, What the actual eff is that?!

Okay, maybe that’s a little extreme. But weird-coloured vaginal discharge can seriously freak you TF out—especially when it’s brown. But before you start spiralling, it’s probably helpful to know what that brown discharge means, when it’s NBD, and when you should see your gynae about it.

What exactly is discharge, anyway?

Vaginal discharge is, basically, mucosal secretions produced by glands in your cervix and walls of your vagina, according to the U.S. National Library of Medicine.

Discharge keeps your purpose is to keep your vagina clean and healthy by clearing out dead cells from its lining, per the American College of Obstetricians and Gynecologists(ACOG). It also provides lubrication to protect your vagina from infection and irritation.

READ MORE: Here’s Why Your Vagina Might Be Ruining Your Underwear

So, why is mine brown?

We’re programmed to think that mucus-like white or clear discharge is what’s considered normal—and it is—but your discharge can actually vary in colour and consistency, depending on where you are in your menstrual cycle, per ACOG.

So if you regularly experience brown discharge one to two days before and/or after your period, it’s likely nothing to worry about, says Dr. Pamela D. Berens, a professor of obstetrics, gynaecology, and reproductive sciences at McGovern Medical School at the University of Texas Health Science Center at Houston. 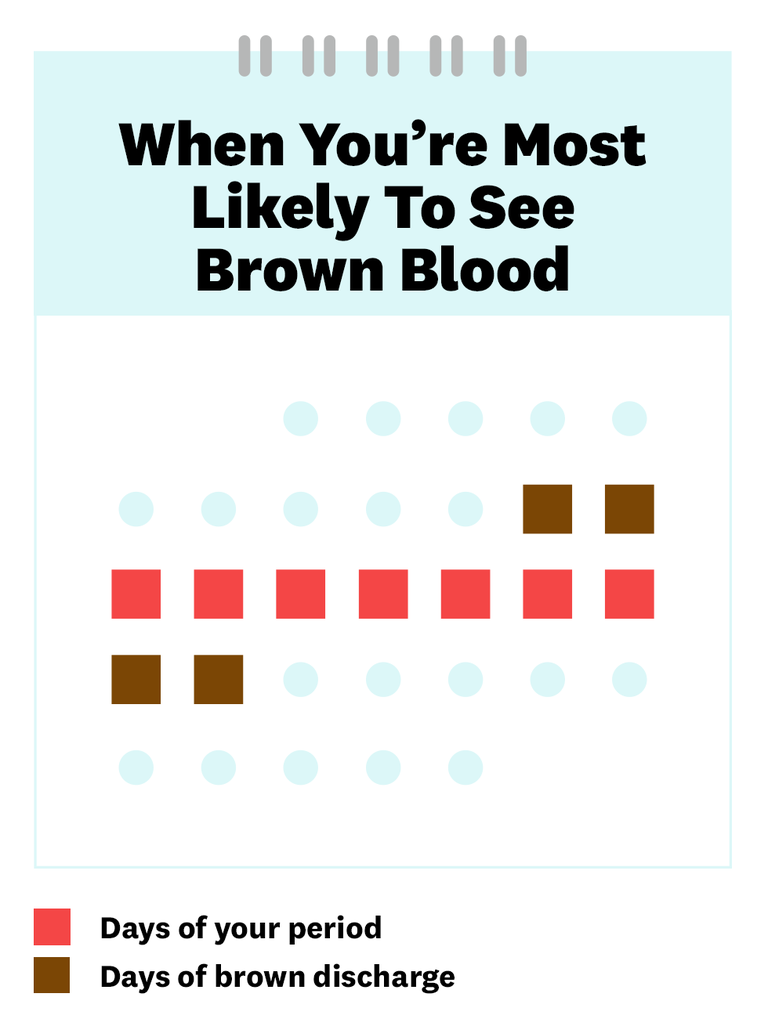 In that case, it’s probably just regular discharge mixed with new blood that isn’t heavily flowing yet, or old blood that’s had a chance to mix with air. (FYI: That process is called oxidization—when red blood mixes with air and turns a brownish hue).

Another potential cause: Your birth-control methods. “If you’re using a birth-control method that only releases the hormone progestin (like a hormonal IUD, an arm implant, or progestin-only mini pills), irregular spotting is totally normal and typically to be expected,” says Berens.

The same goes for other hormonal methods of birth control that contain progestin, along with a lower dose of oestrogen (like the Pill, patch, or vaginal ring)—they might cause spotting or darker coloured discharge.

That spotting or darker coloured discharge comes from lower levels of oestrogen in the body, which makes the uterine lining less stable—and when that happens, you’re more likely to experience breakthrough bleeding that can be brown by the time you see it mixed with your discharge, says Berens.

Again, brown discharge when it’s related to your menstrual cycle is totally normal. But if it’s still bothersome to you, you can take steps to eliminate it by switching to a birth-control method with a higher dose of oestrogen, says Berens.

Though, TBH, many women don’t choose to go that route, since higher oestrogen levels increase your risk of side effects like nausea and blood clots—not really a fair tradeoff for sparing your underwear.

READ MORE: This Is How Your Discharge Changes, According To Your Cycle

Should you ever worry about brown discharge?

If your dark discharge comes on suddenly and you’re not on hormonal birth control, it could be a sign of something more serious.

“Irregular bleeding or spotting could be a sign of an issue related to early pregnancy, such as miscarriage or ectopic pregnancy, so if it’s possible you might be pregnant, it’s important to see your doctor as soon as possible,” says Berens.

If you experience irregular cycles or spotting after sex, brown discharge could be also be a sign of a yeast, bacterial, or sexually transmitted infection, or a sign of an undiagnosed condition such as polycystic ovarian syndrome (PCOS), a hormonal disorder that causes the ovaries to enlarge and fail to release an egg regularly.

PCOS also usually causes women to skip cycles for an extended period of time, allowing the uterine lining to grow increasingly thicker and unstable, leading to irregular spotting or darker discharge between periods, in addition to heavy, irregular bleeding.

“If this could be what’s happening, you would want to get a proper diagnosis and treatment plan, because a thick uterine lining could eventually lead to something more serious, like uterine or endometrial cancer,” Berens says.

It’s also possible that experiencing spotting in between your cycles (again, if you’re not on hormonal birth control) could be a sign of cervical or uterine polyps, which are growths in the cervix and uterus that are typically non-cancerous (worth noting: This is typically seen in women over 35).

Whatever your situation may be, Berens recommends always bringing up unusual spotting or discharge with your doctor to rule out the possibility of pregnancy and infection and to make sure you have an up-to-date, normal Pap smear.

“Your doctor may just reassure you that your discharge is normal, but it’s always important to understand why it’s happening and confirm whether or not it’s actually a problem,” says Berens.