"There have been cases... where women are told that the efficacy of the pills can be ensured if it is inserted by a penis into the uterus."

We’ve all seen them. The abortion posters plastered all over our cities’ electricity boxes, streetlight poles and on public dustbins that read: “100% SAFE ABORTION: SAME DAY – NO PAIN” usually accompanied by a cellphone number.

Many of us might have even laughed at the thought that whoever’s putting the posters up believes they’re going to receive a call for their services – but the reality is: those calls come in.

These illegal and unsafe abortions advertised publicly have put so many women, young and old, in danger of lifelong medical complications, injury, disability and in many instances, death. 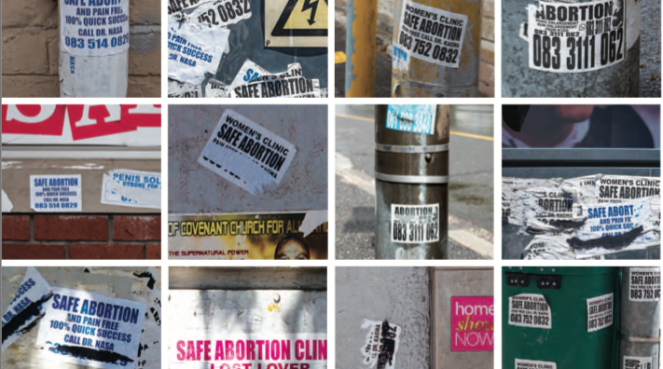 Statistics reveal that globally, unsafe abortion is one of the top five causes of maternal mortality. According to the South African Government News Agency, it’s estimated that between 52% and 58% of the +- 260 000 abortions that take place in South Africa every year are illegal. This is not a small issue and it can sometimes feel like no one is doing anything about it.

Who’s doing something about it?

But not all voices have silenced themselves to this issue. Just last week, a group called Sexual Reproductive Health For Your Information (or #SRHFYI for short) did a clean-up campaign in the streets of Johannesburg where they managed to remove over 1 000 of these posters.

READ MORE: Where Should You Go For A Safe Abortion In South Africa?

We spoke to the project liaison of #SRHFYI Kanyisa Booi to unpack just how much of an impact these posters have, and how they’ve affected young women who have fallen victim to their false and dangerous claims.

“We wanted to remind everyone that abortion services form part of healthcare, which makes it a basic human right,” Booi tells us. “The latest campaign to take down unsafe abortion fliers was informed by the very real danger posed by unqualified, undesignated people who advertise misinformation. We sought to highlight the need for clearly marked safe abortion spaces and to share a concern about limited facilities to have the abortion service.”

Booi highlights some of the dangers the visibility of these posters on our streets pose:

In 2017, global human rights organisation Amnesty International did research that revealed that less than 7% of the country’s 3 880 (at the time) public health facilities provide abortions. This indicates that accessibility is a big issue, particularly for poorer communities.

“Choosing to have an abortion is a personal decision based on women and girls’ individual social or economic life circumstances,” the report says. “High rates of sexual violence in South Africa, as well as unpredictable health and life risks in pregnancy and the possibility of severe foetal abnormalities, mean that no matter how well fertility management services and information are implemented, there will always be a need to ensure access to abortion services.”

READ MORE: Everything You Need To Know About The Abortion Pill

Booi believes that both private and public health facilities that provide abortions must be clearly marked and allowed to advertise their termination services so that women know where to go. Moreover, she also believes that there needs to be significant consequences for any healthcare worker who obstructs care by denying and not referring those in need.

How to spot an illegal abortion

The KZN Health Department outlines some of the most common signs that indicate that the abortion is illegal: If any provider…

If you’re looking for a legal, safe and reliable clinic to have an abortion, Marie Stopes South Africa has centres all across the country that you can search through here.

Remember that when done by the right professionals, abortion is safe. It doesn’t pose a risk to having children in the future or to your overall health unless there’s a rare/serious complication that hasn’t been treated.