“Help, I Married A Feeder… And He Likes His Women Big”

For Thusani, night time became a personal terror because it represented intimacy...

Enter the Feeder. Dr Mark Griffiths, professor of behavioural addiction at Nottingham Trent University, describes ‘feederism’ as the “sexual arousal and gratification stimulated through the partner (referred to as the ‘feedee’) gaining body fat.”

Feederism is a practice often carried out by fat admirers or ‘chubby chasers’ within a sexual relationship, where sexual gratification is obtained through over-eating and increasing girth. A guy who gets turned on by making and feeding you comfort food? So far, okay… But it’s all fun and games, until you wake up one day and realise how much weight you’ve gained – and how much life you’ve lost.

“I Married A Feeder Without Knowing It”

“I am that woman, who, through life’s circumstances, woke up one day to find myself weighing an incredible 147kg…” This sentence comes from an email Thusani, a reader, sent Women’s Health. Here, she shares her harrowing experience with feederism.

Thusani married her husband (now ex) in 2009. At the time, she had no idea that he was a feeder. “I didn’t know that black guys could even be feeders,” she admits. “I remember once watching a TV series about feeders and never thought I’d be confronted with that issue in my own life.” There were signs along the way, but she didn’t pick them up. It’s easy to ignore minor problems when you’re in love.

READ MORE: The One Thing You Shouldn’t Do When Your Partner Is Going Through A Hard Time

He would say, “I just want a woman your size who is gorgeously beautiful and able to own it… [Someone who] comes across as sexy – just like you do.” Thusani was at a point in life when she wanted to lose weight and reach a healthier number on the scale. But he would say, “Please don’t change how you look… Stay as gorgeous and voluptuous as you are!” Caught between pleasing her new husband and putting her own health at risk, Thusani describes it as “a beautiful recipe for disaster.”

As a powerful career-woman, Thusani knew how to conduct herself and exude a false sense of confidence, but underneath that was not the case. “I’m great at outwardly projecting body confidence, but I’m drowning in this very same body.”

On The Feeder Menu…

“My ex-hubby made sure that I got a tea/coffee before I even got out of bed. I never bothered counting the number of teaspoons of sugar that went in,” Thusani says. During the week, the mornings were too rushed for a full-on breakfast, but weekends were a different story.

“Every Saturday morning, I would be woken up by the unmistakable smell of meat (mostly red meat) as it was cooking on the braai!” She exclaims. The braaied breakfast would consist of red meat, boerewors, pap, rolls, chips and more. “How was a woman supposed to be losing weight when she was being served an assortment of meats by the plateful, even before she was properly awake?” Thusani asks.

“While my ex-husband was feeding me all these treats, he barely ate a quarter of what I would eat, and his quantities were almost always tiny.” What’s more, the couple did a lot of entertaining – almost always three course meals. “From starter to mounds of unrestricted mains, always concluded with dessert and wine.”

READ MORE: The Sirtfood Diet Includes Wine And Chocolate, But Does It Work?

It still pains Thusani to look back on her relationship and what unfolded in her marriage. “I failed to ‘hear’ my ex-husband when he explained in his own way that he was a feeder,” she adds.

Thusani had weight problems when she met her ex and “it is a very real possibility that I was already within the weight bracket he would have liked,” she admits. “He succeeded in talking me out of losing weight for a while,” she says, “and I walked down the isle unhappy with how I looked in my wedding gown.” He, on the other hand, was very happy indeed.

Now before your imagination goes wild, it wasn’t that he was dominant or force-feeding her. “I was married to the most gentle and humble of guys,” Thusani says, but somehow, even though she could see the weight gain and feel its effects (palpitations and excessive sweating), she couldn’t stop. “The more I gained, the more my husband seemed content.”

READ MORE: Is The First Year Of Marriage Really The Hardest?

“There’s no way to find a healthy balance between a spouse who is trying to feed you to death, while you are doing everything in your power to lose weight…” Thusani describes her feeder relationship as a constant battlefield. Everything revolved around eating. With the weight loss that she so desperately wanted (and needed) came a loss of intimacy in their marriage.

“I’d lost touch with who I was. I hated and could not relate to the woman who would stare at me from the mirror every single morning. This translated to me hating and dreading the intimate touch from my betrothed prince in the bedroom.”

For Thusani, night time became a personal terror because it represented intimacy. “Who in their right mind would want intimacy when they don’t even remotely like the woman who is staring back at them in the mirror?” she asks. “While this dialogue is going on in your head as the feedee, you have no idea that the feeder is salivating every time he sees those rolls of fat. He is in Nirvana and you are in hell on earth in the matrimonial bed.”

“It took me a while to realise that same partner who would jump into a car to drive me to the fast-food drive-through would never drive me to a start of a marathon.” Thusani says. “And there is always going to be one spouse who is going to wake up and realise that they’ve lost way too much… That was me. I had lost my sense of peace and happiness. I had lost my health.”

Although the marriage had to come to an end, Thusani learnt some valuable lessons. The first, to really listen and not be ‘love blind’ to possible red flags. The second, not to think that you can convince him to change. If he is a feeder, he will want you big.

READ MORE: 8 Signs He Isn’t Actually A Nice Guy After All

Picking Herself Up Again… 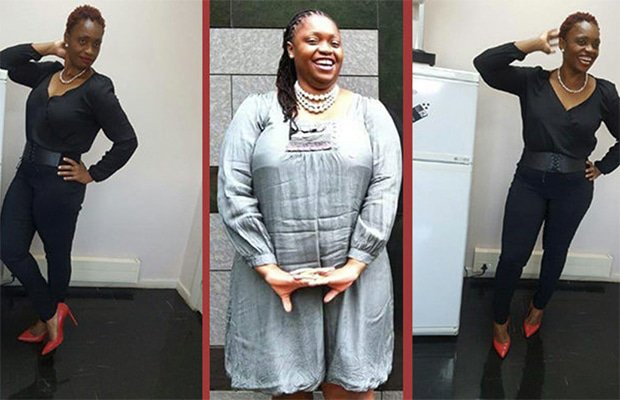 Fifty-seven kilograms lighter, Thusani is rediscovering who she is – and loving it. Not only is she running 20 kays, she’s also training to climb Kilimanjaro later this year. “I decided to challenge myself to complete the Kilimanjaro Climb Expedition this coming July 2018, which I’ll be completing under the Imbumba Foundation, which is affiliated to the Nelson Mandela Foundation.  I’m aiming to raise R500 000 for sanitary towels for underprivileged girls in the Limpopo Province.”

Pick yourself up, start again. What an inspiration.