Exactly How To Talk To Your Doctor About Fertility

Even if you don't think you want kids yet.

In a US WomensHealthMag.com and OprahMag.com survey, less than half of women said that their doctors brought up fertility with them. And Black women, in particular, were more than 50 percent more likely than white women to say they felt uncomfortable talking to their doctors about getting pregnant.

In the survey, 21 percent of Black women reported feeling uncomfortable talking to their doctor about fertility. When asked why, 22 percent said that they didn’t even have a doctor.

While the verdict is still out on if you need a pap smear annually, you should see a gynae once a year for a well-woman’s exam, according to the American College of Obstetricians and Gynecologists, to keep up with diagnostics like regular STD screenings and breast exams. It can also be a time to bring up (or track) any concerning symptoms, like pain during sex or abnormal bleeding, that could signal future fertility problems.

READ MORE: 17 Weird Things That Can Mess With Your Fertility

Whether you’re thinking about having kids now or in the future (or are on the fence about having them at all), now is the best time to share your questions (or ambivalence) with your gynaecologist—even if you’re in your twenties and don’t think it’s an issue that needs to be on your radar yet.

At your next annual check-up, start the conversation by asking: What does my future fertility look like? That’s an important question, particularly for Black women who are more likely to develop uterine fibroids.

“We know that uterine fibroids are very common in all women,” says Dr. Desireé McCarthy-Keith, a reproductive endocrinologist at Shady Grove Fertility in Atlanta, Georgia. “But Black women are more likely to have multi-fibroids or big fibroids—and we know that fibroids can affect fertility.”

According to the American College of Obstetricians and Gynecologists, if you’ve had unprotected sex for at least 12 straight months with no luck getting pregnant and you’re under 35 years old, it’s time to see a fertility doctor.

If you’re 35 or older, try for six months, then seek help. Many fertility specialists don’t require a referral, so you may not need your primary care doc’s approval to move forward. (Be sure to confirm this is the case with your insurance provider first, though.)

READ MORE: Here’s What You Need To Know About IVF And If It’s Right For You

STEP 4: Push For The Right Tests

Eyvazzadeh created a simple acronym (T-U-S-H-Y) for all the steps you should require a doctor to take when checking your fertility. “It doesn’t matter who you are, what your socioeconomic status is, your education level, your ethnicity—these tests are for anyone curious about their fertility,” says Eyvazzadeh.

“Hopefully this method also decreases the number of the emotional ups and downs that women go through when they have a treatment that doesn’t work. That’s what I want to avoid.”

Though some of these tests may be expensive, Eyvazzadeh stresses that it’s important to get the full picture of what’s going on—both with you and your partner. If multiple factors are affecting your fertility, the sooner you know, the better you’ll be able to assess which solutions may work and which won’t. Here’s what to ask for: 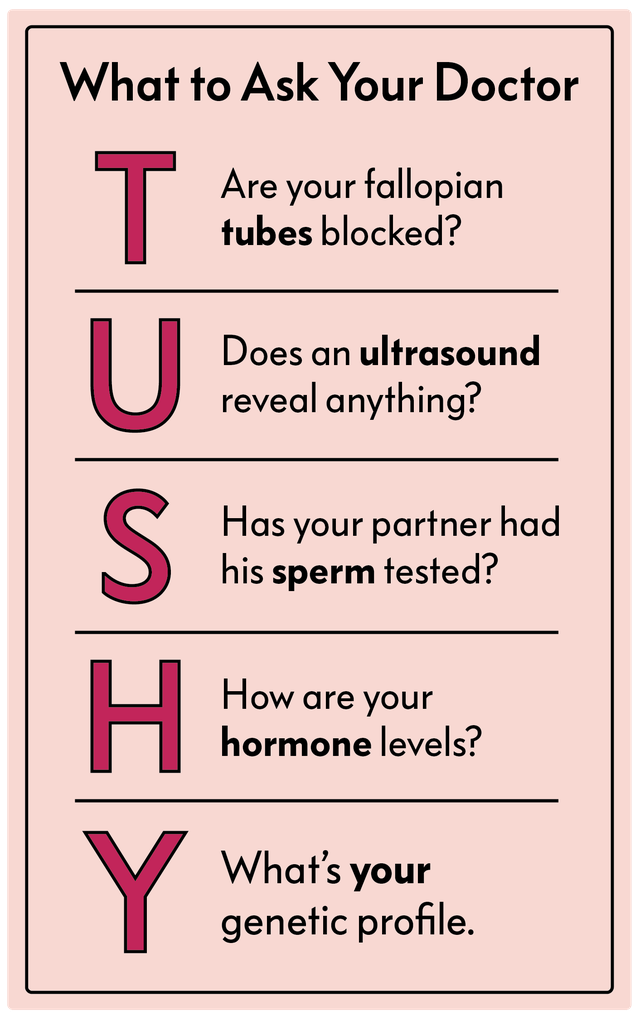 STEP 5: Get A Second (Or Third) Opinion If Necessary

“M.D. doesn’t mean medical deity,” says Eyvazzadeh. “We’re not god, so if you feel like someone isn’t listening, you are allowed to get as many opinions as you feel you need. And sometimes it takes two or three opinions to finally feel heard.” If the first doctor doesn’t feel like the right fit, head back to the database in step three, or crowd-source close friends for referrals.