Running Helped Me Through Cancer

While going through chemotherapy, Nancy Labuscagne was inspired to start running. Her amazing story will make you want to join her

In 2008 I started my articles in accounting. This was a big deal for me as I felt independent and professional. I used to sit at my desk and wonder where those people got their energy. They stayed focused throughout the day while I was battling to keep my eyes open.

Back then I was also in a netball club playing friendly games to stay fit. Again it felt like I was playing against Duracell bunnies. I bumped my shin during a game and it didn’t want to heal as it should. I thought it would be a very quick visit to the doctor, but surprisingly the doctor did blood tests. The next day at the office I received a call from the doctor with appointments to see an… oncologist? And something about suspecting…CML? Ignorant of medical terms I googled the words “oncologist” and “CML”. I completely froze. This was what appeared on my screen: 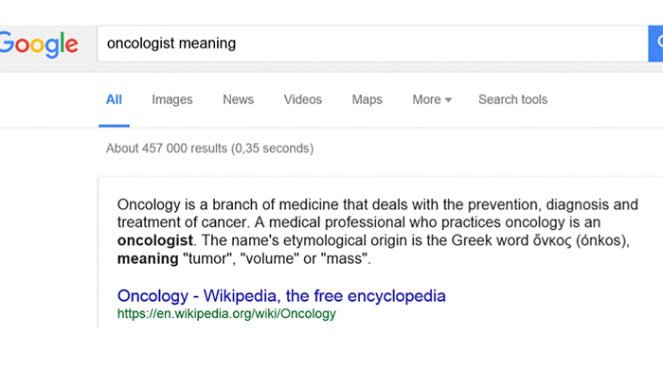 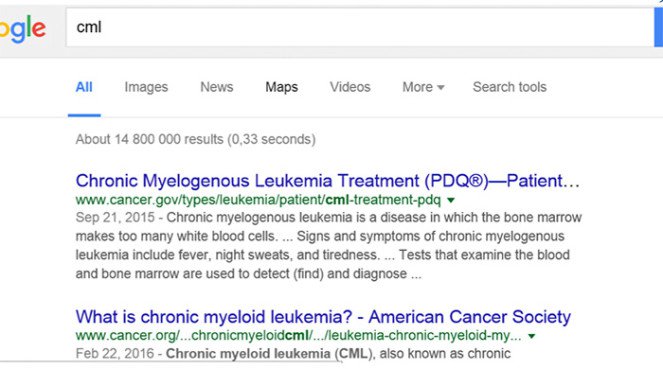 You can imagine the fear, anxiety, doubt and all passing through my mind. After a very painful bone marrow extraction, I was diagnosed with Leukaemia (CML) in 2008 at the very young age of 24. CML was a dark cloud in my life, but my silver lining was a clinical trial proposed by my oncologist. This new drug was in tablet form and my body reacted positively to the treatment, although during the first six months I was unable to work, feeling sick while my body was adapting and my blood counts normalising.

Don’t Give Up On Your Dreams

Through the whole rigmarole I was dating a very handsome man and obviously one of my fears was that he would not be willing to face this reality, not knowing what will happen in the future. He is three years younger than me and was only 21 at that stage. But I received incredible support from him and his family and our relationship grew so much more because of all we went through. He eventually proposed and we got married 2010. 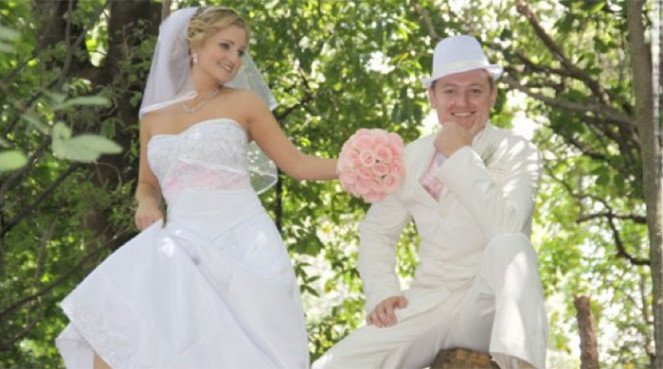 I had the burning desire to become a mother, but a huge burden on my shoulders was the realisation that it would be very risky to stop and delay the treatment. Fortunately my oncologist advised that my health was stable enough to step into the unknown of trying to fall pregnant.  After trying for a year and a half with the odds against me, I finally fell pregnant.

The oncologist changed my medication to a “safer” drug. Don’t be fooled…chemotherapy is not safe. Not even in the tablet form. The medication had side effects that caused my fever to spike at 40 degrees Celsius. Our child’s heart stopped beating at 12 weeks into the pregnancy – the fever was just too high for the poor embryo to handle. Experiencing a miscarriage was so painful that I hated it when people were talking about pregnancy or were pregnant in my presence.

Our oncologist felt truly sorry for us but with a slight “I told you so”  attitude. Nevertheless, my husband and I decided to trust in the Lord, keep positive and live in faith. We tried to fall pregnant again, this time without any treatment what so ever. We fell pregnant within seven months and all went well. Lee-Ann was born in Feb 2013. Our miracle baby girl. 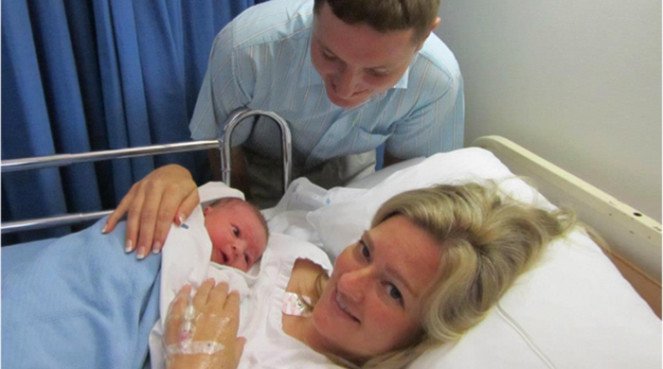 Inexplicably, only at the very end of my pregnancy with Lee-Ann, did my blood tests indicate that my body needed cancer treatment again.

Back To Square One

After having a baby I was really at my worst ever physically. I weighed more than I ever had before, but I spend about a year just focusing on caring for and enjoying our blessing: Lee-Ann.

I finally got the courage to start with some exercise and dieting again. I joined the gym and started eating healthily. Not knowing that this type of cancer loves protein, my choice of diet was high protein, low carbs.

Two months later I discovered an abnormally swollen gland in my neck and immediately went to the doctor for a check-up. They sent me for a biopsy and then a terrifying call again from the receptionist telling me the doctor wanted to see me urgently. I’d never wish that feeling on anyone. You just know it’s going to be bad news.

I went to the doctor’s office with my husband and child, but they had to sit in the waiting room so I had to face the news alone. It was 2014. I was diagnosed with yet another cancer: Lymphoma (Hodgkin’s disease). 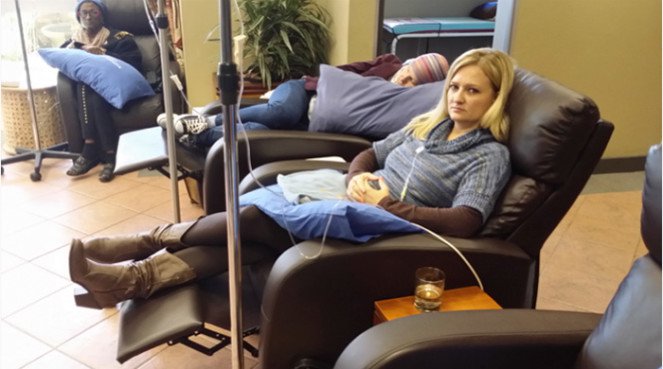 This time I was not that lucky and had to get chemotherapy the old fashioned way, via the blood stream. It came with the whole package – sick to my stomach after every session (there were 12 sessions of chemo over six months), lost all my hair and some toe nails. But at least my skin was flawless! 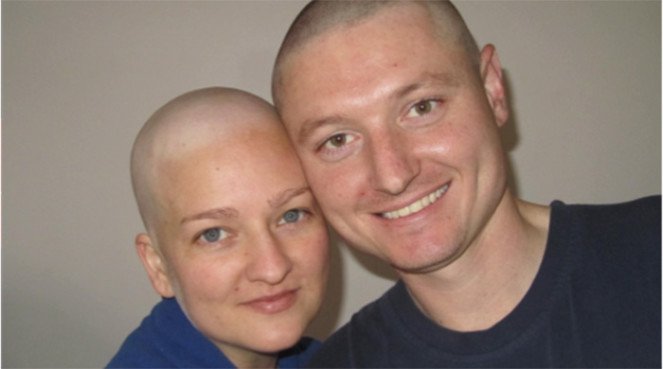 This chemo therapy is one of the strongest you can get and for this reason the doctor recommended a port – a little chamber or box put under the skin of the chest during a small operation. The little box is attached to the central line tube inside your body, the tube goes directly into a blood vessel. So there is no tube coming out of your chest. A special needle is pushed through the skin into the port to administer the chemotherapy. It was the best option for me as I would not feel the chemo burning the vein. 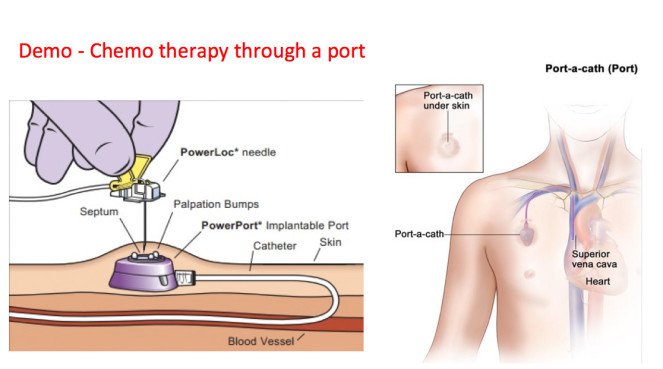 Why I Started Running

During my second week of chemotherapy we went to Cape Town for a break. At this stage you don’t feel so sick yet; it’s only by chemo number four that things start to get tough. We went up Table Mountain with the cable cars and I could see people actually climbing the mountain. I told my husband, next year on our trip to Cape Town I will climb Table Mountain.

But when you feel so sick to your stomach, you never really want to think about any kind of exercise, let alone doing it. During my chemotherapy I tried my best to set several goals to keep myself motivated. To climb Table Mountain was goal number one.

While sitting on our porch one day enjoying nature, I saw people passing my house sweating from a nice run in the neighbourhood. I didn’t feel like running at the time but I was craving the feeling of my heart beating fast and sweat running from my face and just feeling amazingly healthy with a clear mind.

There and then I made a deal with my mother in law sitting next to me: When I am done with chemo in November 2014 I will start running and do my first five-kay run in 2015. She agreed to join me as support even though she’d never tried running before and was 55 years old at the time. This was my second motivation.

A Second Chance At Life

Before I knew it the chemo was done, I was in remission and now that I had another chance I just wanted to start living life.  Slowly but surely I regained my strength and started training for that five-kay in 2015. I started off by just walking for five minutes till I could at least jog three kilometres.

A dream became a reality. I did my first five-kay race at TUKS in Feb 2015 with my mother in law, husband and many more. This was just such an achievement for me and made me set more running goals. 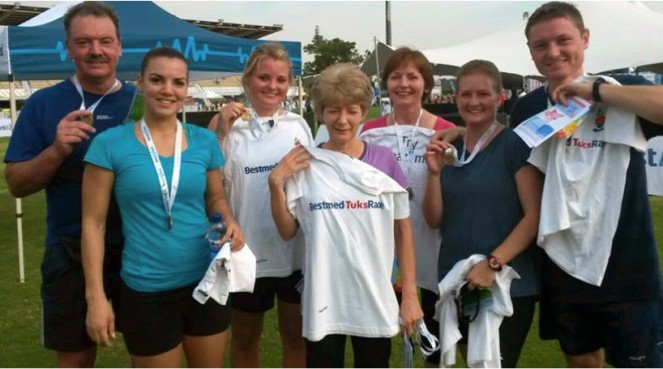 Figuratively I could feel my whole body, every cell clapping hands, enjoying the oxygen in my blood. Cancer cells hate oxygen and after this run the oxygen was like ice-cream to my cells. The five-kay race made me realise that this was only the beginning of an incredible journey of running. We did the local five or 10km races every possible weekend, enjoying the early morning run with hundreds of others. Annoyingly we had to purchase a temporary licence before every race as we weren’t members of a club. We searched for the appropriate club and decided on Discovery’s Team Vitality as their benefits of living healthily made running a win-win situation for us. People always tent to use their children as excuses not to be able to run Saturday mornings, but we decided nothing would stop us and got Lee-Ann a running pram. The constant battle in my mind from the cancer I survived and the leukaemia I still fight, tend to get you depressed sometimes. Keeping your mind busy with these kinds of things is vital. 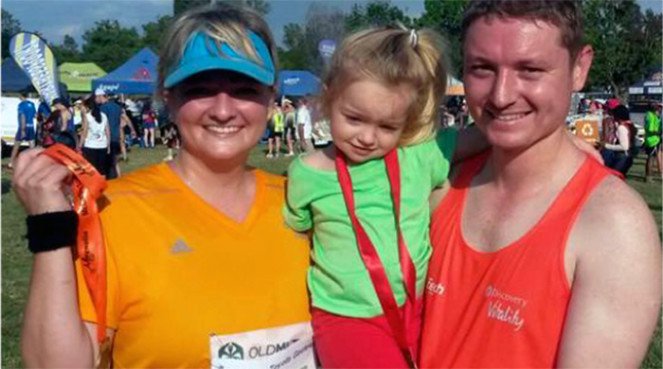 I realised my first goal in April 2015 when I had the privilege of climbing Table Mountain via the “India Window”.  Being in Cape Town the vibe was still there from all the people running the Two Oceans and yes, you guessed it, yet another goal. We ran the Two Oceans half marathon in March this year. 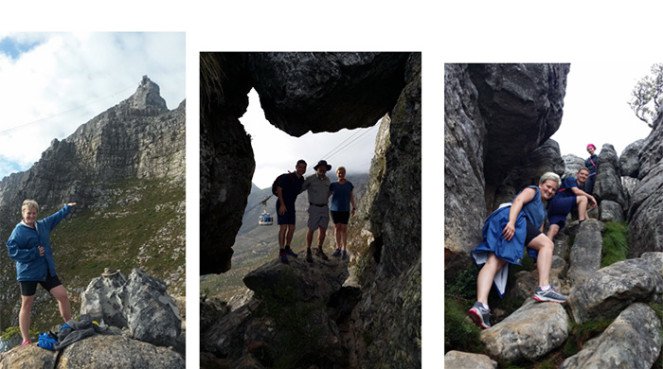 Today the Lymphoma is still in remission and I am fighting the leukaemia, but I feel healthier than ever before. Running allows me to eat the food I like, just keeping a healthy balance . It also helps to clear my mind as I’m exercising now, not to overcome battles, but rather filled with pure joy and happiness because I’m blessed to be able to run.

For some, exercise may seem intense and a huge mental hurdle, but take it slowly – just put on your shoes and walk. Set realistic goals but always set goals. You never know, you might just be running past someone’s house and they’ll be sitting on their front porch thinking, wow if only I was as motivated and healthy as she is. Run, run and run again.

*Nancy is a member of Team Vitality, a running and cycling club that gives members some fantastic perks. This is reprinted from a speech she gave at their 2016 Women’s Workshop. You can join Team Vitality by clicking here.