Olivia Munn On Training — For Roles, To Meditate, And For Standing Up For What’s Right

“As much as I care about looking and feeling my best, it’s not enough of a motivation for me. I need a goal of accomplishing something.”

Or maybe heated is a better word. For a little over two hours, the 39-year-old actress and I have been chatting while she feeds her small dog, Frankie, organic peanut butter from a tiny spoon, in a hotel lobby in Norfolk, Virginia, where she’s wrapping up the filming of a movie.

It happens quickly, this transformation from banana-toast-eating starlet to passionate activist. Her tone changes, her posture straightens, and she appears lit from within.

She wants the rest of Hollywood to realize that merely repeating “Time’s up” isn’t enough. She wants people to actually listen to those who’ve made accusations and suffered hardships.

“It’s infuriating. We can’t tell stories about people and then not care about them,” she says, reflecting on the current reckoning in her industry. “You can pretend to be a real-life hero in movies and TV shows and on Instagram, but the real advocates are the ones who stand beside the people who make a difference in the world.” 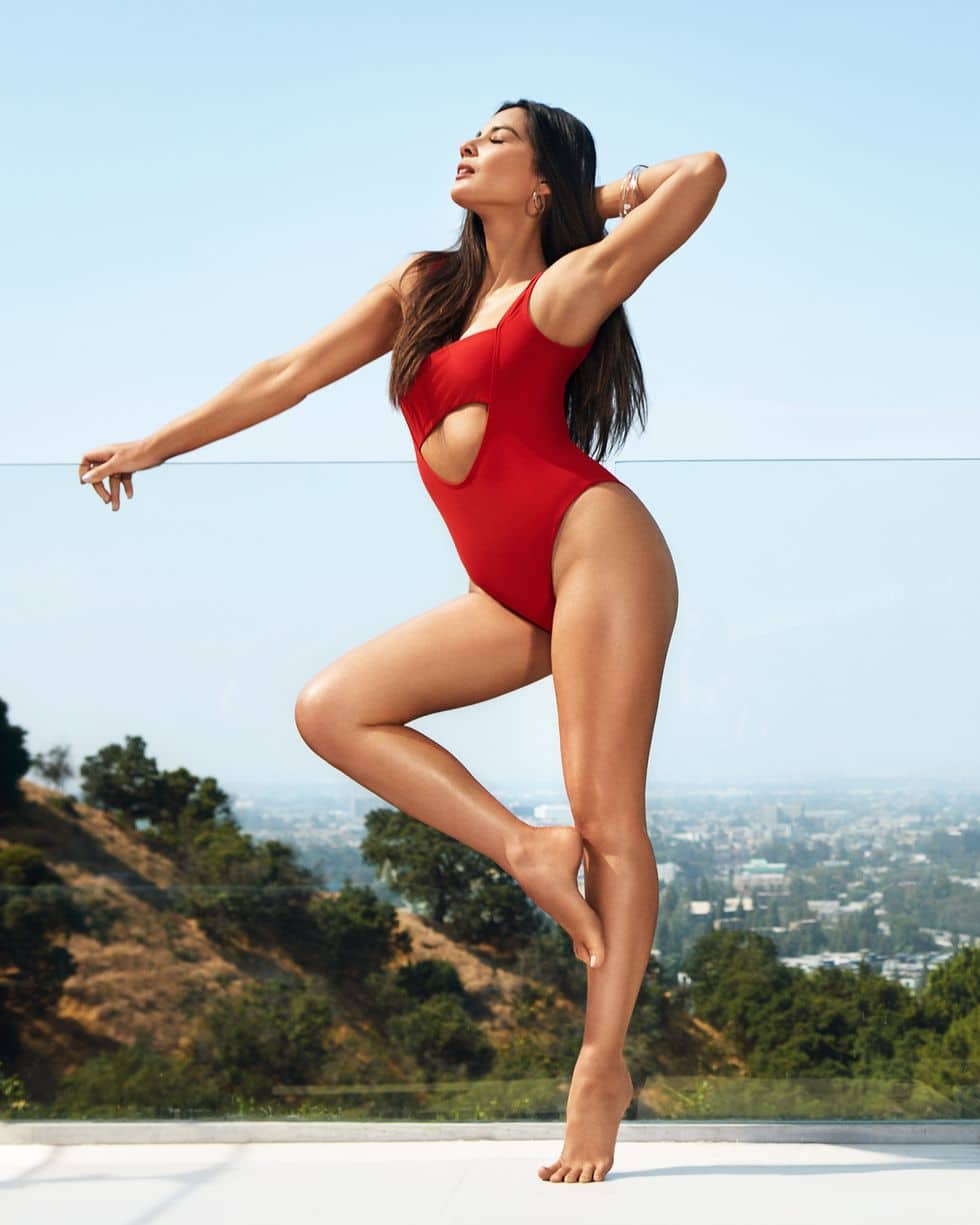 Olivia happens to be both kinds of hero. She played telekinetic warrior Psylocke in 2016’s X-Men: Apocalypse, and in real life, she’s had to be what she calls a “silence breaker.”

In 2017, she joined five other women in bringing accusations of sexual harassment and assault against director Brett Ratner. Then in 2018 she discovered one of her scenes in The Predator had featured an actor who was a registered sex offender and reported it to the studio. She was the one left to answer media questions about the decision to cut the scene.

The past two turbulent years have left their mark on Olivia’s health. She turns her phone over and offers proof: photos of an allover body rash, a video of a biopsy, the scar that remains from doctors’ poking, prodding, testing. Lupus, they thought, but in the end, they were wrong. The rash, she says, was the physical manifestation of pent-up angst bubbling to the surface.

“One of the things that stresses me out more than anything,” she says, shaking her head, “is how do we do right by [the silence breakers]?” 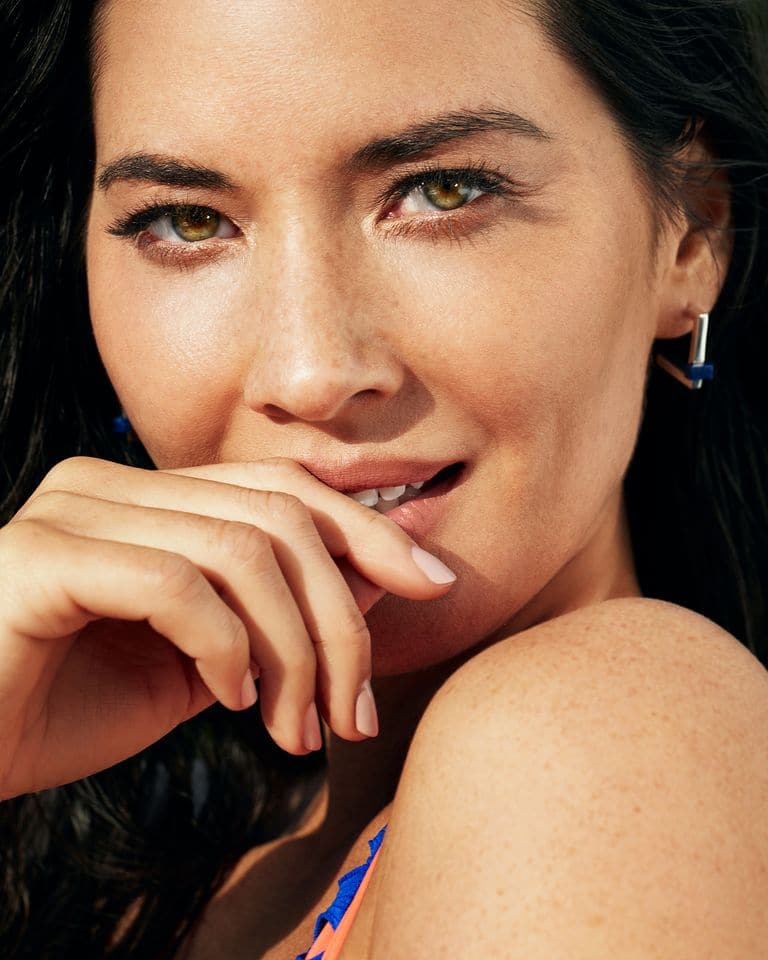 It’s a question she constantly wrestles with, but to do as much as she can, Olivia knows she has to take care of herself—that she cannot do her best work on-screen, on-set, and in the world if she’s unhealthy.

And she’s putting that ethos to the test, thanks to an ever-growing to-do list: She has a new show, The Rook, a supernatural series, airing on Starz. She is filming two movies and has two more in preproduction. On top of that, she’s developing TV projects.

It’s enough to make even the most Zenned-out yoga master a little frazzled. For Olivia, self-care starts with the most basic step: breathing. “I tried so hard [to meditate] for years,” she says. “The tough thing for me about meditating is thinking, Am I doing it right? Did I do this for nothing? Do I have to start all over? My brain begins to spin.”

Then she found something that worked for her: a headband called Muse that uses an EEG device to sense brain activity and translate it into guided meditation sounds. “When you’re thinking of nothing at all, you get bird chirps,” she says. “It’s like a little video game for me.”

It’s taken years of work, but now she can get to that calm place in 10 seconds. In those quiet moments, she finds it easy to focus on what she needs to do. And that often manifests in the form of her mom’s voice saying, “Stand up for yourself. Stand up for what’s right. You know what’s right—do it.” 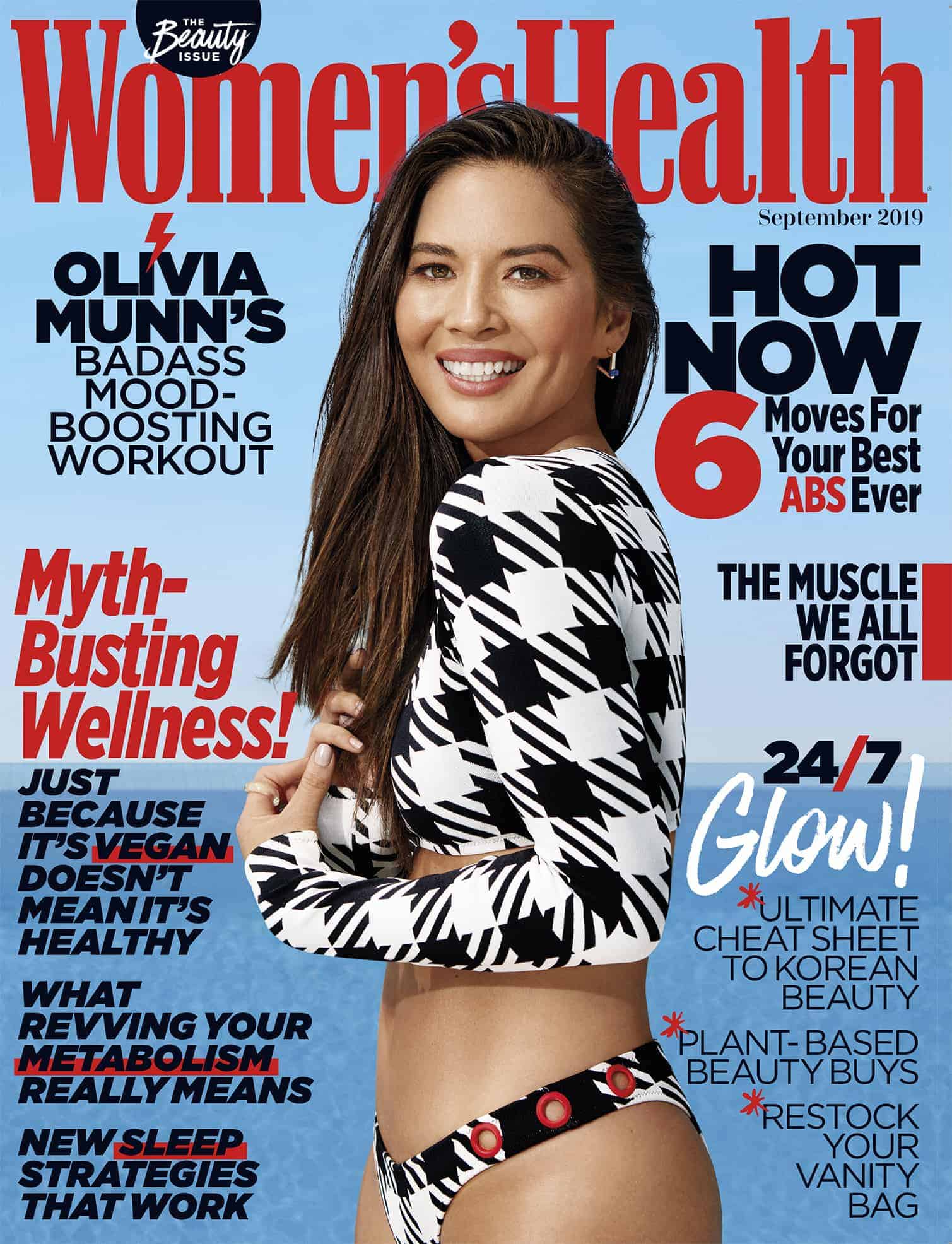 Olivia and her mom moved to Japan from Utah in 1986, after her parents divorced and her mother remarried. Olivia’s stepfather at the time was in the Air Force, and they were stationed just outside Tokyo for most of Olivia’s childhood. She and her siblings were encouraged to train in tae kwon do, the practice that first taught her the power of melding mind and body.

After a decade-long break, Olivia found martial arts again in 2015, while training for X-Men —her stunt double had never done fight sequences, so Olivia did them herself. She met a trainer, Karine Lemieux at Dax Gym in Montreal, who helped her get fight-ready.

Olivia trained for six hours a day and ate an 80 percent raw diet (fewer complex carbs, little meat, lots of fruits and veggies). She fell back in love with tae kwon do, and though her schedule in recent months has been too full, she’s starting it again soon. And she’s excited to return to the eating style too. She looks forward to the smoothies: just bananas, strawberries, and almond milk.

“As much as I care about looking and feeling my best, it’s not enough of a motivation for me,” Olivia says. “I need a goal of accomplishing something.”

Her next challenge? A friend’s birthday weekend, where they’ll compete in teams. (Olivia is especially keen on winning the kayak race.) While she doesn’t think of herself as competitive, she’s heard that she is too many times to trust her own judgment. “I don’t mind losing, but I’d hate not trying my best,” she says.

To that end, she’s planning to ramp her tae kwon do routine back up. She demonstrates a few of her favourite moves in the hotel lobby. Beginning with active stretching, she swings her leg in a circle out and around and back. She’s wearing wedge sneakers, Adidas track pants, a UPenn hoodie, and dog Frankie in a crossbody bag on her chest. Frankie looks up at her as she explains the rest of her routine: 30 minutes of shadow boxing and kicking, 15 minutes of abs, then stretching.

“When you do martial arts, it makes you feel like you’re physically capable of anything,” she says. “And the great side effect is that when you’re in your best shape, you actually will look your best too.”

Olivia doesn’t limit her wellness practice to just meditation and tae kwon do. At her home in Hollywood—which she renovated to be fluoride-free, chlorine-free, lead-free, and alkaline—she has a closet dedicated to alternative treatments. She owns something called a biomat, which uses infrared-heated amethyst crystals to promote healing. She also has tools for doing gua sha, an ancient Chinese healing technique of scraping the skin to improve circulation. There are magnets for magnet therapy and aluminium machine-cut tuning forks too.

This is how she stays balanced, her literal and metaphorical tool kit for survival. For Olivia, being healthy and fit means not ignoring the bad in the world for your own comfort. It means taking care of yourself so that you can lose sleep over the things you believe in. She hasn’t been scared to speak out before, and she won’t be in the future. It’s worth more to her than anything else.

As she enters a season jam-packed with projects, Olivia is focused on regaining her strength. She’s going to kick-start her martial arts training and readopt her preferred way of eating. She needs the energy those choices provide because she has high hopes and big plans. No doubt she’ll make a serious splash.

This article originally appeared in the September 2019 issue of Women’s Health South Africa and on www.womenshealthmag.com