Toyota Fortuner 4×4 Challenge: Here’s Exactly What It Took To Win The Prize

After months of build-up and anticipation, the finalists in the Toyota Fortuner 4×4 Challenge were put to the ultimate test…

But first, what exactly is the Toyota Fortuner 4×4 Challenge?

Four participants (chosen by the four media partners: Media 24, Highbury Media, Independent Media and Tiso Blackstar) teamed up with four celebs (heroes in “challenge” speak), to compete in a range of super-tough tasks. The grand prize? A Toyota Fortuner 2.4 GD-6 4×4 6AT!

The 2019 event marked the fourth instalment, incorporating elements from previous years as well as all-new challenges. This year’s iteration required a combination of mental and physical fitness skills. And thanks to the sponsors — Garmin, Specialized and returning sponsor Salomon — who provided the necessary gear, the contestants were ready for battle.

How the Challenge went down

The contestant-heroes were paired at Pezula by drawing colour-matching ping-pong balls, and the teams were announced:

Cool, wet conditions added an extra challenge to each of the competitive tasks. Ouch!

The first challenge — aptly named the Garmin Lifesaving Flags Eliminator — involved a lifeguarding-inspired beach sprint elimination – knockout fashion – on the shores of Leisure Isle. The last one standing received a starting advantage in the lagoon paddling challenge. Trevor Lagerwey earned the advantage and, paired with Olympic rower Kirsten McCann, the team made light work of the cold Knysna lagoon, earning first place in Round One.

The second task — the Pezula Night Duathlon at the Pezula Hotel — was a sprint run involving navigational instructions from the teams’ Garmin Fenix 6 Plus Smartwatches. After the run, they were tasked with identifying 15 African countries on a map placed on the bonnet of their Toyota Fortuners. How to make it harder? Just add rain.

Day Two brought with it five competitive tasks, kicking off with the Salomon Trail Run along the cliff paths of Cairnbrogie on the outskirts of Plettenberg Bay. After the run, the teams had to answer a Fortuner-related brainteaser and hit the horn to lock-in their time. Meyer and De Villiers put on quite the show, clawing back valuable time.

Next up? The Specialized Epic Pump Track Challenge. Think state-of-the-art Specialized mountain bikes and a hardcore pump track. While the contestants pedalled furiously, their hero partners had to call out navigational instructions from the viewing deck.

And then? Enlisting navigational, endurance and level-headed thinking, the Toyota Obstacle Challenge required teams to find key raft-building components using their Garmin Fenix 6 watches to find pre-determined coordinates. After gathering all the elements, they had to assemble a raft (capable of transporting them across the dam) and make their way to the check-point. Strong, head-on winds made paddling an almost impossible chore. In the end only two teams — De Villiers/Meyer and Lagerwey/McDonald — reached the check-point. The remaining two teams got DNFs.

The Toyota Blind Drive Challenge added a vehicle-focused element to the mix. Blindfolded contestants had to navigate an obstacle course behind the wheel of their Fortuner. How? Their partner’s instructions guided them. This required a balance of speed and precision, as the task also came with a penalty system. But after many anxious moments, all four teams (and their Fortuners) emerged unscathed. Although the individual results and leaderboard is not disclosed, Dieter Pey and Oupa Mahoje made quick work of the maze, undoubtedly earning the pairing some well-deserved points.

The final challenge saw a shift in gears to clay pigeon shooting, and the Garmin Xero S1 Trapshooting Trainer evaluated each of the eight shooters’ accuracy and score. With the wind buffeting, temperatures dropping and grey clouds looming, it was the contestants’ time to shine. The teams put in valiant efforts. 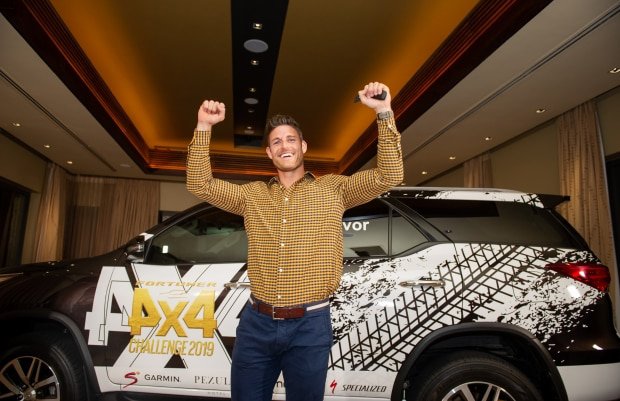 After two days of duking it out, Cape Town-based Trevor Lagerwey (who entered via Men’s Health magazine and was teamed up with Olympic rower Kirsten McCann) was crowned Fortuner 4×4 Challenge champion for 2019. Strong teamwork and consistency earned him the keys to a brand new Toyota Fortuner 2.4 GD-6 4×4 6AT.

But the three runners-up didn’t leave empty-handed! All the contestants received a Specialized Epic Comp mountain bike and cycling gear, Garmin Fenix 6 Plus smartwatch and Salomon apparel to the value of over R60 000.

Thanks to the event sponsors and partners, this year’s challenge proved to be another hugely successful one.