This dessert looks as if it could have been picked up at a patisserie in Paris, but once the components are made, it’s really as easy as… pie. Usually a ganache is made with chocolate and cream, but this one uses coffee instead. 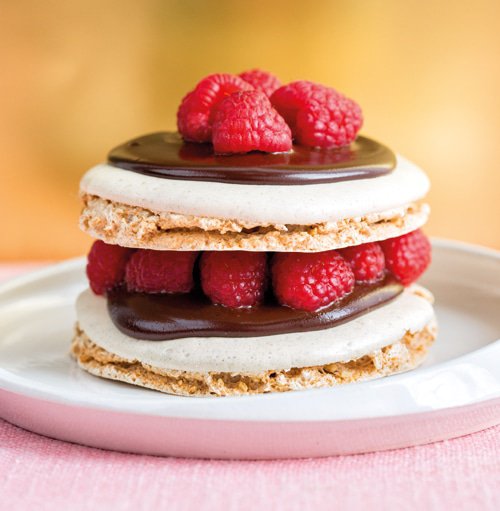 Method
1/ For the meringues, preheat the oven to 120°C. Line a baking sheet with baking paper and draw eight circles (seven centimetres in diameter) on the paper.
2/ Beat the egg whites in a clean, dry bowl until stiff peaks form when the beaters are lifted.
3/ While beating, add the icing sugar slowly, one tablespoon at a time, until incorporated. Then beat for five minutes until the mixture looks thick and glossy. Add the cinnamon and cornflour and beat again, then beat in the hazelnuts.
4/ Divide the meringue mixture evenly between the eight circle outlines and smooth the tops. Bake for 30 minutes, then turn off the oven and bake for another 30 minutes.
5/ For the raspberries, heat the sherry and sugar in a small pot, stirring until the sugar is dissolved. Bring to the boil, let it bubble briefly, then remove from the heat. Add the raspberries and toss to coat well. Set aside.