“I think all the crying made it better.”

There’s just something about an ending—of a movie, of a vacation, and especially of a relationship—that suddenly makes everything feel so meaningful. And when it comes to emotional impact, there’s no ending like a breakup.

Will this be the last time you kiss? The last time you hold each other? The last time anything will ever be this pure, this good again ever? Okay so things will get better (we promise!), but in the moment it feels so intense and sometimes that intensity leads to… super-hot sex?

Well, at least that’s what these women discovered. Check out their steamy breakup-sex stories below: 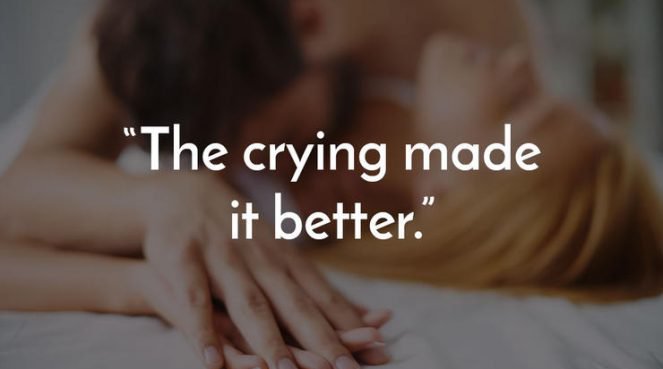 “My ex told me he loved me and was sure I was ‘the one,’ and then dumped me. Yes, all in the same breath. We were young and he basically said that we are meant to be together but needed to get some life experience apart from each other first, and that if it really is meant to be then it will work out. I was heartbroken. I tried to argue with him about it by pointing out all the good things we had going. Finally, I just started crying. Then he started crying. Then he hugged me. And one thing led to another until we were having sex ‘one last time’ to end things on a good note. And I gotta say it was really good sex. I think all the crying made it better? Although it’s been two years and I haven’t heard anything from him so that whole meant-to-be thing, yeah, probably not.” —Jen F.

READ MORE: 5 Major ‘Relationship Saves’ After Your Partner’s Had An Affair 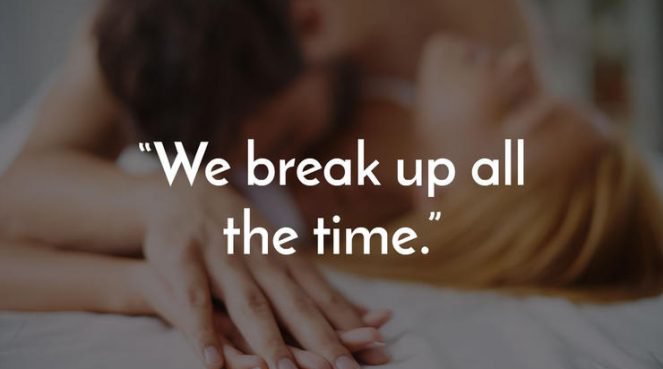 “My boyfriend and I fight all the time. My friends have told me our relationship is ‘toxic’ but I think it may just be the way we are. We’re both really passionate people with big opinions and that leads to a lot of blow-ups. But it also leads to a lot of make-ups. We’ve broken up more times than I can count but we’ve discovered that our breakup sex is the best, even better than make-up sex (which is also pretty amazing). Saying this out loud I’m beginning to see maybe why we fight so much!” —Lissa S.

READ MORE: Heads-Up — 3 Signs That One Of You Is An Emotional Cheater 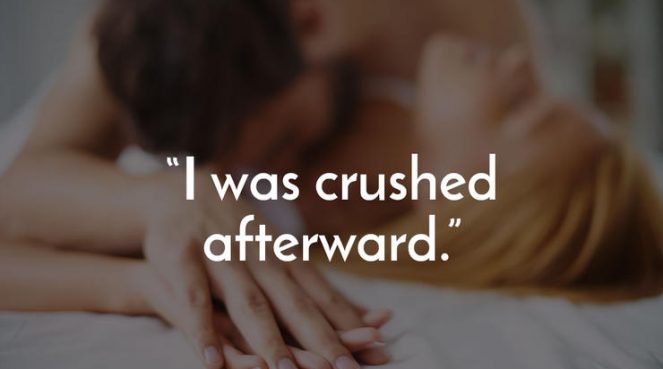 “My ex and I got divorced last year after 10 years of marriage. It was hands-down the hardest thing I’ve ever been through. One night, about three months after the divorce was final, I called him. Partly out of habit and partly because I was lonely. Even though we were divorced, I still loved him on some level and wanted to stay friends with him. Well, he could tell I was upset and invited me over. I stayed the night and it was probably the best sex we’ve ever had. Unfortunately, I was crushed the next morning when we realised that it really didn’t change anything and our situation still sucked. Since then he’s asked me a few more times to ‘come over and talk’ but I always turn him down. Our relationship is too complicated as it is, and I need to focus on moving on.” —Veronica P. 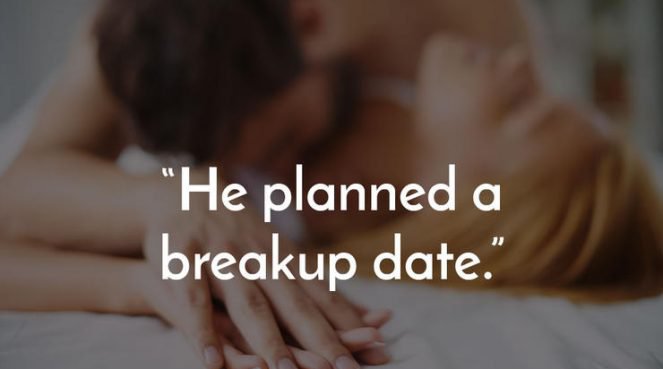 “I met my boyfriend when I was 13 and he was 15. Our relationship was intense from the beginning and we were both each other’s ‘first.’ Fast forward through high school and he left for college before my junior year. We knew the stress of a long-distance relationship would be tough so we decided to take a break for awhile. The night before he left, he planned this huge romantic date. He called it our breakup date. He took me on a tour of all of ‘our’ spots, we had dinner at the place we had our first date, and we ended at a nice hotel. It was all really sweet, and I loved every minute of it. But looking back I almost wish we hadn’t had sex that night. It just made the next day that much harder. And then when he inevitably got a girlfriend at school, those memories made the news more painful. But still, that night was pretty amazing. And, if I’m being honest, I still compare new dates to him, he’s the gold standard in my mind.” —Kelly C. 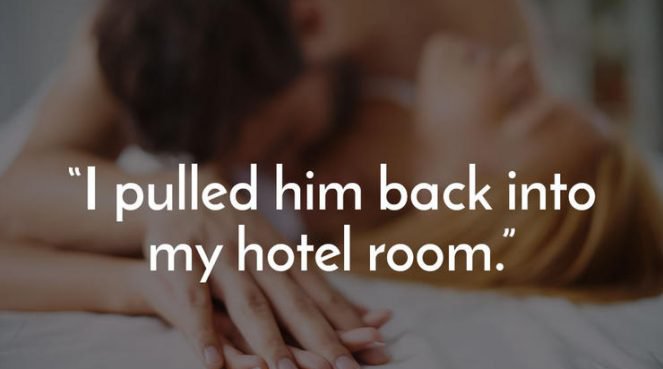 “I had an affair with my married boss. I’m not proud of it but it happened. After a few months, the thrill of sneaking around wore off, and I began to want to be more than just a side piece. He didn’t want anything more so we broke up. All in all it went really well, hardly any awkwardness at the office, no bad feelings. It was fine. A year later we ended up going to a business conference together. You would have thought those three days were our honeymoon. But after the conference was done he told me we were done too, again. There was something so poignant about the moment that I pulled him back into the hotel room. I figured if this time really was the last then I’d give him something to remember me by!” —Angela H.

Looking for more? Here are six serious mistakes you could be making during sex.