This woman has THE BEST trick.

One of the first texts I sent to my (now) husband was a lie.

When we first met on a beach seven years ago, I was living outside of Philadelphia and he was living in Boston. I knew getting together again would be tough, so a few days later, I sent him a text: I’m going to be in Boston for the weekend in three weeks if you want to get together. Thing is, I had no plans to be in Boston that weekend, but I wanted to see if he’d ask me out. He did. We went to a Red Sox game, and that was my last first date.

Now, let’s be real: Even if you’re a grown-ass woman, texting a guy you just met can feel weird. It’s basically the modern-day equivalent of figuring out how to say a pickup line, without it coming off as super-cheesy. Tricky, right?

But there’s a method to the madness. That’s why I asked a bunch of women to share the exact text messages that worked for them—and had Dr. Chloe Carmichael, a psychologist practicing in New York City, explains why these strategies could work for you. 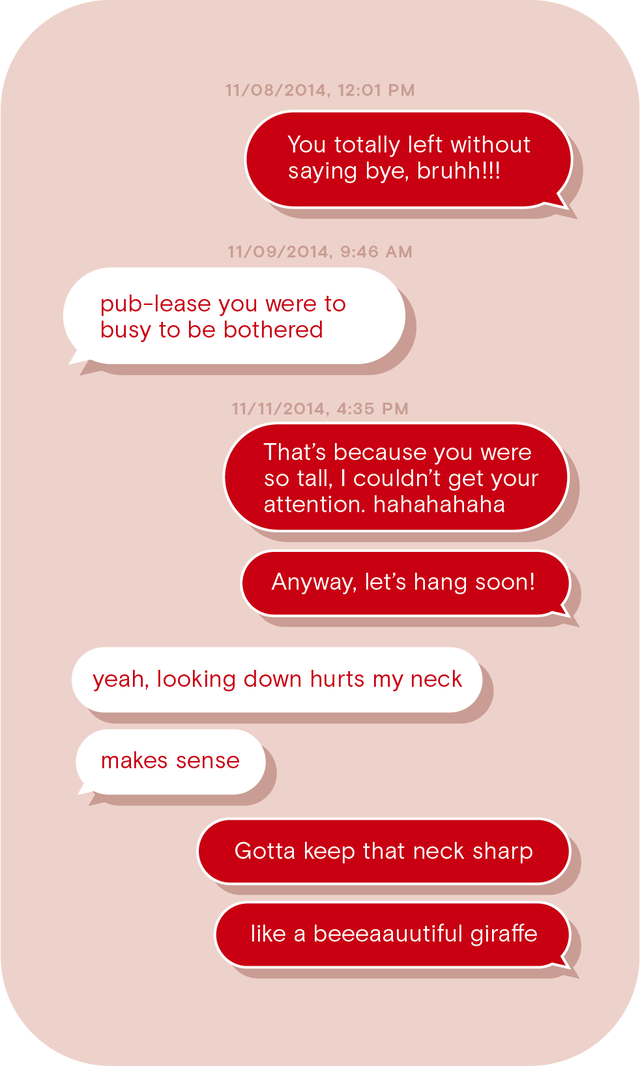 The relationship expert says: “Starting an inside joke and understanding how to gently tease over text is an art—and a nice way to keep things feeling light-hearted. The woman doesn’t necessarily put herself out there too much either. Plus, by being lighthearted you make it easy for someone to have a back and forth with you without feeling overwhelmed or concerned about obligations.”

READ MORE: The Right Way To Take Things Slow In A New Relationship

Put The Pressure On

“The day before I deleted Tinder last year, I matched with a guy and said, ‘Okay, buddy. No pressure, but you’re it. You’re the last match. There’s no Hunger Games war here—you’re the last match I’m doing before I’m deleting this app, so bring me your A-game. We dated for a bit, then broke up for other reasons.” —Jennifer W., 33, Wilmington, NC

The relationship expert says: “Women are often concerned with seeming too available, so this woman emphasised her lack of availability. She’s not going to be standing around waiting.” 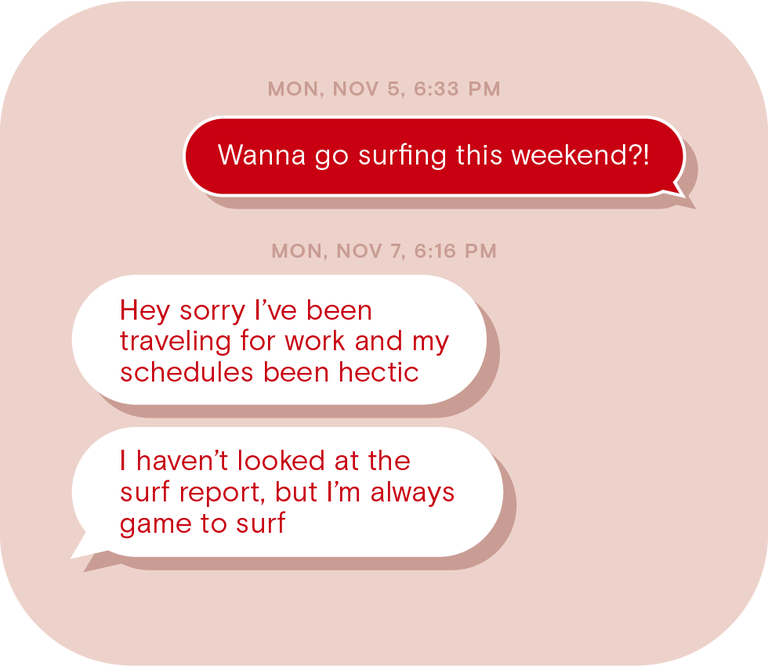 The relationship expert says: “She made it kind of open-ended and vague—and didn’t give away that she’s free 100 percent of the weekend. When women are overly specific, they can get really tied up. I invited him surfing Saturday but he hasn’t replied. Should I leave Saturday open? The fact she put ‘?!’ also conveyed enthusiasm for surfing, putting the emphasis more on the fun the activity—something she might do anyway—as opposed to it all being about getting together with him.”

Use A Pick-Up Line

“I was swiping through Tinder and one guy caught my eye. When we matched, I sent him one simple pick up line: ‘Hey, nice beard’ and I believe a GIF of Abbi from ‘Broad City’ saying, ‘How you doin’?’ He answered almost instantly. We had some friends in common, one of his pictures was from one of my favourite restaurants, and we had plenty to talk about. After a few days of occasional communication, I asked him if he’d like to get drinks with me. We met up and spent the next six or so hours together, drinking, and going to a few different bars. We’ve been together a little over a year and a half, we have a home together, and things are absolutely wonderful.” —Desiree M., 30, Green Bay, WI

The relationship expert says: “If you use a pick-up line, notice how they respond and how quickly they respond. He answered almost instantly, which is a really important part of the story. He showed a great deal of responsiveness, receptiveness, motivation, and desire to continue that connection. I’m guessing that probably helped her feel more comfortable getting together. “ 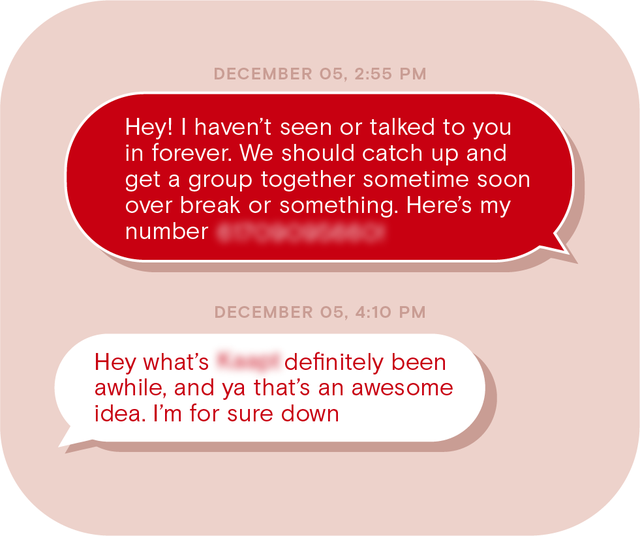 The relationship expert says: “She referenced a group, leaving him to wonder if this was a date. She also emphasised the situational part—meeting up over a break—giving a reason why she has extra time. This makes it clear she’s isn’t deeply fixated on him.”

Or A Double Date 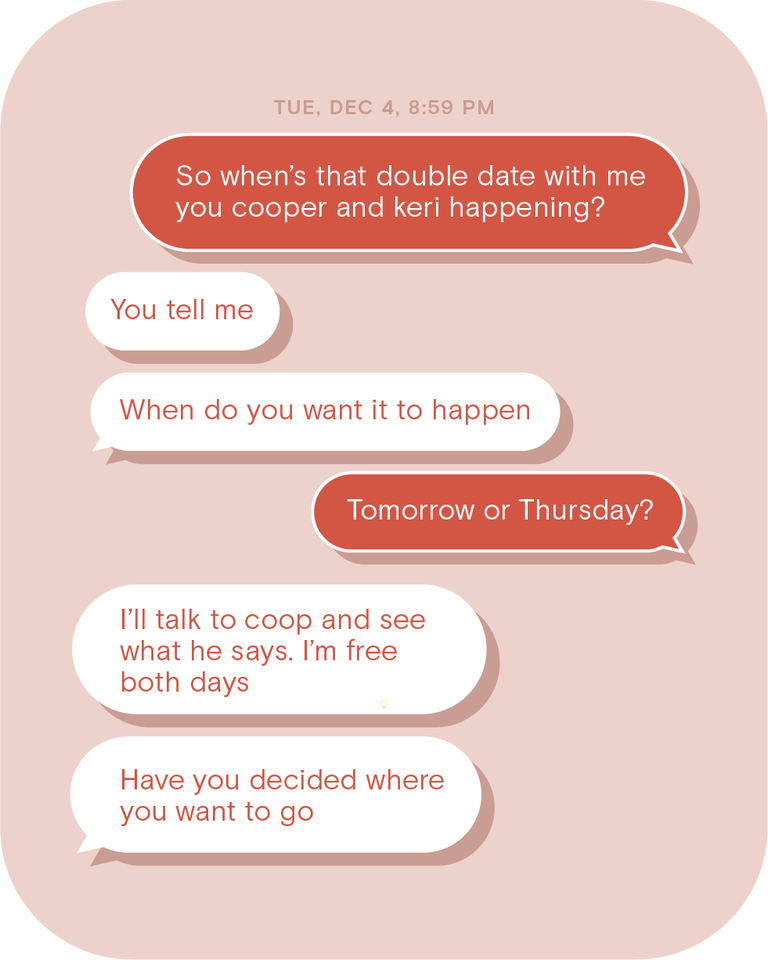 The relationship expert says: “There’s an idea that women are bigger social coordinators—and that’s the role she took on here. She was also direct, which could be a bit of a risk, but at least she’d know where he stands either way.”

READ MORE: The 10 Rules Of Casual Dating Every Woman Should Know

“After talking to my now-fiance most of the night at a bar, I went up to him and asked him if he’d like to get a drink with me sometime, to which he replied, ‘I would love that.’ Since he was too drunk to put my number in his phone, he decided that I should put his number in my phone. The next morning I texted him and said something to the effect of, ‘Since we had such a nice conversation last night, I’m going to bypass the three-day waiting rule and text you.’ He was entertained and glad I did text him. He asked me to get brunch the next day and we’re getting married in May.” —Amanda B., 33, Medford, MA

The relationship expert says: “They clearly had a connection, and when she asked him if he’d like to get a drink, he very affirmatively responded. He even used the word ‘love.’ He didn’t say, Yeah sure I’ll catch you around the bar some time; he said ‘I would love that.’ Then, he decided that she should put her number in his phone. She texted him and she put herself out there in a fun, clear way but she stopped short of asking him out. He was doing his side of putting energy and effort into things and demonstrating a willingness and ability to carry out plans with her.” 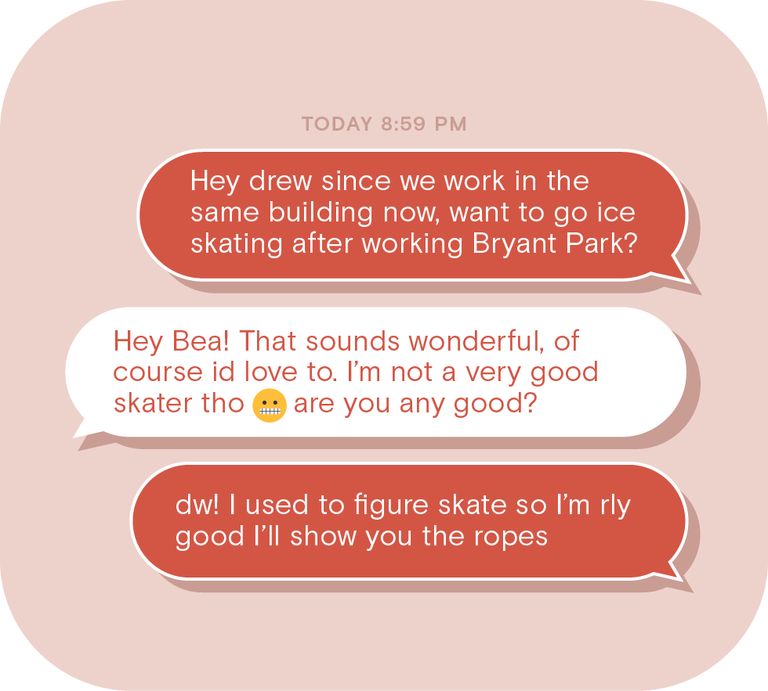 The relationship expert says: “By referencing that they work in the same building she’s kind of diluting the idea that her focus is completely on him, which can be nice especially early in a relationship when you’re trying to figure out dates or how to text him. She’s emphasising the circumstantial part as well as why it might be fun—as opposed to, hey, I’ve been thinking about you all week, want to go skating? She also suggests something that she’s good at, so it’s not so much that she’s got a burning desire specifically to spend time with him.”

READ MORE: 3 Things New Couples Should Always Do, According To The Experts 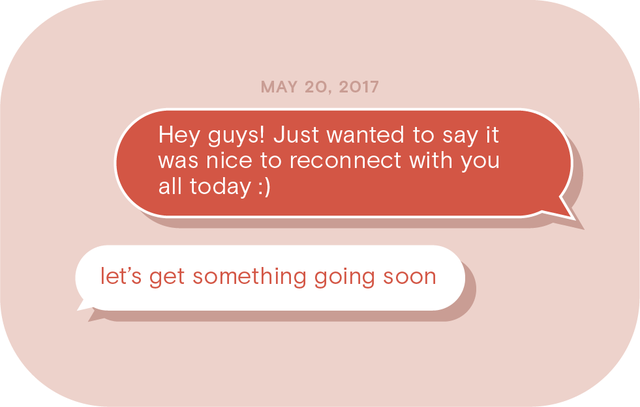 The relationship expert says: “I’m a big fan of this. If you want him to pursue you, create an opening for him to do that. Sending a neutral, friendly text—especially a group text like this one—is almost like being at a party and wearing an attractive outfit that could send social signals that you’re open to being approached. That’s what this message did here.”