That old adage is certainly true when it comes to satisfying sex. Knowing how to fulfil your partner is not only empowering, but good for you too. Plus a great sex life is key to youthful looks, according to a study by the Royal Edinburgh Hospital in Scotland. Researchers attributed this to reductions in stress, greater contentment and better sleep, all of which are also associated with sexual activity. But cracking that secret guy sex code, and tailoring it so you’re completely content too, can be a little trickier than simply bending to his will.

READ MORE: This Is Exactly What Men Notice… When You’re Naked

“The most important elements of being a good lover – to him and yourself – are communication, creativity, self-respect, respect for your partner, true regard for your pleasure and his, and a sense of fun and adventure,” say Jordan LaRousse and Samantha Sade in their book Mastering Your Man From Head To Head. But we know you’re looking for specifics, so we pried more practical information out of a few frank (but still anonymous) guys on the Men’s Health team as well as some Men’s Health readers, then consulted the experts. We’ve also graded the guys propositions based on level of difficulty, so you can decode his illicit wishes, slip them discreetly into your routine and then lie back and reap your own rewards. 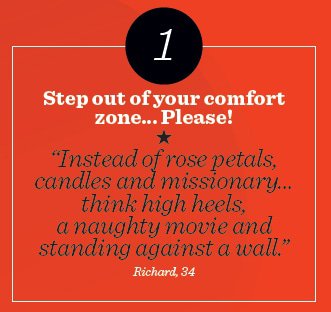 Novelty may be known for its aphrodisiac effects on men, but experts have proved that it works for women too. Yes, quickies are perennially popular with guys, but it’s the spontaneity that gives these brief encounters an irresistible edge, making them memorable for both of you. Losing your inhibitions and shaking up the routine doesn’t necessarily mean whips and chains, multiple positions or having hours to spare… It could just be sex anywhere but the bedroom: on the carpet in the lounge, for instance, or in the car on a road trip; just having to think outside the bedroom can be a fun place to start. And you don’t have to raid the dress-up box to embrace role play either: “Just giving him a passionate kiss as soon as he gets in the door can be surprising,” said one of the guys we interviewed.

READ MORE: “I Got The Orgasm Shot – And This Is What Happened”

Often, the next best thing to actually having mind-blowing sex, in men’s opinions anyway, is thinking about the really great sex they’ve had, so even a naughty SMS can raise a response. “It doesn’t necessarily have to be spontaneous – he just has to think it is!” says sexpert Dr Elna Rudolph of
the Intercare Centre For Sexual Health. “There’s no reason why you can’t plan something sexy and do it when it suits you, but make him think it was spur of the moment.” 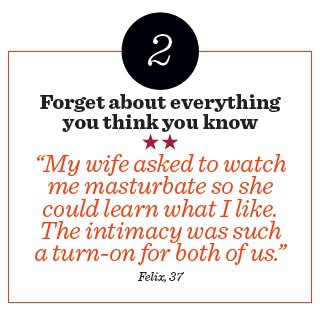 It’s never too late to learn. According to LaRousse and Sade in their book Penis Genius, you should take a tour of his penis: “You can learn all the methods you want, but not every man is going to love everything you do the same way.” It’s time to refine your technique. Just because you’ve done it (blow job, hand job) for years and the result is, er, consistent, doesn’t mean you’re doing it the way he likes it. So why not ask him to show you? The question alone will have him unbuttoning.

“Watching a man stroke himself can be incredibly sexy, and your partner will most likely get a thrill out of demonstrating his dexterity to you,” say LaRousse and Sade, who have a few simple tips to upgrade the humble hand job: don’t start off with repetitive stroking; instead, try a variety of techniques (save the repetitive motions for when you want him to orgasm).

You have two hands for a reason (not just to switch when one gets tired) so use them simultaneously. Known as “the shimmy”, use lots of lube and apply different pressure, from a firm caress with your palm and fingers to a stroking movement with your forefinger and thumb, letting the other fingers touch him lightly. Relearning his anatomy means exploring the entire region and pressing buttons he didn’t even know he had. “If you’ve never done it before, include stimulation of the scrotum or perineum (the sensitive area between the anus and scrotum) – it adds a whole new dimension,” suggests Rudolph.

Your mission: Have a bath or shower with your man and get hands on with the soap suds. Initiate a hand job, but encourage your man to get involved. While he’s busy, pay attention to what kind of stroke he begins with and let your hands explore his entire package. The slippery sensation will aid investigation for both of you. And if you’re not ready for perineum action, LaRousse and Sade suggest paying attention to his testicles to have him moaning for more. 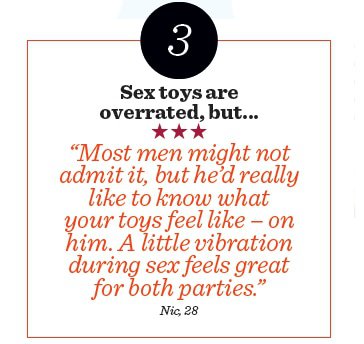 Of course, any urge you have to play with yourself and get to know your body is a victory for him; the better you can navigate your nether regions, the more you can guide him. But many men won’t admit to just how intimidated – or curious – they are about your buzzing buddies. Before you introduce him to your stash of battery-operated Rabbits, start slowly.

READ MORE: “This Is The Hottest Thing A Woman Has Ever Done To Me During Sex”

This is exactly how to have multiple orgasms, according to sexperts. Plus: The one thing 72 percent of women need to have amazing sex.