I was nervous of braaing my bits by mistake. Until I tried it...

When my Sex Editor handed over the Angel, saying “It heats up!” I wondered why out loud. “To feel more like the real thing,” she explained patiently, no doubt adding “Fool” in her head. It had honestly never occurred to me that an ice-cold gadget buzzing around a vagina could be a wee bit clinical.

So, although I was nervous of braaing my bits by mistake, I vowed to test the heating button. [Stuffs it in bag. Leaves office early. I mean, it is the weekend – and… hot date.]

The randiest rabbit by far

Let’s just say my Friday night went reeeeeeeeeally well. May I ooh and aah over a few stand-out features? First, I love the look of this rabbit – because, A) it doesn’t look like an actual animal – hurrah! B) it’s so freakin’ sleek and sexy and C) it’s pink. I’m no girly-girl, but I am weirdly fond of a pink sex toy.

READ MORE: “My Guy Used A Vibrating Cock Ring During Sex – Here’s What It Was Like”

Then there’s the genius curved design of the Angel – the silky-soft swirly ridged shaft, paired with the equally silky-soft swirly ridged clitoral arm, makes for a simultaneous g-spot and clitoris-stimulating bull’s eye. It hit me everywhere that counted, in exactly the way I like it. I’m embarrassed to say I couldn’t make it past the first vibration setting – on the lowest intensity. It was that good.

If I were a guy, I’d be a premature ejaculator…

Sigh. But for those of you who can handle extra stimulation, all 19cm of vibrating bliss comes in seven (yup) vibration modes with five (yup!) varied intensities. Bonus: Unlike some vibrators, which sound as industrial as they look, this gem is whisper-quiet. I mean, don’t take it for a spin as your partner lies Sunday-arvie-snoozing next to you (they will wake up), but it’s not like your roomie next door will wonder what you’re up to.

It’s also really basic to operate, with separate buttons for the buzz… and the heat. So, over to the warming drawer. Here’s what that was like…

READ MORE: If You Don’t Like Vibrators, It’s Because You Haven’t Tried These Three

Suffice it to say, date night turned into the weekend – and parting on Monday morning was hard. She’s a keeper. And, you know, winter is coming, so… 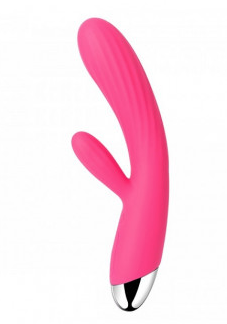