Serena Williams’ Wedding Shoes Are Everything You Ever Wanted

These got us seriously hot under our air-wicked collars…

Tennis super star and all-round WH girl crush, Serena Williams, made headlines for all the non-sporty reasons this weekend when she tied the knot with her boyfriend and Reddit founder, Alexis Ohanian.

According to news reports – and Instagram, obvs – the wedding was straight fairytale, but it was the bride’s wedding reception shoes that got us hot under our air-wicked collars… Because what is arguably the world’s best sports star going to wear to her wedding?

READ MORE: People On The Internet Are Freaking Out About This Sneaker Hack

Well, a pair of custom-made, rhinestone-encrusted Nike Cortez trainers, as it turns out. While Serena slipped into a fairytale of an Alexander McQueen strapless gown to walk down the aisle for the ceremony, she later changed into a feathered Versace mini dress and her Nike trainers for the reception. 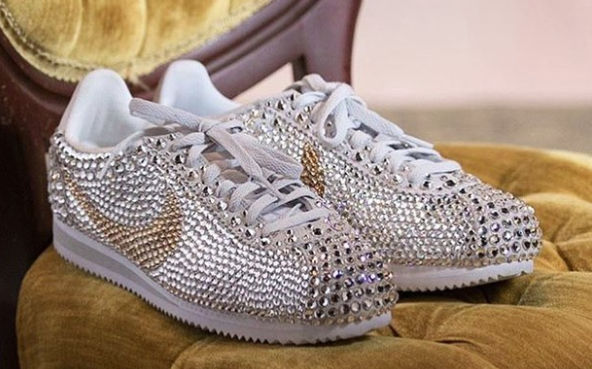 But it was a relationship that has been anchored in fairytale right from the start. In a script straight out of a rom com, the pair met in Rome over a buffet breakfast that never happened. Serena was in town to play tennis at the Italian Open and had heard of Hotel Cavalieri’s legendary breakfast. The Reddit founder had been told similarly good things about the same breakfast and he was in Rome to present at a conference.

READ MORE: We Challenged A Capetonian To Wear Joburg Stye For A Week

As it turns out, the breakfast buffet was closed and so the two were relegated outside to the pool, where they ended up sitting at adjacent tables. She’d never heard of Reddit and he’d never watched a single one of her matches, but opposites clearly do attract…

Eighteen month later, Alexis flew Serena to Rome where he proposed at the same table over which they’d first met and, in September of this year, they welcomed their daughter, Alexis ‘Olympia’ Ohanian Junior, into the world.

Ladies is a “push present” a thing? If so what did you get if anything? #conversationstarter

It’s fair to say that we’d take the fairytale courtship just as fast as we’d snatch up those Nike Cortez numbers.

Here’s exactly what to consider when choosing a sports bra. Plus: How to ‘spring clean’ your fitness gear for better workouts.