“I Changed The Way I Looked At Food And Lost Weight”

"I Changed The Way I Looked At Food And Lost Weight"

When her weight started getting in the way of spending time with her children, Karin Davidson decided it was time to make a change.

Fifteen kilos lighter and a few life lessons later, she’s more confident, happier and healthier. “I can run around with my kids – and now they battle to keep up with me!”

Growing up in a slim and health-conscious family, Karin never expected that she’d one day be overweight. But in just three years her body changed – her weight yo-yoed during her first two pregnancies and the 23kg she picked up during her third stuck fast. She was almost 40 at the time and also under enormous financial pressure. “My way of dealing with it was to eat,” she recalls. “I shovelled as much food as I could – loads of chocolates, biscuits and cakes. I hardly ate any veggies as I wanted to leave space for chocolate after supper! I literally grazed all day.” Exercise was not a feature in Karin’s life and she could no longer play with her children without becoming uncomfortably out of breath. “After five minutes I was so tired I had to stop. I made a choice: no more.”

Karin signed up for the Healthy Weight Programme at the Sports Science Institute of South Africa. “It made me feel like I was back in control of my life; that I was in charge and, even with the chaos around us, what I ate and how I treated my body was back in my hands.” Her hard work quickly paid off – she lost 1.5kg in the first week. “Once I hit the five kilogram mark people started to comment – and they haven’t stopped.” 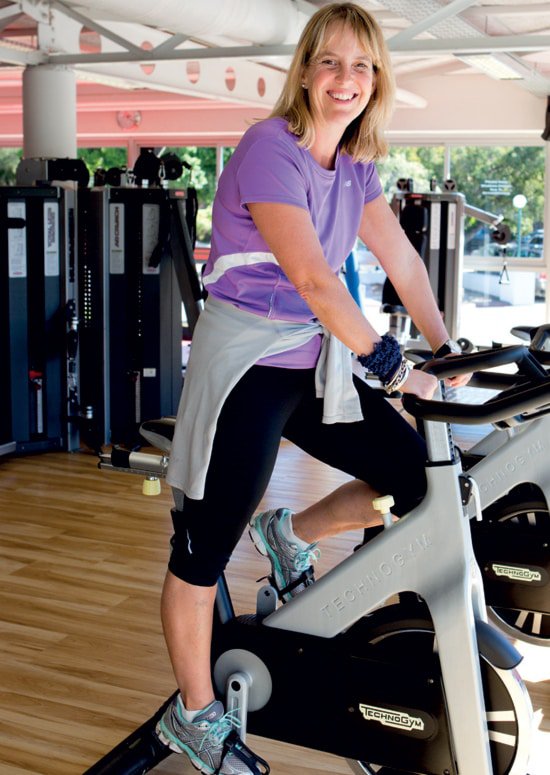 Karin started eating six healthy meals a day and exercising three to four times a week. “There are days when I don’t feel like getting out of bed,” she admits. “But I run three times a week with two friends who I know will be there – we’re one another’s ‘wing chicks’. It’s made a huge difference.”

The extent of Karin’s transformation has been surprising. “My sleep improved, my moods lightened and I’ve gone from a size 40 to a 34. I’m so awed by how far I’ve come and so proud that I came out of a rough patch fitter, stronger and healthier than ever. It’s a great example for my kids!”

Choose. “Decide that you want to change; stop making excuses.”

Join a programme. “If you do things on your own, the excuses start to creep in.”

Use food for good. “I think of food as my body’s petrol. I only eat when I’m hungry.”