“I tried half-heartedly and repeatedly to be more active, but I never really gave it a proper go,” says Kirsten van Rooyen about her lifestyle as a heavy girl. A typical sofa spud, Kirsten would hop on the stationary bike at the gym and people-watch for 20 minutes, pretending she was working out. Until one day, people watching stopped cutting it for her.

“Pastries, pasta, pizza, bread… You name it, I ate it,” says Kirsten. Growing up, she thought she had “puppy fat” and attributed her extra kilos to being big-boned. Added to that, Kirsten hadn’t tried to change her weight fate. “I never really tried to alter my lifestyle or maintain a healthier one, so it was a consistent weight gain since I finished school,” she says.

BEFORE: 87kg
AFTER: 58kg
Height: 1.68m
Time taken to lose weight: 10 months
Secret weapons: Great people and a goal
Lesson learnt: “You can do anything when you have people in your corner”

Eventually, enough was enough. “I hated getting dressed and looking at myself in the mirror,” she admits. Her self-esteem hit an all-time low and going out turned into a nightmare. “I wished I could vanish into the walls at social events; I felt so conscious of my size,” she says. She finally realised she “had the power to change” – and she did.

To start, Kirsten tracked her meals using the app MyFitnessPal. She also took her gym routine more seriously. By using her sister and boyfriend as cheerleaders, she held herself accountable to her workout and food regimen: five small meals a day, consisting of protein and veg, coupled with lots of water, and 30 to 40 minutes of cardio three times a week. “Not long after I started to change my habits, my boyfriend joined me and now we both eat healthily and exercise,” says Kirsten. Once she’d become accustomed to the exercise, her sister, a sports science student, devised a workout plan for her, with each day focusing on a different muscle group: “A mix of weight machines, free weights and body-weight exercises,” she says. 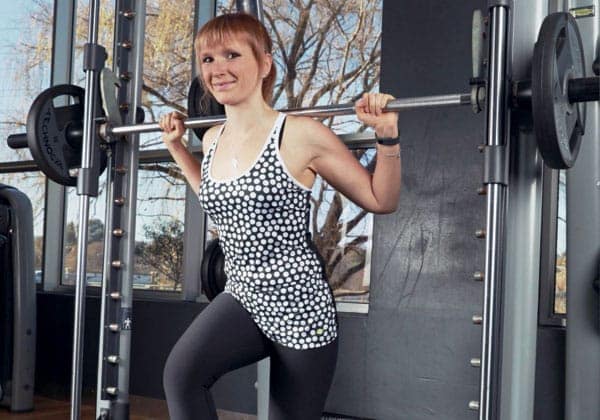 “In six months I’d lost 20kg. It was easy to lose the weight – it’s maintaining the lifestyle that was tough,” says Kirsten. She can run 10 kays in under an hour, can lift heavy weights and has dropped four dress sizes. And it doesn’t end there. Kirsten inspired people around her to get in shape too. Together with her boyfriend, they’ve lost 53kg combined and her dad’s lost a whopping 26kg too.

Know that you can. “There’s a nasty little voice in your head that’ll whisper that you can’t do it. Listen to the loud voice that says: you can!”

Get some support. “My sister and my boyfriend were there to keep my chin up when I was unsure of myself.”

You’re not a number. “Don’t let the scale, your jeans size or any other number define your happiness.”