“The Fear Of Not Fitting Into My Wedding Dress Motivated Me”

"The Fear Of Not Fitting Into My Wedding Dress Motivated Me"

Morgan Brink’s reasons to embark on a major weight-loss programme were twofold.

Here’s how she dropped four dress sizes before her wedding…

Morgan Brink
Before: 94kg
After: 72kg
Height: 1.65m
Time taken to lose weight: 9 months
Lesson learnt: “I can still love food without it being an emotional problem”
Secret weapon: Portion control and the motivation of a wedding

Morgan Brink’s reasons to embark on a major weight-loss programme were twofold: firstly, she was getting married; secondly, she wasn’t happy with how she looked. “I felt ugly. My now-husband had proposed to me and I knew I wanted to look good on my wedding day. I didn’t want to walk down the aisle and feel fat.” On her big day Morgan wowed her guests, but it wasn’t just due to the dress she wore – it was the size of it.

“I was heaviest in my matric year. I ate what I wanted and too much of it,” recalls Morgan. At her heaviest, she had let her former vigorous exercise routine fall by the wayside. “I rode my horse during that time, but with very little enthusiasm; I tried to go to gym to make myself feel better, but did nothing consistent or effective. In December 2010, Morgan’s fiancé couldn’t lift her with ease. Feeling awkward about her size, she stood on a scale and couldn’t believe what she saw: “It read 94kg – only six kilograms away from 100! I was obese. I realised that I needed to do something soon. It was a health risk. And I wanted to look good on my big day.”

Morgan cleaned up her diet. “I started eating smaller meals throughout the day – I halved and then quartered my intake, but I never starved or felt weak. I cut out carbs and consumed less fat and sugar. It was also important that I didn’t skip breakfast,” she says. On a typical day, Morgan would eat eggs and tomatoes for breakfast, chicken or tuna with salad for lunch, “and dinner was the fun part – I had 100g of any meat and as large a quantity of veggies as I wanted,” she says. During the day she snacked on dried fruit, and airpopped popcorn was her treat. In the first two weeks she lost five kilos. “From then on, it went quite fast. Nine months later I’d lost 22kg and gone from a size 40 to a 34.” 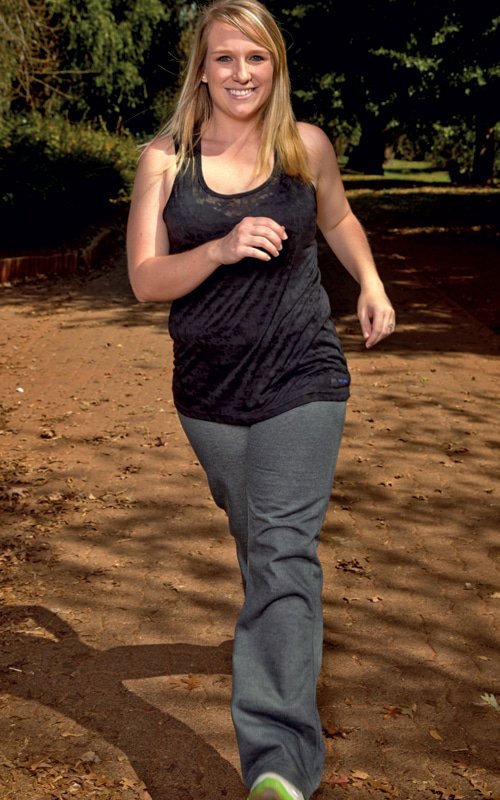 Morgan’s diet isn’t the only thing that received an overhaul: “I feel more confident now, and a lot healthier. I can wear what I want, I don’t get tired and I can do my job better as I don’t have the weight dragging me down.”

Ditch the safety net. “Throw away your ‘fat’ jeans to help prevent you reverting to your old self.”

Start right. “Don’t skip breakfast and you won’t overeat later in the day.”