What Is The Vertical Diet — And Is It Good For Weight Loss?

The answer is... complicated.

There are two types of people in the world: those who do CrossFit, and those who hear about the commitment, dedication and effort involved with this intense fitness mindset and say, “Yeah… no thanks.”

If you fall into the former camp, then you’ve probably already heard the vertical diet being talked about around your local box. But non-CrossFitters may still be in the dark about this inverted diet trend — whose nutrient profile is often described as an upside-down letter “T” — and wondering if it could help them lose weight.

“The vertical diet was created to help bodybuilders easily put on mass to meet weight-gain goals without digestive issues,” says registered dietician Amy Shapiro, founder of Real Nutrition. “The foods allowed are easy to digest and dense, yet they are clean and minimally processed.” 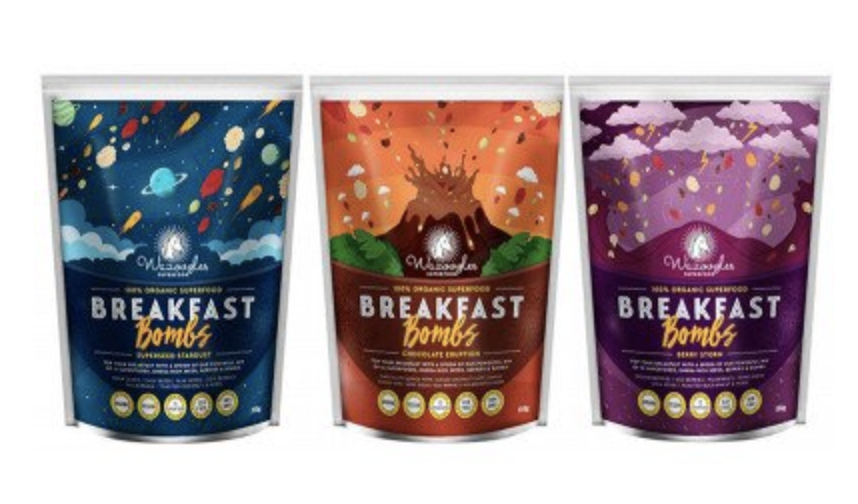 But before you jump on yet another diet bandwagon with a catchy name, there’s some stuff you should know about it. It’s not for everyone, first of all — and it doesn’t meet all your nutritional goals as is. Here’s the whole scoop.

What exactly is the vertical diet, anyway?

Okay, back to the upside-down “T.” The vertical diet gets its name because it emphasises receiving the majority of your calories from a restricted number of nutrient-dense foods instead of eating more evenly, or horizontally, across several different food groups.

The bottom of the upside-down “T” is your foundation — meant to be filled with small quantities of foods providing necessary micronutrients — while the vertical line represents the bulk of your calories for the day (mainly red meat and white rice, but I’ll get to that later).

READ MORE: What Is Alternate-Day Fasting — And Is It A Safe Weight-Loss Method?

The diet was designed by a bodybuilder, Stan Efferding, and because of its focus on protein and carbs, it’s meant to help people build muscle mass and improve energy, stamina and endurance. According to Efferding, reducing your food intake to a limited number of easily digestible foods allows you to enhance your metabolism and improve your gut health.

Ah. So what can (and can’t) you eat on the vertical diet?

When you’re following the vertical diet, you’re supposed to build a solid foundation of micronutrients by eating things like milk, eggs, fish, vitamin C-rich fruits and some vegetables, like potatoes, spinach and carrots, says Shapiro. These foods are not, however, meant to contribute to your overall calorie intake. Instead, you eat them in small amounts for their vitamins, minerals, and antioxidants.

The bulk of your calories comes from red meat and white rice. Why? Well, red meat is a nutrient-dense protein source that’s rich in iron, zinc and vitamin B12 (more so than other proteins, like chicken). Meanwhile, white rice is easily digestible, so it’s a good carb source for athletes. The vertical diet also encourages you to keep increasing your carb intake, i.e. moving up the vertical line over time. 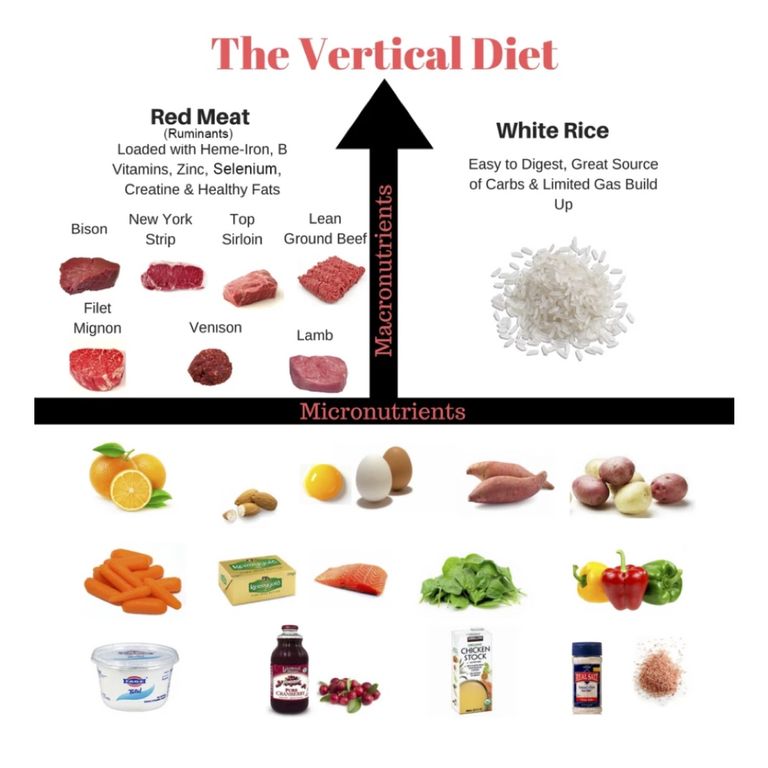 As for what’s off the vertical diet menu: chicken, fish, brown rice, wheat-based and whole-grain foods, beans and legumes, and high-raffinose (a.k.a. gassy) foods, like broccoli and cauliflower. You can’t have added or artificial sugars. There are no onions or garlic allowed, either. Basically, any food that’s not super digestible should be avoided.

Sounds… interesting. So can the vertical diet help me lose weight?

The only reason people who aren’t extreme athletes or powerlifters might consider doing a diet like this is if it promises weight loss, right? (Otherwise, just… why?)

But here’s the thing: Though the vertical diet could result in weight loss for some (such as those who eat a lot of processed foods or sugars), it’s not really designed for that. Remember, the diet is supposed to help people gain muscle mass, so to lose weight — as in, fat — on the diet, you have to do some strategic tweaking.

READ MORE: Low-Carb Vs. Keto: What’s The Diff And Which Is Better?

“You could lose weight on this diet if you watch portions and eliminate excessive amounts of white rice and simple carbs,” says Shapiro.

Because the programme limits many plant-based foods needed for weight loss, she adds, you would also want to increase the amount of vegetables and reduce the quantity of fatty cuts of meat and cheese you consume. (Hello, keto’s antithesis!)

Got it. Well, are there any other benefits?

Great Q! The vertical diet claims that it will improve your gut health, and that may be true: The diet is based around foods that are mostly low in FODMAPs (a.k.a. fermentable carbs), which can contribute to bloating, gas, diarrhoea and other GI conditions like irritable bowel syndrome (IBS) and Crohn’s disease when eaten in high quantities.

A 2016 review published in Clinical and Experimental Gastroenterology showed that mostly all of the studies done on low FODMAP diets are correlated with improvement of IBS symptoms, with up to 86 percent of patients reporting fewer GI symptoms.

So, by sheer virtue of being mostly low in FODMAPs, the vertical diet may ease some of your GI distress. And, certainly, if you’re an athlete looking to put on muscle, the nutrient profile here can help you meet your goals without causing other problems.

“Usually, when you’re trying to put on muscle mass and eating large quantities, you can feel overly full, gassy and bloated,” explains Shapiro. “Vertical-diet foods are streamlined to digest easily and with minimal side effects. But because they are calorically dense, they assist with weight gain” — unless, once again, you customise the plan for your goals.

What about the downsides — are there any?

Though the foods you eat on the vertical diet are relatively clean, whole foods, there’s historically been a lot of concerns about the effects of high red meat consumption on overall health. The American Heart Association warns that eating too much red meat can have negative effects on your cholesterol levels and heart health, but some newer studies — including one done at the Harvard School of Public Health — debate whether red meat is really to blame for heart disease.

READ MORE: 5 Mindful Eating Tips That Will Change Your Relationship With Food

It’s also worth noting that the vertical diet is fairly deficient in fibre, since it emphasises white rice and cuts out whole grains, legumes and some vegetables. Shapiro says that fibre is crucial for maintaining cholesterol levels and heart health (not to mention regular bowel movements). She also notes that the diet is low in probiotics (because it cuts out most fermented foods) and high in animal protein, saturated fat and simple carbs.

So although you’re eating “cleaner,” you’re not necessarily eating more nutritiously — and you could suffer from a lack of fibre and probiotics if you’re not compensating for those losses.

So should I try the vertical diet or not?

Shapiro says if you’re a bodybuilder or extreme athlete looking to put on mass as your number-one goal, the vertical diet can be an effective way to get there. And even if you’re a more moderate gym rat, she says, it can still work for you — but with some important modifications.

“I would recommend including additional sprouted grains, nuts, seeds, vegetables and fruits, and limiting the intake of saturated fat from red meat and full-fat dairy,” Shapiro advises.

Although the diet mostly eliminates added sugars and processed foods (always a good thing), casual dieters just looking to lose weight might struggle to follow the high-protein, high-carb requirements of the vertical diet without accidentally gaining weight. And they might find themselves deficient in many nutrients that contribute to a broader definition of health.

At the end of the day, it’s your call, but only try an eating plan that suits you — not your kinda-obnoxious, CrossFit-obsessed next-door neighbour.