“My Chronic Snoring Problem Forced Me To Adopt A Healthy Lifestyle”

… And she did. “I’d been overweight since the age of twelve,” she confesses. As a kid, her dad would spoil her with sweet treats to make up for not being home. “I started loving junk food and ate whatever I craved,” she says.

Even though Zimasa played sports at school (hockey, basketball and netball), she still kept piling on the weight. By the time she got to varsity, junk food was a regular meal. “I used to eat very bad food, like burgers, fries, frizzy drinks almost everyday,” she admits. And exercise? It didn’t take much priority: “I’d try go to the gym every now and then,” she says. “I’d do very little exercise, which didn’t burn enough kilojoules for what I ate.”

Doctors had told her it was time to lose weight, but it was something else that made her change. Zimasa started to have breathing problems, most likely a result of her lifestyle. It also caused her to snore at night. One night, at a sleepover with friends, someone recorded her snoring and made her listen to it the next morning. It was a rude awakening. “I was so embarrassed! That day, I told myself I would lose this weight,” she says. 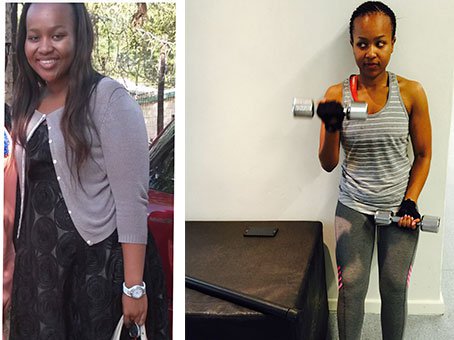 Zimasa’s first move was to makeover her diet. “I began with an eating plan consisting of protein, fibre and healthy fats,” she explains. She cut out sugary food and ate way fewer carbs. She attacked an exercise regime with fervour: “I would walk on the treadmill for 20-30 minutes, cycle for 15 minutes and run two kilometres on the beach on Friday mornings,” she says. “I’d wake up and drink two glasses of water, go to the gym, and eat a healthy breakfast,” she says. Another big part of her lifestyle was prepping all her meals a day before, so she could stay on track.

Read this: 4 Ways Eating Potatoes Can Help You Lose Weight

With great lifestyle comes a banging body. After two weeks, Zimasa dropped three kilos – and it showed. “I’d feel encouraged by people who’d compliment me,” she says. “The kilos just melted off and I’d never seen that before in my life. I was motivated more than ever to keep going,” Zimasa explains. Now, she does 21km races at least once a month, and has dropped 6 dress sizes. But the best part? Her confidence. “My life has changed so much. I can wear whatever I want and I look so good in anything,” she says, adding that “I have a high self-esteem and it’s helped me socialise with people!” Atta girl.

Get rid of any junk food that’ll be in your way of a healthy lifestyle.

Wanna complete a run in less time? Plank for a little longer? Write down these goals and stick to them!

A healthy diet and exercise go hand in hand. Make sure you get the later going and you’ll see results.