Get Fit Anywhere With This Resistance Band Workout

Sat hello to the travelling circuit

You know you’re winning when exercise has become a habit – going to the gym and getting your workout in isn’t a chore, it’s just part of your day, as natural as brushing your teeth. That level of commitment doesn’t happen overnight either. It’s something you probably started working on in January, possibly lost your way with around June and then clawed your way back to in September. So now is not the time to let the holidays derail your progress.

GYM IN YOUR BEACH BAG

You may not be able to go to the gym when you’re hitting the seaside in Scottburgh on the South Coast, but you can take the gym circuit along with you wherever you’re headed these holidays. All you need are two totally affordable, uber-packable pieces of equipment and this workout from Joburg based trainer and WH Next Fitness Star 2017 Inge Bezuidenhout (pictured). “The resistance band is very small and can easily fit into your luggage,” says Inge. “You also don’t need a lot of space to perform exercises with a resistance band and it can be used for training almost every muscle in your body. Plus, the intensity can be adjusted, the same as with any machine.” When choosing a resistance band, you get a variety of thicknesses. The thicker the band, the higher the intensity – just like adding more bricks to your weight stack increases resistance on a cable machine.

READ MORE: “Fitness Is Not About Losing Weight — It’s A Lifestyle”

If you’re new to exercise or typically set your circuit machines to just one or two bricks, Inge recommends using the thinnest band you can find, which will be the easiest to train with. “Also, don’t place too much resistance on the band,” she advises. You can adjust the resistance by altering the band’s length– hold a short section or fold it over and you have high resistance; use it at its full length for lowest resistance. “I use a resistance band with all my clients because it can adjust to various fitness and strength levels,” says Inge, who specialises in training women at their homes. “It’s also so versatile– it can be used as is, in a loop format or you can tie it to a pole or pillar for pulling exercises. Alternatively, you can use it with a partner or connected to a door to perform various exercises.”

The workout is divided into two sets, each consisting of three exercises. Starting with Set 1, do the three exercises in order for the prescribed number of reps, then go back and repeat twice more for a total of three rounds. Once you’ve done three rounds of Set 1, move on to Set 2, following the same pattern.

Rounds:3- start each round with 60 seconds of skipping

READ MORE: The 20-Minute Bodyweight Workout That Will Tone Your Entire Bod

Rounds: 3- start each set with 20 jumping jacks (for an extra challenge, use a band to make them harder

Fold the band and place it around your shoulders, holding one end in each hand, then get into the top of a push-up, tummy tight and bum squeezed (A). Keeping your spine straight, lower your body until your chest is a few centimetres above the ground.  (B), then push back to start. 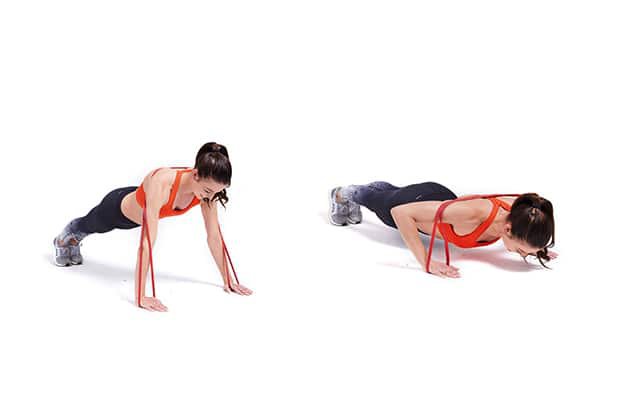 Tie the band to a pole about 30cm from the floor, then lie on your back, holding the band with both hands, shoulder width apart and extended above your head (A). As you lift your hips so that you form a straight line from your knees to your shoulders, pull the band to your hips with straight arms, squeezing your bum (B). Lower back to start. That’s one rep. 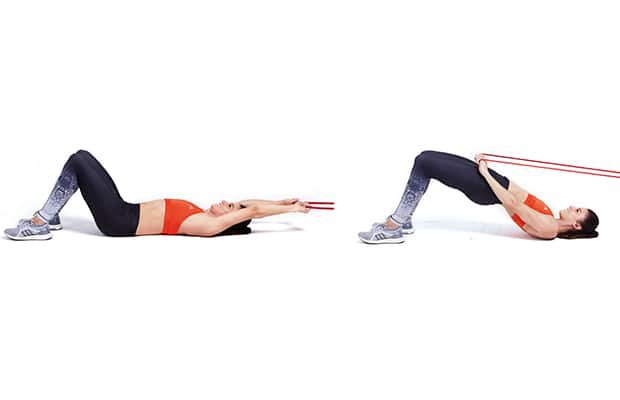 Stand on a band, feet shoulder-width apart, then cross the ends of the band and hold one in each hand (A). Step your right leg to the right and then your left leg to the left (B). Return to start. That’s one rep 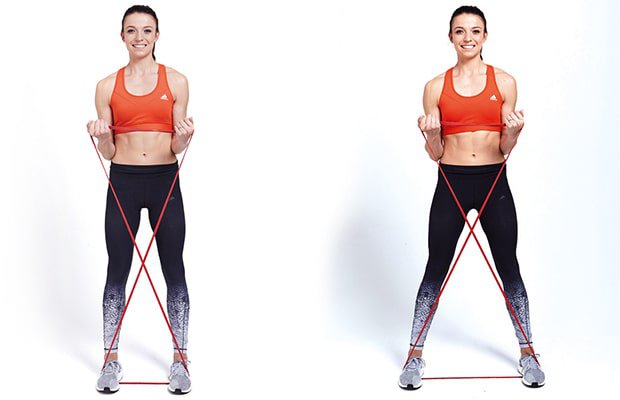 Start by holding the band in both hands, with your hands above your head and your feet together (A). As you jump your legs apart, pull the band open in front of your face (B) then hop back to start. That’s one rep. 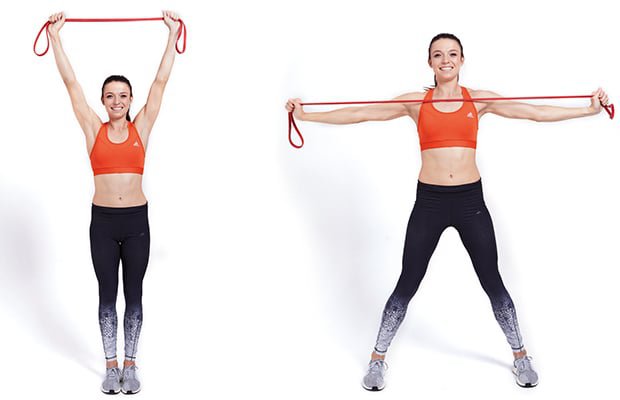 READ MORE: “I Used This Weight Loss Programme And It Totally Changed My Body”

Tie the band at the bottom of a sturdy pole. Put one foot inside the loop and lift your heel to put the band underneath your foot (A). Stand upright, holding onto a wall for balance, and slowly kick your foot backwards by straightening your leg (B). Control the movement back to start. That’s one rep 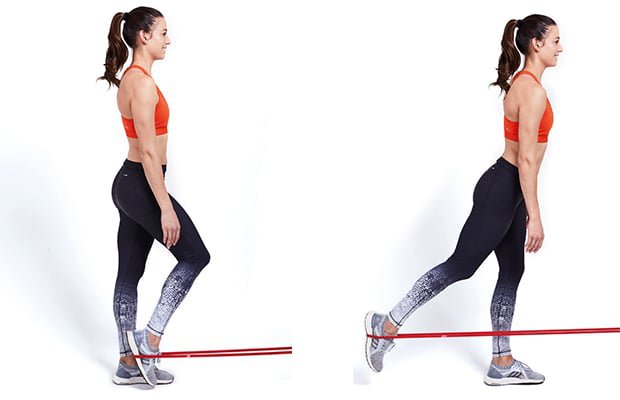 Tie the band to a sturdy pole at shoulder height and stand with feet shoulder-width apart, holding the band with both hands together towards the pole (A). Use both arms to pull the band in front of you (B). Control the movement back to start. That’s one rep. 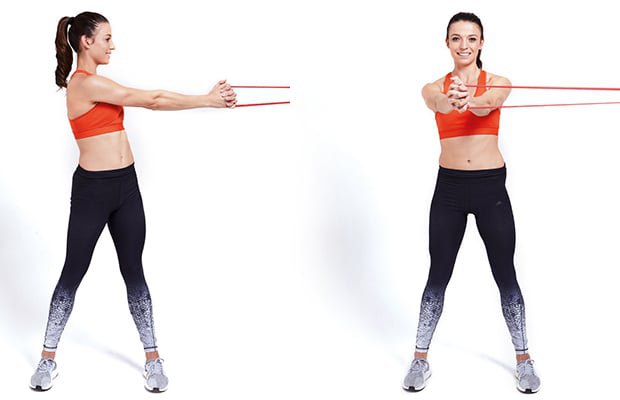 READ MORE: Slim Down In Time For Summer With This Quick Total-Body Workout

Stand on the band with feet hip-width apart, holding the ends in both hands. Your hands should be shoulder-width apart in line with your chest, palms facing upwards (A). Sit back into a squat (B) and as you come up, press with both hands overhead (C). That’s one rep. Immediately lower back into another squat for your next rep. 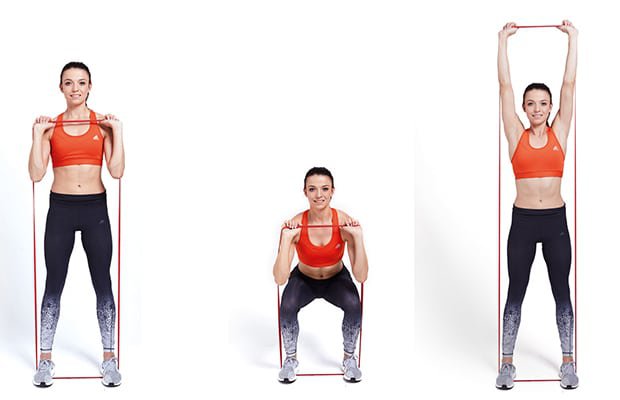