Would you dare to do this?

Photographs and illustrations supplied by Tegan

Have you ever had the urge to just get on your bike and ride away into the sunset? Cue inspirational music and frolicking ponies. For most cyclists, this is a dream, but not one we’d actually have the balls to fulfil. Unless your name is Tegan Phillips and you just punch fear in the face…

Tegan Phillips is the creator of Unclipped Adventure comics. If you’re not following her on Insta or Facebook, girl, you’re missing out. Her path wasn’t always towards adventure, though. “I was headed on a very normal path,” Tegan begins. “Very conventional. That’s what we’re taught in school, this is how your life is going to play out, and you don’t know any different.”

But then a competition caught her eye. An opportunity to win a touring bike from the legendary bikepacker, Tom Allen. “It was a Sunday night and [the competition] ended at midnight,” Tegan explains. “I’d been putting off entering because my parents didn’t like the idea.” In Tom’s blog post, outlining the competition details, he said: “I want to give the bicycle and all of the gear to another adventurous soul – someone who’s up for taking the reins and heading off on an adventurous bicycle journey this summer.”

This adventurous soul was waiting in SA. “I thought, what if I draw some cartoons and make a creative entry,” Tegan continues. She spent that night creating her first ever cartoons on an iPad, explaining why she should get the bike. She did. And so began the cycling trip of a lifetime…

How Does Accommodation Work On A Bike Trip?

Simple. Crash (not literally) where you end up after a day on the road. “I would sort of look for campsites,” Tegan says. “There’s a couch-surfing website called Warm Showers and I stayed with people through this.” But if no campsites presented themselves and couch options were thin on the ground, any patch of land would do. “It was a bit scary for me at first because it was such a new concept. I was mostly scared that someone was gonna be, like, ‘This is my property!’ and come out with a shotgun.”

“Because you’re on a touring bike, you can actually carry a lot,” Tegan explains. She’d stop at a market and load up her bike with everything necessary to fuel her adventures. “When [my family] did our Africa trip, our bikes were on the heavier side, like 50kg!”

“There’s a little cycle touring ritual whenever you get to a petrol station with a little café,” Tegan continues. “You plug in all your sh*t to charge, fill up your water bottles and buy snacks and coffee.” Obvs. Coffee rides for the win. “I remember a few times getting to the petrol station, going to the bathroom and washing my hair,” she recalls, laughing.

READ MORE: Exactly How To “Eat By Colour” To Maximise Your Endurance

Punching Fear In The Face…

But how do you just get on a bike and cycle from England to Spain without planning where you will stay, what route you will take… how?

“I don’t have any foresight at all,” she jokes. “I’m one of those people who just doesn’t think about the eventualities. In normal life, it’s problematic. But with adventuring, it helps. If you think about all the things that could go wrong, there are so many things that you’re just not going to do.” The hardest part of an adventure is the first step, out the front door.

“I could get kidnapped, I could get lost, injured,” Tegan starts listing. “But when stuff goes wrong, you just deal with it.” And stuff did go wrong. On her first day, actually. “It was raining, I got super lost and I was just using my intuition to find a way,” Tegan begins. “I took the wrong turn and ended up back at the place I started! It was miserable trying to ride the bike with panniers for the first time. My lunch was in my basket and turned into mush [in the rain].”

After a long, wet day on the bike, Tegan finally got to her destination. “And then I dropped my bike on my leg and sliced open my ankle,” she recalls. “Then my cellphone died and I still needed to call the people I was staying with. I sat in the rain by myself for two hours.” Finally, a shop in the mall allowed her to charge her phone – while Tegan dripped rain and blood on the floor. “After that first day I thought, what am I doing?” Tegan admits. But a few kilometres on the bike the next day and the happy spirit of adventure returned. 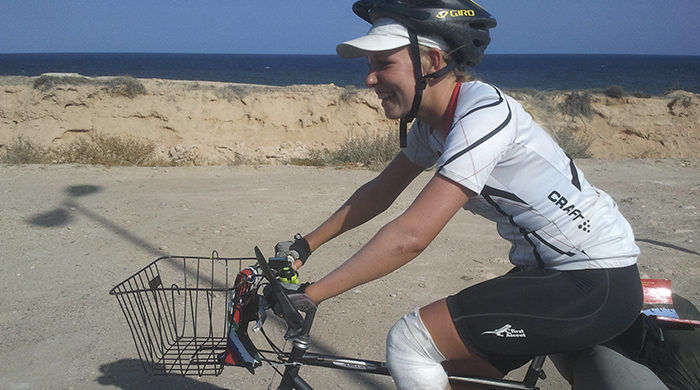 “With cycle touring, I learned quickly that you have to just get used to going to a stranger and saying, ‘Can I use your phone?’, ‘Can I have some water?’, ‘Can I sleep on your lawn?’,” Tegan says. It’s not something we do in everyday life. We avoid these situations because they make us uncomfortable. “We’re all just so scared of each other,” Tegan laughs. “It’s just more reason to greet people – to at least make them question why we are so unfriendly to each other. Maybe if we do it enough, people will open up.”

“The first time [I learned to] punch fear in the face, I was on top of a big mountain in Spain by myself with nothing but a bicycle and a tent. It was almost dark and I was very lost and very, very scared. It was my bad judgment that got me there,” Tegan recalls. Turning back wasn’t an option because back was England. “My survival skills said, sorry we’re not going to die here and they made me punch fear in the face by knocking on a stranger’s door, very timidly,” Tegan admits. She ended up staying the night at a lovely Spanish woman’s home. 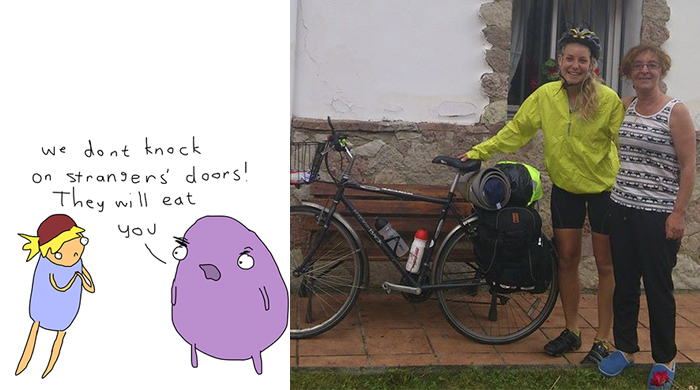 Tegan is currently working on building her career as a cartoonist. “I’ve been trying to make money so I can adventure without worrying about how I’m going to pay for this,” Tegan says. “Sponsorship is amazing, but I like the freedom to stop when I want, change the route or change a country…”

The plan is Sweden next year for her sister’s graduation. Her transport of choice? Bike, obvs.

When you spend so long preparing but then you just want it to be over ? #capetowncycletour