“I Trained With The Blitzboks — And This Is What Happened”

Rugby for women? Why, not?

If you asked me about rugby 10 years ago, I would’ve told you about how I had no clue about the game, the rules or the positions. I was, however, at every single rugby game at the boys’ school across the road. I obviously wasn’t there to observe the game.

When we think about women playing sport, rugby isn’t the first thing that comes to mind, right? Back then, I had no clue women could even play rugby. That said, unfortunately women’s rugby in this country isn’t a sport that’s often spoken about.

Yup — the same rules, rugby field and equipment apply, with a slight difference in time for a normal game versus a Sevens game. Let’s fast-forward to 2019, where society still harbours misconceptions about women who play rugby. The game is often associated with masculine and aggressive men. But the beauty of the evolution of sport is that a new wave of beautiful, strong, independent women is on the rise — and we have rugby to thank for it.

One ordinary Monday, I trained with the Blitzboks

I spent the afternoon at the Stellenbosch Sports Academy (SAS) to train like a Blitzbok. The Springbok Women’s Sevens team have a nickname – the Imbokodo. Women’s Health managing digital editor, Susan Barrett, content producer, Chandre Davids, and I stepped into what looked like an athletes’ hotel.

The Stellenbosch Academy of Sport is home to the Springbok Women’s Sevens, SA Rugby Sevens Academy and the SA Rugby Academy (under-20s) amongst others. The training centre is equipped with medical and rehab facilities. Players also get healthy meal options, training facilities, exceptional physiotherapists and coaches for each skill set.

We sat down with a few members of the team to find out how they stepped into the world of South African sport — before heading out to the field to get a taste of what it really feels like to be a Boks player.

READ MORE: Why Are SA’s Sportswomen Not Getting The Recognition They Deserve?

First, get your head in the game…

Eloise Webb started playing rugby with her brother. At the time, she was a cricket player with the current Women’s Sevens Captain Zintle Mpupha. Eloise admits she wasn’t a fan of the sport in the beginning, because of the physical contact. “I stopped after the first training session, but my mom, who is a very sporty person, doesn’t believe in giving up and she convinced me to go again,” says Eloise. She returned and realised that rugby is more than just the physical contact; there are way more elements involved — think fierce ball skills, for one. She’s been playing ever since.

I was shocked to find that most of the team were the size of the average woman in height. I was curious to know how the positions are selected in rugby, and whether or not their height and weight had anything to do with their positions. Sevens player Marthrin Summer says tall players are likely to be found in the forward positions because they use their size and strength to get the ball. Centre positions create space for the wings on the outside, and the wing players are usually sprinters and quick on their feet.

As women, we’re known for our multitasking skills. As much as the game involves physical contact, there’s always a strategy. It’s important for players to study the game as it takes place to ensure success.

Eating and exercise — a formidable mix 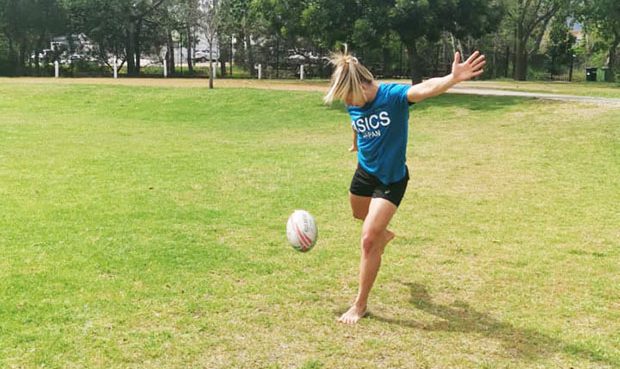 Sevens player Marthin says the team sticks to a healthy eating plan at the Stellenbosch Sports Academy. “We eat plenty of vegetables and protein, with little dessert, if any,” she says. Eloise adds that maintaining her health and fitness is key. “We have a good relationship with our strength and condition coach and he trusts us with what we eat,” she says.

Why you should back our girls 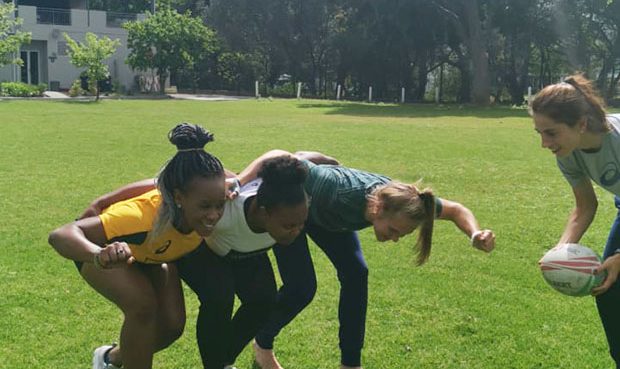 These women are empowered, love challenges and some are more “girly” than you think. The Boks Women’s Sevens team are preparing for the African qualifiers for the 2020 Olympic Games taking place in Tunisia this month. They’ll play their very first women’s tournament at the HSBC Cape Town Sevens in December. The Springbok Women have also secured their place in the 2021 Women’s Rugby World Cup in New Zealand.

Inspired yet? We are. These incredible women come from all walks of life but have one thing in common: love of the game. I spoke to women who are not only strong, but smart and educated too. These women hold Human Movement Science, Engineering and Education degrees! If you want to know about a power team with beauty and brains, then the Women’s Sevens Boks team is your girl gang… 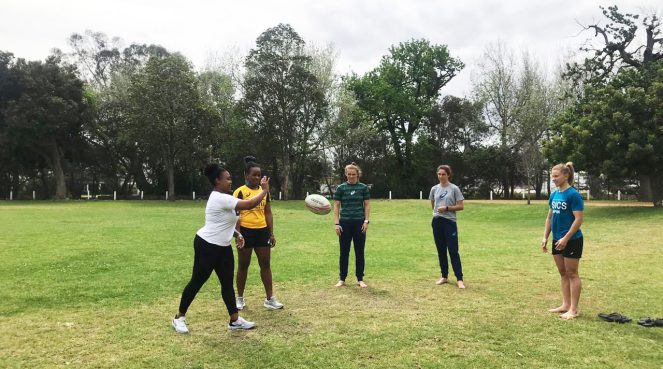 This is a wonderful way for young girls to learn that they can do or play any sport their male counterparts play. Player Nadine Roos says many women are afraid of what people will think of them if they play rugby because the game is a male-dominated sport. “Women’s rugby is growing in South Africa — people’s perceptions shouldn’t stop you from trying it out,” she says.

2/ The game is empowering

The game of rugby allows girls and women of all ages to boost their self-esteem and build a strong camaraderie with the rest of the team. Basically an instant support structure and sisterhood for life.

When you play rugby, you’re at risk of being physically knocked down, which is pretty much the same as what happens in real life. During my conversations with the players, many of them spoke about overcoming challenges and learning discipline through the sport.

Vice-captain Zinhle Ndowande says many young girls have a problem with where they come from and can often let their past get to them. “Young girls who grow up in the townships sometimes want to play rugby because of their situations at home, but don’t believe they will ever make it. I’ve learnt that it’s not where you come from, but where you want to be. With hard work and passion, you can do anything. Never let the past determine your future,” she says. 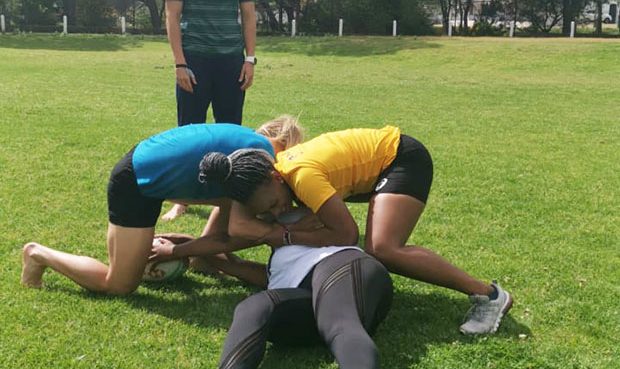 I took a few mild knocks, but I was giggling for the most part. If you’re like me and physical contact terrifies you, then overcoming a fear will leave you feeling powerful. Life lesson to remember — fall a few times, but always get up again!

Get to know the Blitzboks 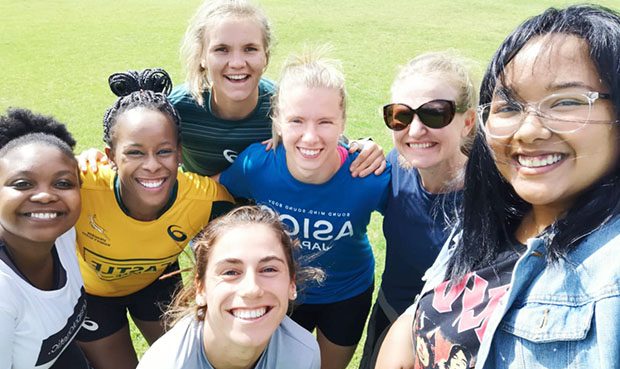 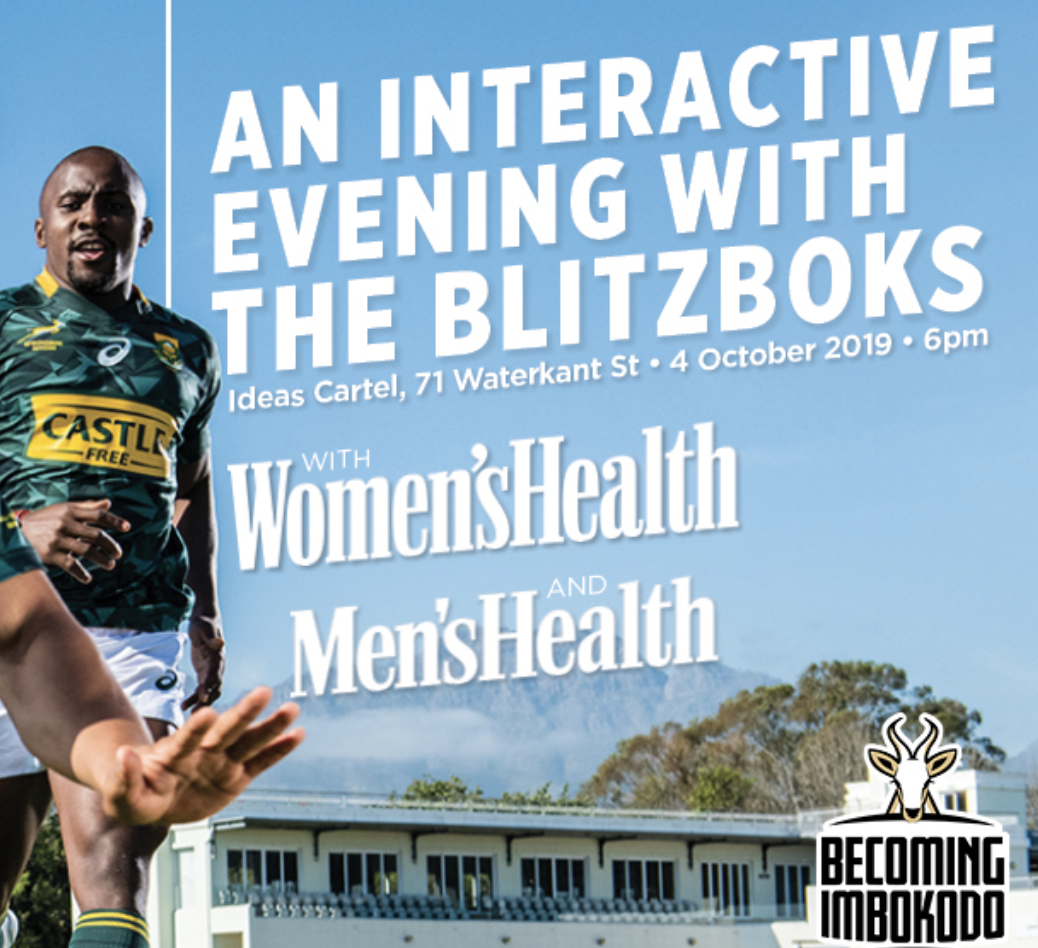 Get your tickets to secure your spot!

Women’s Health and Men’s Health, together with Castle Free, will be hosting an interactive evening this Friday, where you can meet the Blitzbok Women’s team and be part of a special screening of the premier of the new reality show Becoming Imbokodo with Castle Free. Imbokodo is a well-known word derived from “Wathint’ Abafazi, Wathinta Imboko” which translates to “You strike a woman, you strike a rock.” Get your ticket here.