All I could think was: What have I got myself into?

I’m that person that enters every Facebook or Insta competition. And sometimes it pays off. So when I saw that Embark Training was giving away an entry to the Cape Cross Triathlon Stage Race, I entered straight away. I didn’t exactly read what the race entailed, where it was, distances… And then a few days later I got a notification to let me know that I was the lucky winner. That’s when I first checked the race out. A stage race of triathlons. Three days, three triathlons. Each day! I was excited, and nervous…

The Build Up To The Cape Cross Tri

Luckily, I already have quite a bit of cycling and running in my training programme. I didn’t need to adjust much, except for the fact that I haven’t really done swimming training since primary school. That discipline may just prove a problem. What with the cold weather, lack of a heated pool and a wetsuit, I was beginning to panic just a wee smidge. It was then that my Mom pointed out there was a dry triathlon option. A duathlon version. I jumped on this chicken run. An easy way out, but the duathlon would be challenging enough.

I arrived at the race start. To say I was nervous would be an understatement. Quivering in my cycling shoes would be a more accurate description. I approached the registration table, all the while noticing how professional all these athletes looked. As I received my bag of race goodies and some race instructions, speed machine Michael Lord arrived. This was going to be a serious triathlon. I was super stoked not to be swimming as the wind had picked up and it was icy. There was only one other guy joining me in the dry version of the event. We waited together in nervous anticipation.

READ MORE: 6 Amazing Triathlons That Are Perfect For Newbies

The swimmers lined up, the starting horn went and they were off. Fifteen minutes after the first few swimmers had exited the water, we were released onto the trails. Pedalling like mad, I raced after the quickly disappearing pros. Pent-up nervous energy fuelled me forward. The cycling trails on the first day mainly consisted of farm roads and even a few small sections of tar.

Then, 35kms later, I reached transition. I handed my bike over to the waiting Cape Cross Tri crew, who would transport it to the finish. First, off with the cycling shoes, gloves and helmet, then trail shoes on. Time to run. The trail run on the first day was absolutely breathtaking, physically and literally. I was only too grateful when the finish line came into sight at the Elgin Grabouw Country Club. 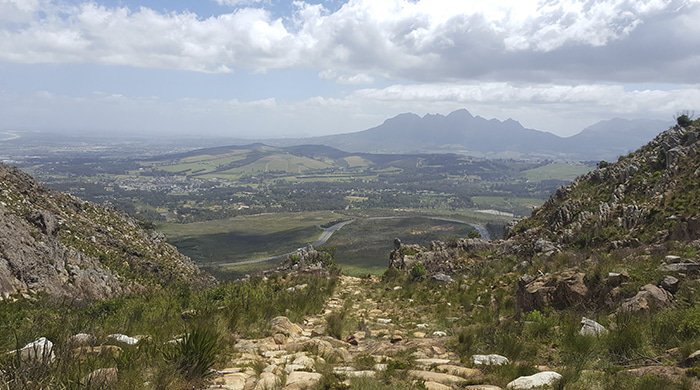 On Day Two, I got to the race village early, only to find that the swim start was being pushed back due to the strong, persistent wind that was blasting waves across the Eikenhof dam. In the end, the Cape Cross Tri organisers had no choice but to cancel the swim as it would be dangerous. Instead, there would be a 3km run to start off the race. The rest of the day would remain the same: a 28km cycle followed by a 10km trail run. I was officially competing against all the other athletes. I intended to push myself.

READ MORE: Here’s How To Really Train For A Triathlon Without Burning Out

The 3km run became more of a sprint as we all paced it down the road and then back to our waiting bikes. A quick gear change and out the transition pen. I was lying second out of the ladies. But this was short-lived. The cycle headed off with a gusty tailwind behind us. Even this couldn’t keep me in that second spot. Third would be just fine, I thought, as I settled into a steady rhythm. Then we turned for home. Headwind. All. The. Way. My legs were burning as I powered along the famous Elgin Grabouw Country Club A-Z singletracks. Transition quickly approaching…

READ MORE: Exactly How To “Eat By Colour” To Maximise Your Endurance

I left the transition pen still in third position, but the damage had been done. My left knee was not happy with me at all. Something in my bike set-up had aggravated it – and it was letting me know. And then she passed me. I was in fourth place, podium out of the question. I was bitterly disappointed. In the last kay, with the finish so tantalisingly close, I realised that the third lady was only a few metres ahead. Sprint Cally, go on sprint! Five metres, two, I was passing her. Across the line and claiming that third spot and a bottle of wine. 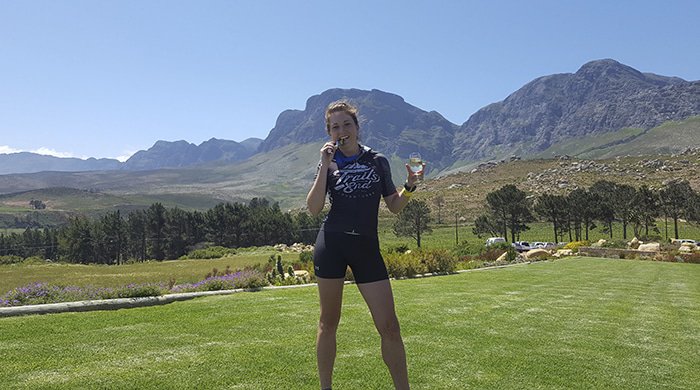 Day 3 and the swim was back on. My knee was swollen and angry. With my bike set-up adjusted, though, I was confident I’d finish. Back in the dry competition of two, I decided to take this last day easy and enjoy the views. Day 3 featured the most elevation on the cycle. A nice 29km with a mixture of single and jeep tracks. The trail run would take us up and over the Gantouw pass and all the way down to Idiom Wine Farm.

It was with mixed emotions that I crossed the finish line. I was happy that I’d completed the day, but sad that the Cape Cross Tri 2018 was officially over. I have started swimming training and I plan to take part next year in the full event. The triathlon bug has bitten…