Have You Tried The Game Of Thrones Death-By-Burpees Challenge?

Winter has been a long time coming in Westeros since we first heard the phrase back in April 2011, when Game Of Thrones Season 1 hit our TV screens and changed the world forever. How innocent we were back then… raise your hand if you truly believed someone was going to save Ned Stark. Eish. But when you’ve been through the Red Wedding, the Mountain vs the Viper and realised that not even direwolves and dragons are safe from the ruthless storytelling of George RR Martin, you’ll know that the only certainty in the Seven Kingdoms is that characters are going to die. So what more fitting way to celebrate the extremely long-awaited final season than burpees?

When winter’s here and you didn’t moisturise…

READ MORE: TV Presenter Lorna Maseko’s 5 Secrets For Getting Everything You Want Out Of Life

Unlike the battle for the Iron Throne, this game is simple. You don’t even need to leave your couch between the opening sequence and whatever harrowing scene rocks you to the core an hour later.

1/ Print the GoT bingo sheet or screen grab it to your phone.

2/ Keep it handy when you watch GoT so you can tick things off as they appear in the episode (IMPORTANT: you only need to count the first appearance; we don’t want you to die literally!). Each one corresponds with a number of burpees.

3/ At the end of the episode, add up the number of burpees you have to do.

4/ Do the burpees all in one go at some point before the next GoT episode airs. Rest as needed, by try to rest as little as possible. Post a pic or video and tag Women’s Health on Instagram or Twitter using #WHGoTChallenge.

READ MORE: This is how Lucifer star Lesley-Ann Brandt got in shape so soon after having a baby

Fitness Level Rickon Stark (shame…too soon?): Step your legs in and out; no push-up

Fitness Level Night’s Watch: Jump your legs in and out; no push-up

Fitness Level Unsullied Warrior: Jump your legs in and out; touch your chest to the floor each time

READ MORE: How To Burpees Like A Fitness Beast

Print it. Save it to your phone. And now your watch begins… 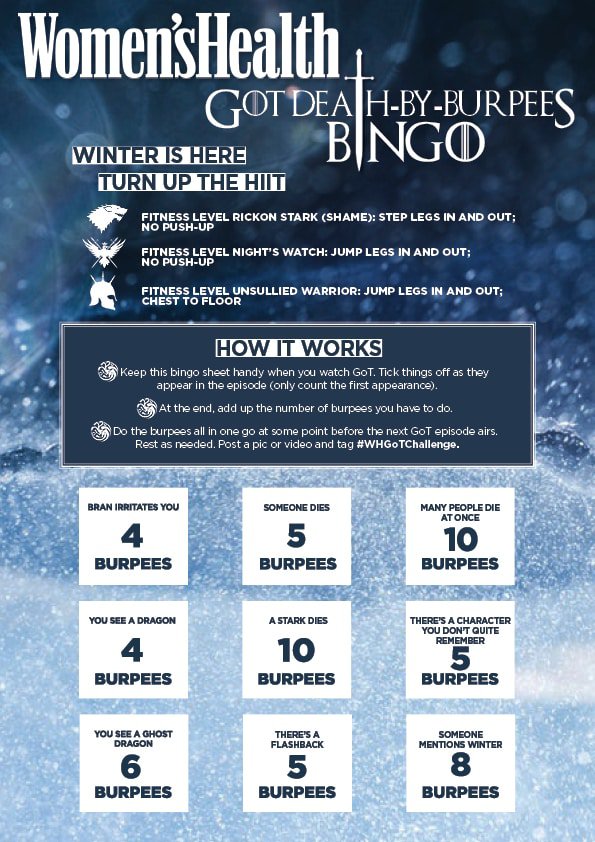