It all began with a murmur. A slight possibility that there would be a cycling adventure and I would be the lucky candidate for the trip. I tried not to get too excited because I’ve always been told that when things sound too good to be true – they usually are. But this time the Nedbank Tour De Tuli was very much a reality and very much my next adventure. Keen to know what went down?

Hold up, I’m getting ahead of myself. What even is the Nedbank Tour De Tuli? If you haven’t heard of it, no stress, I hadn’t either. After some googling, stalking, phone calls and emails I had the lowdown and all the details were lining up to an incredible event.

In four days, cyclists cover the Tuli Block, which spans Zimbabwe, Botswana and South Africa. Each day is anything between 50 and 85km and winds between mopane trees, sandstone and the occasional elephant, giraffe and impala. The event includes a few border crossing, so a passport was essential on the packing list.

The Nedbank Tour De Tuli is a journey. And this journey involved a few different modes of transport: a flight, a car drive, the Gautrain, many Ubers, and a seven-hour bus drive. I arrived in Jozi a day early so I could get organised before the early departure to Mapungubwe National Park.

First up, I needed a bike. Luckily, lightning struck twice and the incredible guys at Pyga Bikes provided me with a babe of a bike, again. When I say babe, I mean the Pyga StageMAX with mid-travel suspension, a full Toray carbon fibre frame, a dropper post and a geometry that’s perfect for marathon events (like the Nedbank Tour De Tuli) plus a bit of trail fun (berms, jumps, I’m looking at you). Literally frothing.

READ MORE: “I Flew To Joburg For A Cycle Race, And Here’s Why I’d Do It Again”

The bus to Mapungubwe National Park would be leaving at 6am the next morning. That meant getting there around 5:30am to ensure all my bags and bikes were loaded correctly. The meeting spot: Wilderness Safaris. The lovely folk there had coffee and snacks ready and waiting, which made the early start 100% better. A few cups later and we were all set for the drive up. I had a good book to pass the hours, the excitement (and nerves) building.

A compelling mystery novel made for a speedy bus trip. We got to the race village at 3pm and – wow. Picture this: On the top of a remote hill in the middle of nowhere – a race village like you’ve never seen before, a massive eating zone, lines of tents for tired cyclists to rest, bike zones… And all this accompanied by a view that takes your breath away. I found my bag and began the trek to my tent. And that’s when I met the greatest people you’ll ever meet: Nedbank Group 6. What a bunch of legends.

Our group was made up of 12 riders and two guides (also on bikes but with GPS’s and ample knowledge of the surrounding area and wildlife). I was the youngest in our crew, but by no means the fittest. We got to know one another over a beer on the sunset deck. Tomorrow we’d get to know each other even better while spending around six or seven hours on the saddle together. For now, it was time to head to our 5-billion star accommodation.

On the bike, off the beaten track

You know you’ve landed with your bum in the butter when the group leader insists on waking up the team with cappuccinos. David Evans took our orders each night, then brought us out of our peaceful slumbers with a tent-to-tent delivery. Alright, peaceful slumbers for some. I’m lucky enough to be gifted with the ability to sleep through most things. The rest of Group 6, however, were treated to a symphony of snorers.

SOUTH AFRICA – ZIMBABWE ~ Approx. 50km: The first day began at 5am. After pulling on my cycling kit plus a couple of warmer layers for the chill, I headed to breakfast. I can’t stress to you enough how remote these locations were. No signal, no buildings, everything had to be brought in. So you’d think food variety would be limited. In fact, the complete opposite was true. Oats, muesli, deluxe Belgian yoghurt, fruit… a feast. And of course, I was happy to make the most of it. Every. Single. Meal.

READ MORE: How To Not Gain Weight While On Holiday — AKA Fit Travel!

Tummies popping, we lined-up for our 6:30am rollout. Each group is allocated a starting time but the Nedbank Tour De Tuli is strictly a ‘tour’, not a race. Some groups are faster than others, but the idea is to spend as much time as possible in the magical wilderness, surrounded by wildlife.

ZIMBABWE – BOTSWANA ~ Approx. 80km: Day 2 began with another coffee wake-up and bums feeling a little more sensitive. Today was a long haul and promised even more game spotting. The reality of the Nedbank Tour De Tuli is that you’re cycling through someone else’s home. The wilderness belongs to the ellies, giraffe and other wildlife. They aren’t tame and will react if they feel threatened. For this reason, no route is set in stone as a herd of ellies might mean a complete detour loop around them to avoid being flattened. The guides ensure that you are at no point in any danger, but keeping your wits about you is a must.

We were even joined by a sunbathing croc at our lunch stop. He enjoyed the sun, we enjoyed our tuna salads. Just another day in Africa.

READ MORE: “I Turned My Back On Normal Life And Went On A Radical Adventure”

BOTSWANA – BOTSWANA ~ Approx. 60km: Day 3 arrived with our bottoms feeling even more tender, but our spirits were high as we lined up for another day of Mashatu trails. Day 3 is a fun day and not too strenuous. Cyclists are encouraged to spend the day exploring and playing. And the trails lend themselves to this perfectly. Have you ever ridden a pump track naturally created by the wind on the rock? I have and I highly recommend it.

Day 3 also includes a visit to the Lentswe-Le-Moriti School, where cyclists can witness the achievements of the Children in the Wilderness programme first-hand. Plus, we got to give the kiddies backpacks for school. We all left smiling.

BOTSWANA – SOUTH AFRICA ~ Approx. 75km: It’s always with mixed feelings that you set off to end an adventure. I was extremely happy to have been a part of the journey, but also sad that it was over. That being said, the last day was still highly eventful right up until the last kay where a team member’s chain snapped and a united effort was required to cross the line. There was also a close encounter with a herd of elephants – and not just once. We crossed the line together, buzzing with the success of our epic journey and more than ready for a beer.

The ride may have been over but the Nedbank Tour De Tuli afterparty was just beginning. And already there was talk of ‘next year…’

Off the saddle, on the beer train

But it’s not all cycling. We’d arrive back at camp around 3 or 4pm every afternoon. Stories would be swapped over a beer or three before a bush shower (truly glorious outdoor showers split into male and female that are heated by the sun and operated by a pump). This was followed by a complimentary massage. Yes, that’s right – every afternoon on Tour De Tuli you’re treated to 20 mins of pure bliss while the experts at EPT recovery work on your tired muscles.

Each campsite was fully equipped with a breath-taking view which was thoroughly enjoyed with sundowners every evening. Once the sun had set in a glorious collection of fiery hues, it was time to feast again. To recap: that’s the fifth meal of the day, and somehow I always had space. Supper ranged from roast lamb to paella to steak, not to be outdone by dessert: think doughnut walls, Malva pudding and custard, chocolate eclairs. We may have been cycling a decent distance each day, but honestly, I think I put on weight! My cycling kit was definitely feeling a bit tight by Day 4. 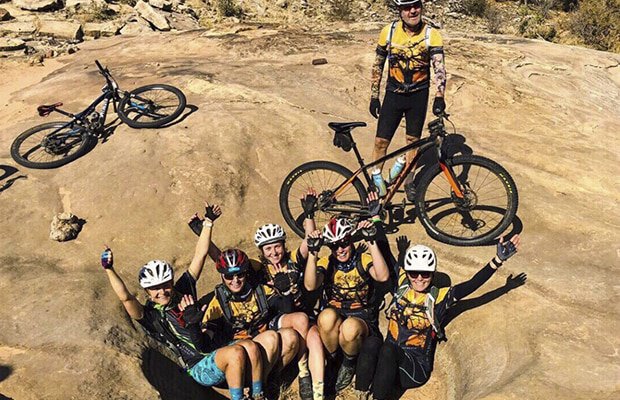 Here’s why we ride

This event is too magical to put into words. However, it’s the charity that it supports which makes it truly remarkable and herein lies the reason why I’ll be going back next year, the year after and the year after that. Children in the Wilderness: an NPO supported by Wilderness Safaris that aims to educate the young decision-makers in rural Africa. The kids will grow up to be the custodians of the wilderness – and they are the reason we ride.

Children in the Wilderness is all about upliftment – whether this is through scholarships, teaching new skills or increasing self-esteem. The funds raised at Nedbank Tour De Tuli go straight to the kids and if that’s not a good reason to ride, I don’t know what is. A pedal with a purpose makes this truly the most incredible event I have ever been privileged enough to take part in.

For more gorgeous pics and tales from the trails, click here. See you there in 2020!