“The pressure got so great that I was throwing up with nerves before every race.”

Rachel Atherton is a daredevil sportswoman. It takes a lot of guts, strength and skill to be a downhill mountain biking racing champion. She started BMX riding at the age of eight and last year, 20 years later, she became the first woman to win 10 consecutive rounds of the World Cup. She’s also no stranger to injury – in 2009, she was in a collision with a pick-up truck whilst on a time trial. She dislocated her shoulder and it took her out of the racing season for the year. We found out what fuels her, how she keeps herself strong, fit and healthy and where her next challenge lies.

Injury and illness are par for the course when you put your body through endurance training. But sometimes crazy accidents – way out of the natural environment – occur. “I had massive damage to my shoulders from the 2009 collision with the truck. I’ve had seven operations including a nerve graft, but at least when I’m injured there is a clear rehab programme to follow. And if I put in the required effort I know that I’ll be back on the bike. I have loads of expert support and they are with me every step of the way. But in 2014 I picked up a glandular-fever-type illness after World Cup Round 1 in South Africa. The pathway back to strength was less defined, it was less visible… Some days I felt I was fighting on my own and just so tired. I never want to go through that again.”

Rachel has had to place major emphasis on keeping her body healthy and strong, so she’s very mindful about what she puts in her body. “I’m massively switched on about what I eat – you can’t train and race as hard as we do without fuelling your body in the right way. When I’m at home I make sure that I eat a huge variety of organic veg, fish and meat. When I go riding I’ll always make sure that I’ve got plenty of water and snacks. There is literally nothing worse than running out of energy on the mountain. Boiled eggs and bars all the way!”

READ MORE: “5 Things I’ve Learnt Since I Started Cycling — Like How To Go Pantyless”

In preparation for race day, Rachel goes for high-carb breakfasts and snacks in between. Here’s how this sportswoman fuels her body: “Breakfast is normally a high-carbohydrate meal: porridge with some fresh berries, eggs with some gluten-free toast, maybe smoked salmon or bacon. This sets me up for the day and makes sure I’ve got some fuel in the tank! Between runs, I top up with some morning snacks, like a banana, cereal bar, flapjack, mini chicken wrap. For lunch I’ll try and have 1/3 carbohydrate, 1/3 protein and 1/3 salad or greens – this is to keep the fuel coming in and also start to get the recovery process under way. Once I’ve finished timed training or a race run, I fire in some ‘quick carbohydrates’ – like a recovery shake. Dinner is pretty much the same as lunch and then, just before I go to bed, I will have a high-protein snack to promote recovery. Liquid intake is really important . I drink water and herbal tea throughout the day and a Red Bull pre-race.” 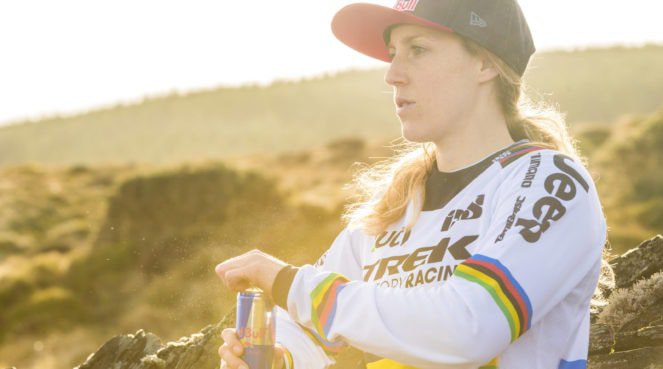 READ MORE: These 10 Local Fitness Gurus Will Inspire You To Live Your Best Life

“The tracks on the circuit are so wild I have to make sure that I’m physically strong enough to withstand not only the demands of race day but also the training itself! My recent exploits at the World Cup in Monte Sainte Anne are proof that you need to be strong to hold onto the bike when it’s trying everything it can to throw you off!”

“Having a run of two years undefeated in international competition was amazing – the perfect season – and those 16 consecutive World Cup and World Champs wins is something that no-one can take away from me, but the pressure got so great that I was throwing up with nerves before every race. But I’d urge everybody to give racing a go. It’s awesome and nothing will ever compete with that feeling!” Rachel’s training programme is based on three key components that can be applied to all kinds of training and sport. When you’re training – whether it’s for a run, triathlon, cycle, you need to manage your strength, energy stores and condition your body, so that it’s ready for whatever gets thrown at it on race day. Here’s how Rachel does it:

I’ll typically hit the gym twice a week to work on whole body strength. I’m probably lifting less in terms of the load on the bar but I’m learning to shift it quickly.

This is one aspect of the training that I have to admit I don’t always enjoy but it’s an increasingly important area. In the off-season we get a lot of work done on the static bike but once the season kicks off it’s about time out on the cross-country and downhill bike, getting runs in. This year has seen me doing less distance – something that I’ve always enjoyed – in favour of shorter, sharper efforts, which can be unbelievably nasty! I dread those sessions!

This is probably all the other bits and pieces that I need individually as a rider to keep me race-ready throughout the season. I’ve clocked up a lot of kilometres on my body and there are some things that I will need to do differently to every other rider just to be able to get on the bike!

Looking for more? Here are the pro cycling hacks you need.