Getting out of the comfort zone...

In December last year, I was asked to do an adventure race. I like the sound of anything with ‘adventure’ in it, so I immediately agreed. Back then, March seemed like ages away. Most of January was spent carrying on with the festive trend – a few too many parties and way too many drinks. Suddenly it was February and the finer details of the race that I’d committed to started getting a little scary…

What is a 24H adventure race?

As the name suggests, you spend 24 hours racing. I’m talking real hardcore sh*t. It’s a mix of trail running, scrambling, paddling and cycling. A bit like an adult treasure hunt, you use a map and compass to locate checkpoints along the route. Once you’ve found these numbered checkpoints, you record them on your passport. Don’t forget to snap a selfie with it for proof, plus these pics are hilarious to look back on.

READ MORE: “I Turned My Back On Normal Life And Went On A Radical Adventure”

Our 24-hour adventure race would cover around 170km split over the different disciplines. Location: the middle of nowhere for the majority of the race, Tulbagh area. In other words, no bathrooms or other such luxuries. Rather boskaks and squatting. My period also decided to make an appearance just before race day. Being the only girl in my team, I was fuming at my body for functioning so punctually. Just another challenge to overcome. Maxi tampons added to the pile of growing adventure kit, and I was finally ready – gear-wise anyway. 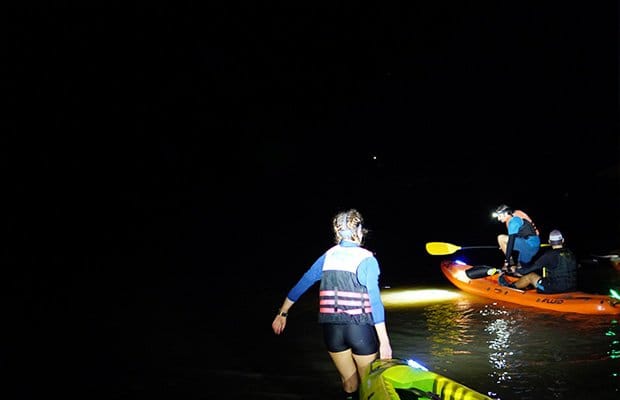 I arrived at the campsite where the race village was alive and vibing around 5pm on Friday. Registration would start at 6pm; briefing at 10:30pm. The race would kick off at 12am and we were yet to find out what would be the first leg of the race.

Each team is presented with a crate. Everything you need for the race needs to either be in this crate, on your bike or on your back. That means enough food for 24 hours, kit for paddling, running and cycling, plus other essentials such as sunscreen and nut butter (not the edible kind and also, not for me).

Our kit was packed by 7pm. We enjoyed a good beer and boerie roll (high-tech race nutrition right there), then headed to bed for a nap. Napping, however, proved a tricker task than anticipated. Music, people arriving and unpacking, plus nerves, makes for a very restless sleep. I managed to get about an hour’s rest before my teammates woke me up with loud shouts of coffee. (They know it’s the only thing that will get me up.) 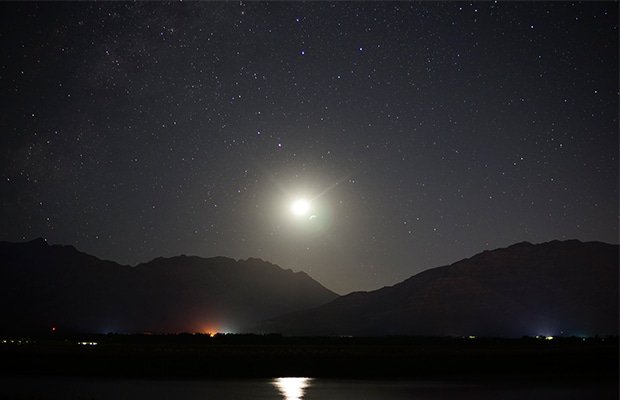 From naps to maps

Adventure races have a slightly different format to other events. At other events, the route is generally already established. In this case, not so much. It was only after the race briefing that we finally knew where about we’d be travelling over the next 24 hours – on paper, at least. Kevin would be our navigator (luckily he’s a pretty decent human GPS). The air was crackling with excitement and anticipation. Just a few minutes until go time.

12am: The 24h adventure race began with a 5km run. Most people opted for the gravel road route to checkpoint one while a few chanced the shoreline. With our first selfie snapped, we headed back to our kayaks, ready to hit the water. Side note: I’m not much of a paddler. I’ve had a bit of fun splashing around on the occasional holiday, but nothing close to 15km. This would be interesting…

READ MORE: Your Guide To Training For A High-Elevation Adventure

Kevin located our first destination and off we set, into the murky, black water lit by a blanket of stars. That’s when the true magic of this sport hit me – the complete magnitude of the glittering sky and the inky water that we were slowly but steadily crossing. Luke and Mark’s boat ahead of us with its glowstick was our only reference. There were other teams out there, but they were hidden in the darkness. 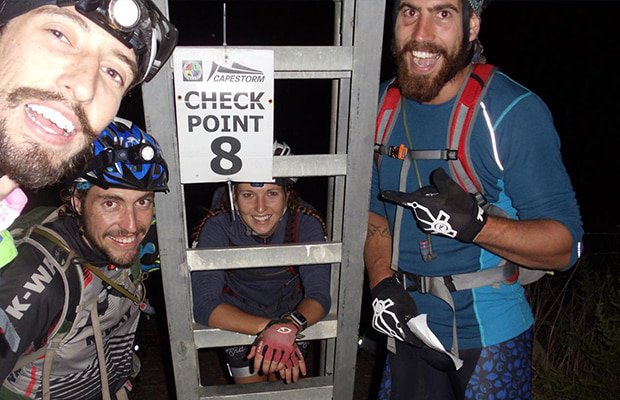 There were three checkpoints on the dam that we successfully located and captured. After a minor incident in which Kev and I managed to get stuck on the only rock in the dam, it was time for the cycle section. Night riding is another incredible experience that I’d forgotten how much I enjoy. Your sole focus is the ground lit up by your bike light and the kilometres you’re covering.

By 8am we’d covered a total of 80km (running, cycling and paddling). My favourite moment of those first eight hours was the sunrise: Rolling fields, golden skies and the ridiculous banter of four crazy adventurers as we pedalled towards the run.

We reached the transition zone where our trusty crate was waiting, still feeling fresh. A quick strip out of cycling gear and into running kit – which posed another potential problem… I don’t wear underwear when I cycle for maximum comfort on the bike. This made changing a little trickier. After seeing how chilled the guys were though, I thought: No double standards. If they can, I can. Right there, I tied a top around my waist for a little privacy, bare bottom to the wall and changed. Clothed, fed, watered and with new maps acquired, we were ready for more trails, or lack thereof…

READ MORE: This Woman Is About To Run A Gruelling 251km Race

Bunderbashing – a major part of my childhood and a major part of the 24h adventure race, but this was next-level prickly. Most of the plants were taller than me and it was a ferocious fight to get through certain sections. We managed to find all the checkpoints on the run section pretty quickly though, and around 100km down we found ourselves back at the transition zone. And then back on our bikes. 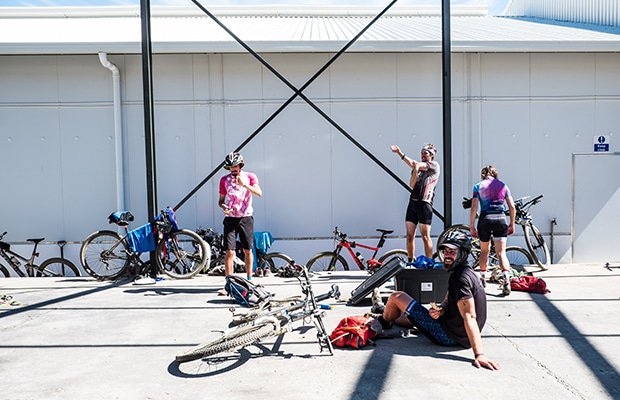 On the second leg of the cycle, we had around 45km to cover. We’d moved up a few places on the leaderboard and spirits were high. But that was until we were faced with a monster hill – described in many a curse word as we ascended. If it had been ridable, it would’ve been okay, but it was the rockiest mofo you can imagine and required a new discipline: hike-a-bike.

By the top of this climb, team morale was at an all-time low. We were still determined to klap the rest of the checkpoints though. However, that determination was diminished slightly when we were told that we had to short-course our race. To prevent our 24-hour race being a 30-hour, we had to skip a few checkpoints and essentially make the route shorter for ourselves. From then on the tiredness really set in. And so did the madness. 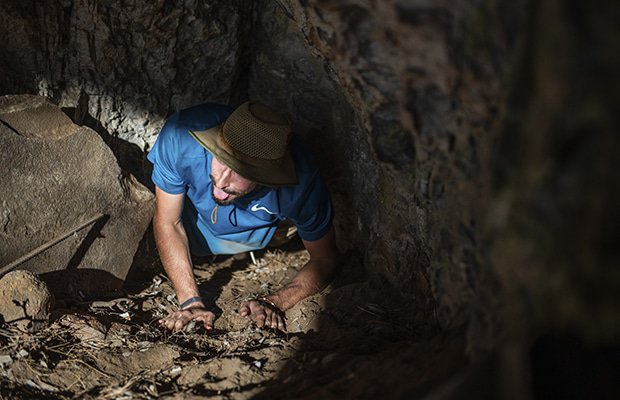 For the night is dark and full of terrors

Our last challenge entailed hiking up and over the mountain that stood between us and cold beer at the finish. It was yet another case of making a path rather than finding one. “Ouch” and other four lettered words became our main form of communication. It was dusk by the time we reached the base and just one checkpoint was left. This one was waiting for us in the middle of a gumtree plantation, on a bus. The forest was rather eery in the twilight… and in our sleep-deprived state. I can confirm that sleep demons are real. Your mind becomes the ultimate trickster and fantasy becomes indistinguishable from reality. At one point I felt a shrunken, shrivelled hand clasp mine. I didn’t even panic – too tired to fight the horrors of the night.

READ MORE: “This Is What Jumping Out Of A Plane REALLY Feels Like”

The final stretch of our homeward bound journey was a simple matter of walking around the dam to the yacht club where we’d started 24 hours earlier. Easier said than done, however, as we sleepwalked onward. I began weaving like a drunkard and it was only a matter of time before I fell over and slept where I landed. Luke got out a handy tow rope and attached it to the front of my hydration pack and the back of his. I was towed at a sleepy jog for the final stretch of our epic journey.

After scrambling over and under the last barbed wire fence of the day, we found to our great relief that we had indeed been heading straight and true. There lay the yacht club. We crossed the grass to the race village at a run, celebrating the longest 24 hours of our lives. Beers were waiting and so were our much-needed beds.

If life does begin at the end of your comfort zone, then we were well and f#cking truly alive.

If this sounds like your kind of adventure then join us, team Clueless but Keen, at Gariep Dam in June for our next 24h adventure race.