These 5 Brands Are Empowering SA Women In SUCH Epic Ways

There was an explosive reaction to gender-based violence in South Africa roughly a month ago, but now besides the diehard activists, all seems calm on the western front. Most women (myself included), are at a loss as to what to do to make a difference. I for one, refuse to go back “to normal” and pretend that everything is okay, because FYO – it isn’t. Until we stop hearing about gender-based violence (GBV) on the news every day, we have to do something. Here are a few ways that brands are aiming to empower the women of South Africa – and how you can get involved..

The Pinky Promise Movement is a campaign against GBV. How do you get involved? Simply paint your pinky fingernail black and donate to the campaign. “By making the Pinky Promise, you signal that you’re accountable and an advocate for good,” says Chris Thorpe, director of the movement. “I think it’s exciting how something so commonplace [as painting your fingernails] now has a deeper meaning.” This concept has snowballed and many brands have become involved.

Hope on Hopkins distillery has created a cocktail for the movement. “Bartenders are starting to realise the role they play in something like gender-based violence,” Chris continues. “They’re the gatekeepers. Sadly [at bars] is where a lot of the problems start. Brands talk about drinking responsibly — I think this is also a form of brands showing responsibility.” Absolutely. When you order a Pinky Promise cocktail, not only are you reminded about the campaign, but R10 will go to the movement. “Doppio Zero is going to launch these cocktails at all their restaurants country-wide,” he adds.

Dermalogica and OPI have come onboard to get those nails painted! And that’s not the only way Dermalogica is involved. This brand has a worldwide initiative to empower women and provide them with financial independence through education. FITE is a Pinky Promise beneficiary and will combat GBV by providing tangible skills to the women of SA.

Along with this, FAN (Father A Nation) is the other equally vital beneficiary. This NPO equips and inspires men to be great fathers, role models and mentors who use their strength to love, serve and protect. Research has shown that fatherlessness is the biggest driver of violent crime globally. Close to 60% of South African children are growing up without present and engaged fathers. Unwittingly, we have been growing an army of sociopaths. Together we can change this.

for her. ⠀⠀⠀⠀⠀⠀⠀ by Liv & Light + ESJAY — This range is a response. A response to gender-based violence and oppression. We are two ‘small’ businesses using our platforms and means with the hope to make some kind of difference, because we believe we have a responsibility to STAND up and continue the FIGHT that so many before us weren’t able to. This range aims to bring awareness and raise funds to help women who are victims of violence and abuse in South Africa and around the world. The print is made up of faces of some of the women who have succumbed to this fate in our country. — ALL profits of this range will be donated to two organizations who provide care and support for women in their communities. — This range protests CHANGE + LOVE. It’s; for her, with kindness, courage and strength. — shop now; www.esjaysports.co.za ⠀⠀⠀⠀⠀⠀⠀ Print designed by architect and creative; @katiegracehall @grace_architecture

“With the recent grotesque acts of GVB that have made their way onto the news, and into our homes, we (and all other women of SA, it seems) were left feeling so sad and shaken, but also helpless,” says a spokesperson for the collaboration. Along with that came a feeling of wanting to fight back, but not knowing how. “That’s when we came up with the idea for the ‘for her’ range.”

ESJAY and Liv & Light both felt that they had a social responsibility to use their platforms for good. “It’s easy to hide behind ‘well, we’re a clothing brand so we have nothing to do with this’, but I truly believe that if you are a woman in South Africa, no matter your vocation, you have a responsibility to speak up and join the movement,” says the spokesperson. “Because, after all, silence is also a statement, right?”

Together, the brands decided to create an activewear range to raise funds for two crisis centres (Angels Care and Jes Foord Foundation) that help women and children who have been victims of abuse and violence. “While our primary objective was to try to raise as much money as possible to help women like this. This movement was definitely also our own personal pledge to continue the conversation.” 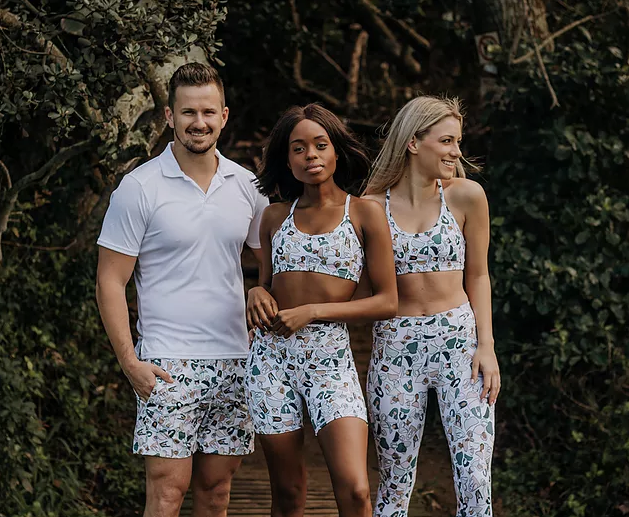 Shop the 'for her' range.

“The print is very unique because it’s made up of the outlines of some of the women who have fallen victim to gender-based violence in SA.” Created by Katherine Grace Hall, the hope is that women and men of SA will support the range and “wear these women” in a spirit of love, and of protest.

One of the reasons girls (and women) drop out of sport is that they lose confidence in the way they look. We need to take the focus off of bodies and put it on competing, being active and having fun. And coaches have to be aware that there is a big difference between coaching boys and girls! . . . #challengeaccepted #womeninsport #confidence #active #fitness #fun #competition #bodyimage #sports #thriathlon #swimming #cycling #running #rowing #olympic #paddling #weightlifting #powerlifting #girlswholift #womensupportingwomen #coaching #highschool #keepactive #loveyourselffirst #challenge #brave #womeninspiringwomen #EqualityCantWait

Girls Only Project (GOP) is a non-profit company that focuses on empowering female athletes. “We wanted to highlight the challenges that women face in sport, and how they are overcoming them,” says Dr Kirsten Van Heerden, director of GOP. “Too often topics such as periods, breasts, body image and mental health are avoided in sport and GOP provides a platform for women to engage with very real issues and share their experiences.” The campaign currently has eight ambassadors, who are all current or former elite athletes dedicated to sharing their journeys, whether this be equal pay or mental health awareness. “We want girls and women to know that they are not alone in their challenges and to draw inspiration from others,” she continues.

The GOP is active on all social media platforms and it has its own website. This space is available for women from any background to share their own story. “You don’t have to be an Olympic athlete,” Kirsten adds. “The more awareness and continued conversations we can generate, the better we are able to combat the difficulties women face.”

Being a female athlete comes with many difficulties. “We have to cope with periods,” Kirsten begins, “buying good sports bras, not getting the same media attention as our male counterparts, [objectification], just to name a few. [In the same breath] however, we are able to push our bodies to new limits and find happiness in our sports. My encouragement to all women is to support each other.” This can be an encouraging message to your friend or calling out those using sexist language. “Don’t gossip about how other women look while playing sport (it is so sad but we can often be our own worst enemies),” she concludes. “We need to have each other’s backs.”

Ciovita is every cyclist’s go-to brand when it comes to choosing kit. Not only do they have super-comfy gear, but it’s also stylish. As a female cyclist myself, I know how challenging it can be as a woman to actually be taken seriously in the sport. So it’s refreshing to know that Ciovita doesn’t only support women in cycling — they also look at how they can empower women of SA.

“Out of the 98 staff we [currently] employ, 82 are female,” Karlien Spamer says. She’s the design executive on the team and proudly tells me about how all the women’s kit is designed specifically for women’s needs, with input from cycle-enthusiastic women every step of the way. “We are also continuously working with other brands and events to create a bigger, better space for women in the sport,” she adds. “Instead of making it about us, we want it to be about women’s cycling and feature brands that share this vision, as well as giving inspiring women a platform to share what they have to offer.”

Recently, Ciovita has partnered with vida e caffé for a Wednesday morning MTB ride starting from vida on Roeland Street at 5:30am and obviously ending back there for a coffee (which is free!). “These Wednesday rides started as a way for us to try and create safe spaces for women (and men) as a direct response to the horrific events over recent months,” Karlien explains. “Cycling is a [great] way to process the things going on in your life, and [we] wanted to offer women the chance to ride with [us] in the safety of a group.”

“The Forbes List of Most Innovative CEOs this year had 99 men and one woman,” says Danielle Weakley, Women’s Health editor and Go Hustle boss babe. “We should all be wanting to see that shift.” But according to Careers24, there are 415 000 female job seekers between the ages of 16 and 25 who are all looking for that same career kick-start — mainly without success. This is what sparked Go Hustle, a platform to empower women of SA. “It’s a digital content platform to help young female boss babes land the career of their dreams,” Danielle continues. “Or kick-start their side hustle into an entrepreneurial journey.”

“The platform is freely available to use, [the aim] being connecting young women just starting out and the corporates and entrepreneurs who want to be giving back to their younger selves,” she explains. After a very successful launch just over a month ago, the website and social media platforms have already been instrumental in securing a handful of internships. “It’s been amazing to see it in action.”

Danielle has had plenty of experience in the industry and as a highly successful boss babe herself, she’s able to give killer advice to fellow hustlers. “[You need to] be brave and don’t be afraid to ask for what you want,” she advises. “But also, start small, fail quickly if you must, be flexible and try and try again!” Even though it can often seem like a corporate man’s world, there is the power of community. “Use that to your advantage — it’s where the magic happens,” Danielle concludes.